Sister Act by Orpheus opened Friday night for a two-week run at Meridian Theatres @ Centrepointe. This musical, based entirely on the hit Hollywood classic by the same name, is the latest in a long run of fantastic Orpheus productions. Since beginning theatrical reviews on Covert Ottawa Guy, I’m continually gaining a greater appreciation for what goes into creating an unforgettable theatrical production, and have learned there are many recipes for greatness. Orpheus has nailed it again! This is one of my favourites that they have done! With a perfect mix of incredible talent, fantastic music, and high-quality costume, set, and lighting design, they continue to keep the bar raised to the very top, constantly challenging themselves to out-do their last success.

When movie-inspired musicals get released, many follow along the same cinematic story line, some stray a little with some artistic interpretation, but some go right off the plot in a completely different direction. Sister Act was the former with nearly identical ties to the movie plot, but it really doesn’t matter if you’ve seen the film or not; the story is great, the acting is great and it’s just 100% enjoyment from start to end. The only thing lost without having seen the movie is an appreciation for how similar it is to the movie. Now, don’t let that scare you away: they add their own comedic influence with new songs and additional hilarious scenes, but the plot remains the same as the fantastic original. 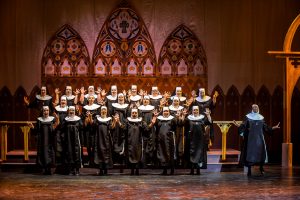 First off, I want to mention the lesser-appreciated aspects of a successful production. As you know with Sister Act, the songs and music are the backbone of the story, and there was no shortage of talent here. The orchestra was unbelievable throughout the entire musical, I absolutely loved the music. The songs, and more specifically, the lyrics were hilarious! I’m not a Catholic, so I know that a few of the jokes were over my head (based on the audience laughter around me), but I caught enough to know just how funny it was. I’ll get into the singing quality below. The choreographer, Debbie Guilbeaut, deserves a special mention as well. With a cast of this size, there’s no doubt that even with experienced entertainers, there are different levels of skill in singing, dancing and performing in general. Having seen a huge number of shows in the past few years, I have noticed that the choreography often seems to be too difficult for a small few of the less experienced dancers, and it becomes painfully obvious come showtime. But once again in Sister Act, Orpheus has NAILED the art of simple, yet highly entertaining choreography; it was spot on and looked incredible. The numbers with the nuns were slightly more complex, including an awesome pinwheel and some beautifully executed line changes, and even a little bit of acrobatics! But for the rest of the show, the choreography was at an appropriate level for the entire cast: no one struggled to keep up, and every number looked amazing. I wish that other theatre companies would take note of this fact: simple is best! Guilbeaut really impressed me with this show! 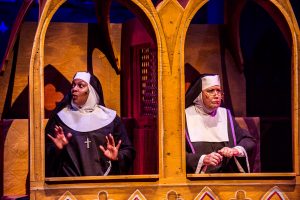 I also want to mention that once again Orpheus has gone above and beyond with their set quality. One of the things I mention in every Orpheus review is that they have amazing sets and props! (See the car in Chitty Chitty Bang Bang). Sister Act is no different (although no elaborate car since it didn’t call for one!), but the back-drop, furniture, and props were all perfect! This was no surprise though: Sally McIntyre is an experienced set designer, and this is her third Orpheus show at Centrepointe. The costume design followed suit! Although it may seem simple to have a bunch of nuns in costume, the quality of both the (constantly changing!) habits and the other costumes were all great! I particularly enjoyed the sparkle and pizazz of Delores’ costumes, and the very 70’s fit of the men’s suits! Pauline Doggett and Susan Cole really did a great job! I also need to mention the lighting, which was used so perfectly in this show. There were often beams of light streaming across the stage, reminiscent of a real church, where light streams in through stained glass, and also, the way that the light illuminated the sisters often made it seem as though the light was shining down from heaven, which I thought was a great touch!

And now for the meat and potatoes of the review: my stand out performances of the night! I had no trouble in deciding who to start with! The performance by Damien Broomes, who played Lieutenant Eddie Souther or “Sweaty Eddie” was for me, the highlight of the show. He was once again outstanding. I remembered him immediately from his role as “Donkey” in Orpheus’ “Skrek: The Musical”. He is such an incredible entertainer and provided an all ‘round amazing performance. And that’s even before he sings! His voice is incredible! One of the highlights of his entire performance was his singing in “I could be that Guy”. The whole audience was mesmerized by his voice. Wow, just wow! I look forward to seeing him as a lead role in a play one day. I’ve said it before and I will say it again: Broomes could be on Broadway. 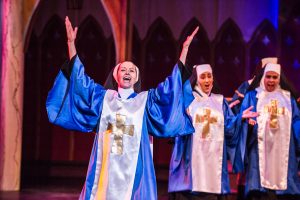 Keeping on the “great voice” theme, a shoutout is also due to Reba Sigler who played Sister Mary Robert. You may remember this character from the movie; she plays the role of a quite and timid postulate within the nunnery who struggles with trying to figure out her place in the world. Sigler was perfect for this role, and even looked just like the character from the movie (from our seats anyway), so again a kudos to the costume design team. Sigler opened up in “The Life I Never Led,” showcasing her amazing vocal range and power. The audience was very impressed and could be heard murmuring their awe at the end of the piece.

Next up is a group shout out to Andrew Portolesi, Adrien Pyke, and Brian Mumu who were part of the ensemble, but excelled in their roles of TJ, Pablo, and Joey (respectively). These three goons were hilarious, and although this whole Sister Act performance was really funny, they provided even more comedic relief. They worked so well together, and almost felt like a bunch of misfits who’ve been doing this all their lives. Their antics and ridiculous scenes made for an enjoyable interlude, even though they were still part of the main story. 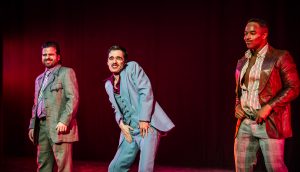 I also need to mention two stand-out performances within the Queen of Angels Church scenes. Sister Mary Lazarus played by Allison Fagan, and Monsignor O’Hara played by Mike Kennedy also added some comedic genius as they morphed throughout the show from their more reserved characters into extreme hip-hop versions of their former selves. It was hilarious!

Finally, this review would not be complete without mentioning the obvious star of the show: Jerusha Lewis, as Deloris Van Cartier/Sister Mary Clarence. She was the perfect choice to recreate the character made famous by Whoopi Goldberg! Lewis is an awesome mix of talent with clear skills in dancing, singing and performing; she truly embodies the essence of this iconic 70’s showgirl! She was absolutely brilliant and had a major role in making this musical the success that it was!

Sister Act, running March 8th – 17th, is another of Orpheus’ must-see shows. It will have you laughing continuously while the plot leaves you wondering where it will go next! (assuming you haven’t seen the movie or course!) It was such a great performance, and with quality that rivals every Broadway level production that I have seen, is worth every penny of the cost of a ticket! Meridian Theatres @ Centrepointe is a great location, close to the highway and easily accessible from all corners of the city. They offer plenty of free parking, with friendly and efficient staff to help you with any of your needs. It’s a perfect location for an incredible musical!