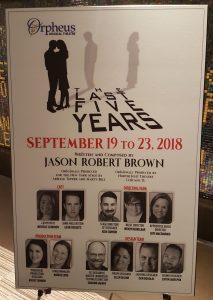 I just took in Orpheus Musical Theatre’s production of The Last Five Years, on opening night, Wednesday September 19th in the Meridian studio theatre at Centrepointe. For those of you who are unfamiliar with the story, it is an intimate look at a couple’s tumultuous relationship over the course of five years together. The story is told both from the end of the marriage, by wife Cathy, and simultaneously from the beginning, by husband Jamie. If you are unprepared for this, it can be slightly confusing, but the program offers a timeline from 2014 to 2018, with the songs alongside the date, so that they audience can follow along as to what is occurring at each period in time. I found this to be extremely helpful! This show is a rollercoaster of emotions; anyone who has been in love, or who has lost a love, will be able to relate. Despite the sad tone set by the dissipation of a relationship, The Last Five Years has a number of great moments, and overall, it was a great performance. 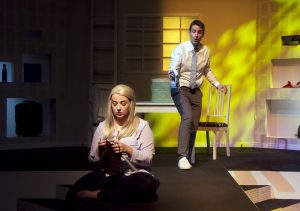 This show features only two cast  members. Cathy, the wife, was portrayed by Michelle Gendron, and Jamie, the husband, was portrayed by Louie Rossetti. I cannot emphasize enough the amount of talent that it takes to command a stage and captivate an audience for 80 full minutes, with no intermission or breaks at all. These two are infinitely talented, and captured my full attention for the entirety of the performance.

Gendron really brought the emotion of this heartbreaking story to life. From her beautiful, powerful vocals to her emotive facial expressions, the audience could feel the incredible pain accompanying the end of this woman’s marriage. Despite the sad moments, however, Gendron wowed the audience with her charisma and humour in a number of songs. She appears to be unbelievably talented: singing, dancing, and acting throughout the show, not missing a beat. There were a number of ‘goosebump’ moments during her songs. Just an incredible performance overall from Gendron. 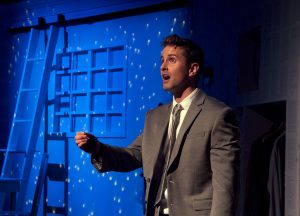 Rossetti is equally talented, but brought a different perspective to the show. Seeing things through his eyes, as he celebrates finding his true love, succeeding in his career, and meeting someone new, provided insight into the ups and downs of life, and how they can impact our relationships with others. His innate ability to express joy, love, unhappiness, discontent, guilt, and remorse in both his expressions and his voice brought a depth to the character of Jamie that really allowed for the audience to feel for him, regardless of the poor choices that he made. Rossetti’s vocals, too, were spectacular. I can imagine that it was a tall order for Orpheus to cast a male that could meet Gendron’s talents vocally, but they met this with Rossetti. He is an outstanding actor and singer, and portrayed this character perfectly. 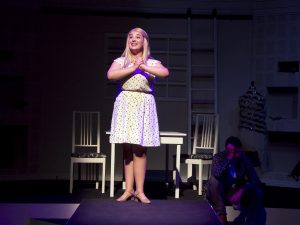 I have to mention the orchestra, as they were outstanding! Under the direction of Wendy Berkelaar (keyboardist), Ethan Allers (cello), Tessa Bangs (violin), and Gabriel Leury (electric bass) filled the theatre with the soundtrack of The Last Five Years, and every note was perfect. The small theatre lent itself beautifully to the music of this show, with phenomenal acoustics. One thing that I have noticed at many shows is that the orchestra can overpower the actors, but this was not the case at all here. These musicians are true artists, and accompanied this show beautifully. 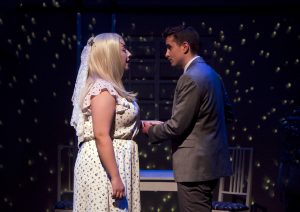 For a show that is often considered ‘simple’, given its limited cast, set, and costuming, I found The Last Five Years to be anything but! The set design was very innovative; just the one set was used for the entirety of the show, with small details changing as the two characters moved prop items and chairs around, creating different scenes within the same general construct. This was very creative, and eliminated the need for stage crew between songs/scenes. Everything about The Last Five Years was enjoyable, from start to finish (or finish to start, whichever way you are reading the timeline!) I would highly recommend seeing it! Running this week only at Meridian Studio Theatre at Centrepointe, don’t miss your chance to see this unbelievable show!