Something About New York 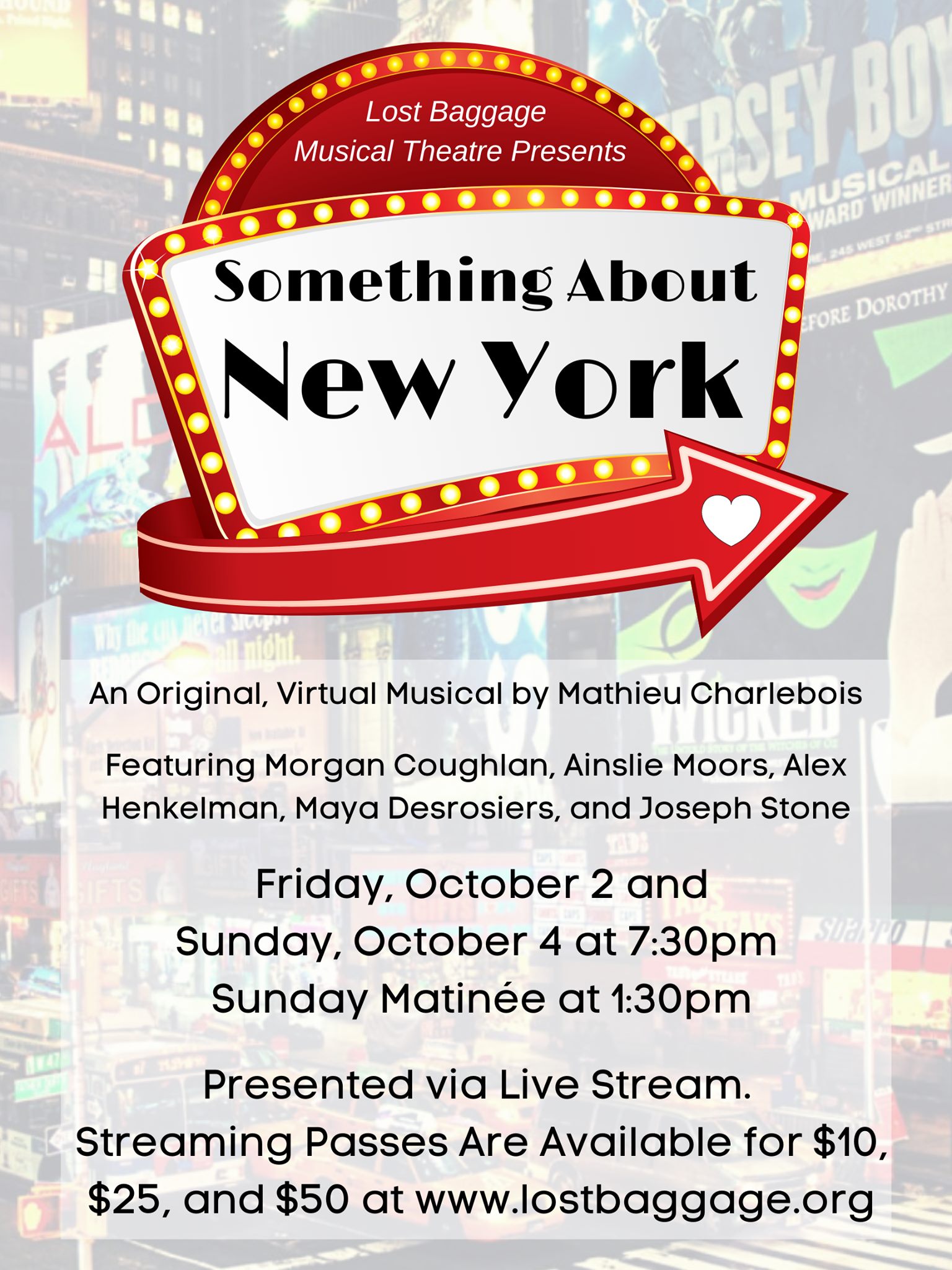 SOMETHING ABOUT NEW YORK
An Original, Virtual Musical by Mathieu Charlebois
October 2 and 4, 2020 | Friday at 7:30 | Sunday at 1:30 and 7:30pm
Live-streamed from Rice Hall at Orpheus House. Live-stream passes are available available for $10, $25, or $50 (pay as you can) at lostbaggage.org.
“Something About New York” is the combination of two original musicals composed by Mathieu Charlebois and friends for the Ottawa Fringe Festival. The first musical, “The Drunk Text” was performed as part of the 2018 Fringe festival. The second show, “Chaz’s Lush Life” was intended to be performed in this year’s festival, which was cancelled due to COVID-19. As the two musicals use the same characters, the two story-lines have been intertwined to create an all new full-length musical which features many original songs as well as numbers from other musicals such as, “Sunday in the Park with George”, “Bare: A Pop Opera”, and “Anything Goes”.
The show begins as Chaz is finishing the final exam of the last year of his undergraduate degree. A major struggle for him has been coming to terms with his sexuality and feeling confident enough to share it with his father. Meanwhile, Dylan is feeling pretty carefree as he has just dumped his ex-fiancé, Melissa (who happens to be a friend of Chaz, unknown to Dylan) and has moved to New York to pursue a career on Broadway. Upon his arrival, he sub-lets a room from Nicole, Chaz’s sister. Nicole, being the concerned, kind-hearted person that she is, takes Dylan under her wing and convinces Chaz to visit her in New York in an attempt to ease his anxieties. Before Chaz’s arrival, Dylan admits that he is open to new “experiences”, which propels Nicole to play matchmaker with Dylan and Chaz (she is pretty convinced Dylan is gay…). However, her plans are quickly thrown awry when Melissa shows up seeking revenge on Dylan. Unfortunately, Melissa is not as strong as she originally thought and begins to fall back in love with Dylan. But will Dylan fall back in love with her? Or is he content exploring things with Chaz and his new life in New York? And will Chaz come to terms with who he is and find the confidence to free himself? Find out by joining us on this fun, uplifting rom-com musical adventure!
CAST
Chaz Wilson: Morgan Coughlan
Nicole Wilson: Ainslie Moors
Dylan Raddatz: Alex Henkelman
Melissa Faught: Maya Desrosiers
Ernest Wilson: Joseph Stone
CREW
Director: Mathieu Charlebois
Assistant Director: Niamh Webber
Stage Manager: Troy Arsenian
Camera Technician: Claudia Carino
Accompanist: Galen Cussion
Percussionist: Jason Sedlar
Props Designer: Tanys Coughlan
Share
Tweet
Pin
0 Shares
+ Google Calendar+ iCal Export