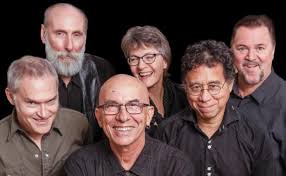 Sneezy Waters has been playing sold out shows for many years at the NAC’s Fourth Stage.

He plays with “The Very Fine Band” consisting of Dave Bignell and Vince Halfide – guitars;

Ed Bimm – keyboards; Ann Downey – upright bass; and Peter Beaudoin – drums.
Sneezy’s latest CD entitled “SNEEZY WATERS LIVE” is available at sneezywaters.com and at Compact Music. (It was recorded live at the Fourth Stage).
Legendary Ottawa- based folksinger Sneezy Waters grew up in a musical family; his mother Helen, played piano and sang, and his father John had sung in the Hart House Glee Club. Along with brother John and sister Julie, weekends were spent singing many styles of folk songs together.
Since 1976 Sneezy has been a member of IATSE Local 471 and in 2018 he received the Lifetime Achievment Award from CFM Local 180.