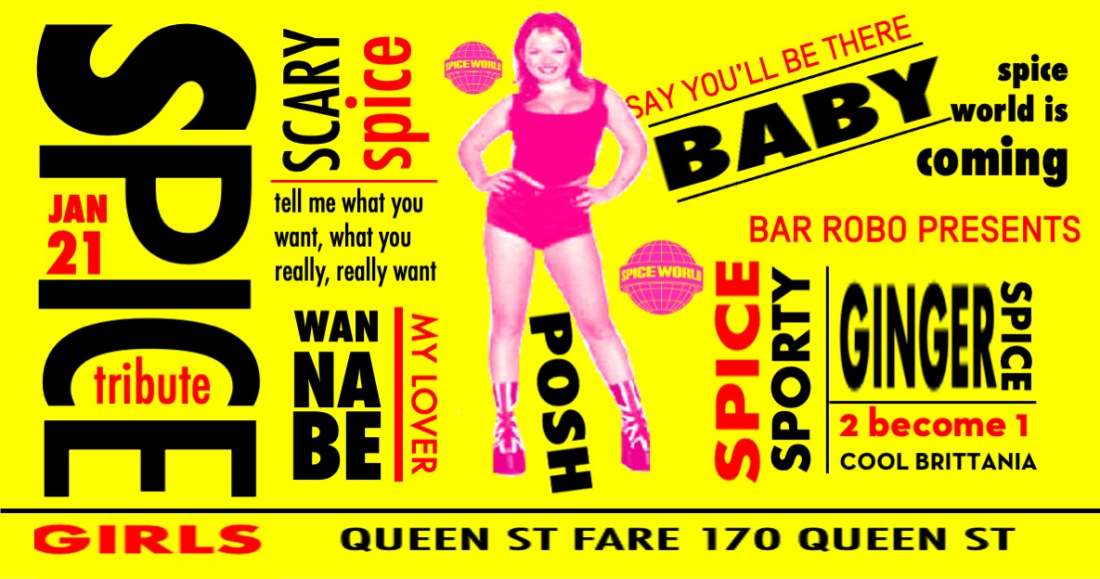 Doors at 7PM!
$25 advance, $35 Door!
Hold on to your knickers, Simply Spice is North America’s most Authentic Spice Girls tribute band!
The Spice Girls have sold 85 million records worldwide, making them the best-selling
female group of all time, one of the best-selling pop groups of all time, and the biggest British pop success since The Beatles.
Simply Spice is made up of 5 talented performers whose love of the UK quintet led them to the formation of the band.
The group started as a simple idea on route to a gig. At the time they were
performing as various other pop stars. While jamming to Spice Girls together they realized this was a dream for all of them, but it would be a while before coming to fruition.
Fast forward 3 years and the idea presented itself again. With Scary, Sporty and Posh ready to take on the world, they needed two more. Recruiting a fellow musician and tribute artist, Baby Spice was a no-brainer. Finding the sassiest personality of the group was certainly a feat. After a year they found the perfect Ginger to make the band complete.
The World wasn’t ready for the pop supergroup to disband, and that is why Simply Spice have meticulously recreated a show so authentic you will think you have time traveled back to the 90’s.
Pop and synth based with a fusion of R&B, Funk and disco, Spice Girls music is perfect for all ages and events.
Get ready to bust out the glitter, throw up a peace sign and yell “Girl Power!”
Share
Tweet
Pin
0 Shares