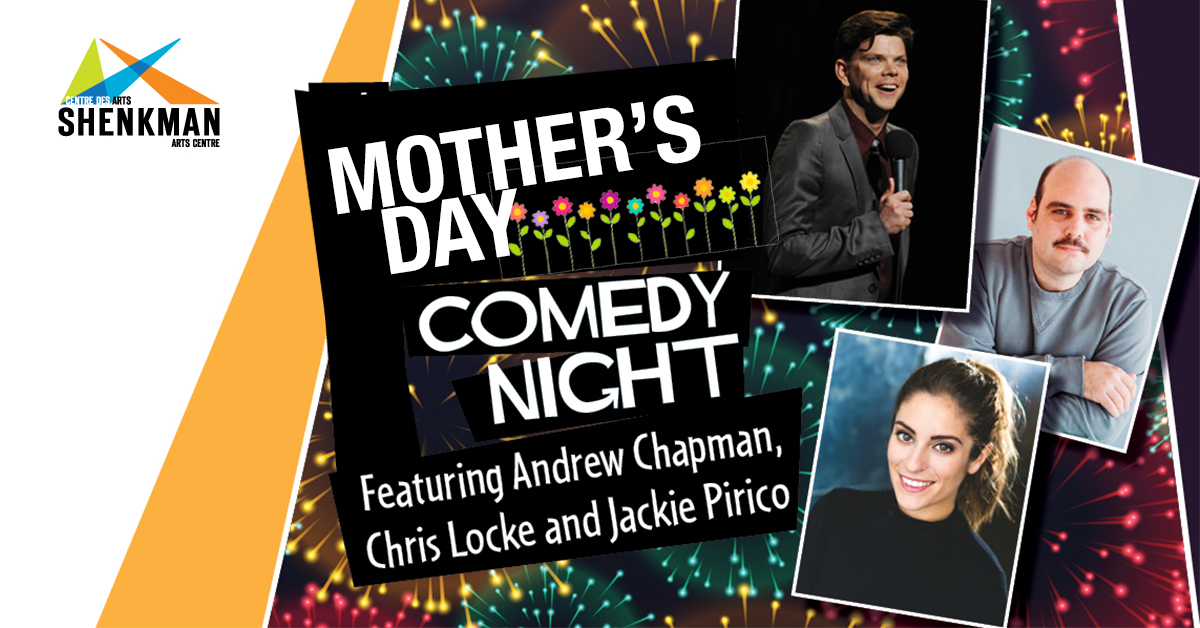 With an abundance of caution due to current Covid 19 numbers, we will be re-scheduling the New Year’s Eve Comedy Night (Dec 31) to Sunday May 8. Hold onto your tickets as we present you with a night of side splitting laughs with a triple bill of top shelf Canadian comedians to take you to your happy place. Besides it’s also Mother’s Day so some may want to load her in the car too! Andrew Chapman, Jackie Pirico and Chris Locke are comedy gold road warriors whom have Just For Laughs to CTV experience and promise to make this a night to remember!

Tickets continue to be on sale.

Join these great Canadian comedians at the 10th Annual New Year’s Eve Mother’s DayComedy Night, which will have you smiling from start to finish.

Headlining the show is funnyman Andrew Chapman. Having entertained in comedy clubs since his high school days, he has since been the host of television programs for YTV, CMT, Nickelodeon UK and Disney XD and you may have spotted him on a few other TV shows, too. To add to that, he says one of his proudest moments in comedy was performing for the RCAF Troops in Kuwait for the Christmas Holidays alongside Canadian music legend Loreena McKennitt.

Now you can catch him on CBC Radio and SiriusXM with tracks from his Canadian Comedy Award-winning album Oh Yeah, This.

This award-winning stand-up comedian will have you roaring with laughter. He has appeared at the Just For Laughs comedy festival in Montreal, Winnipeg Comedy Festival, as well as headlined the JFL42 festival in Toronto. He is also a regular on CBC Radio’s The Debaters, and recently filmed a half hour comedy special with Just For Laughs which will be premiering on Crave in 2022. You may have seen him on shows such as Workin’ Moms and Baroness Von Sketch as well.

Named by Exclaim! Magazine as a quickly rising force in comedy and an “adept comic scene stealer” by The Hollywood Reporter, Jackie Pirico delights audiences with her oddball material and disarming style. With multiple Just For Laughs television tapings, Jackie’s performances can be seen on JFL All Access, CTV’s The Stand Up Show, and Roast Battles Canada. Catch her live as a member of the prestigious Toronto comedy collective Laugh Sabbath.