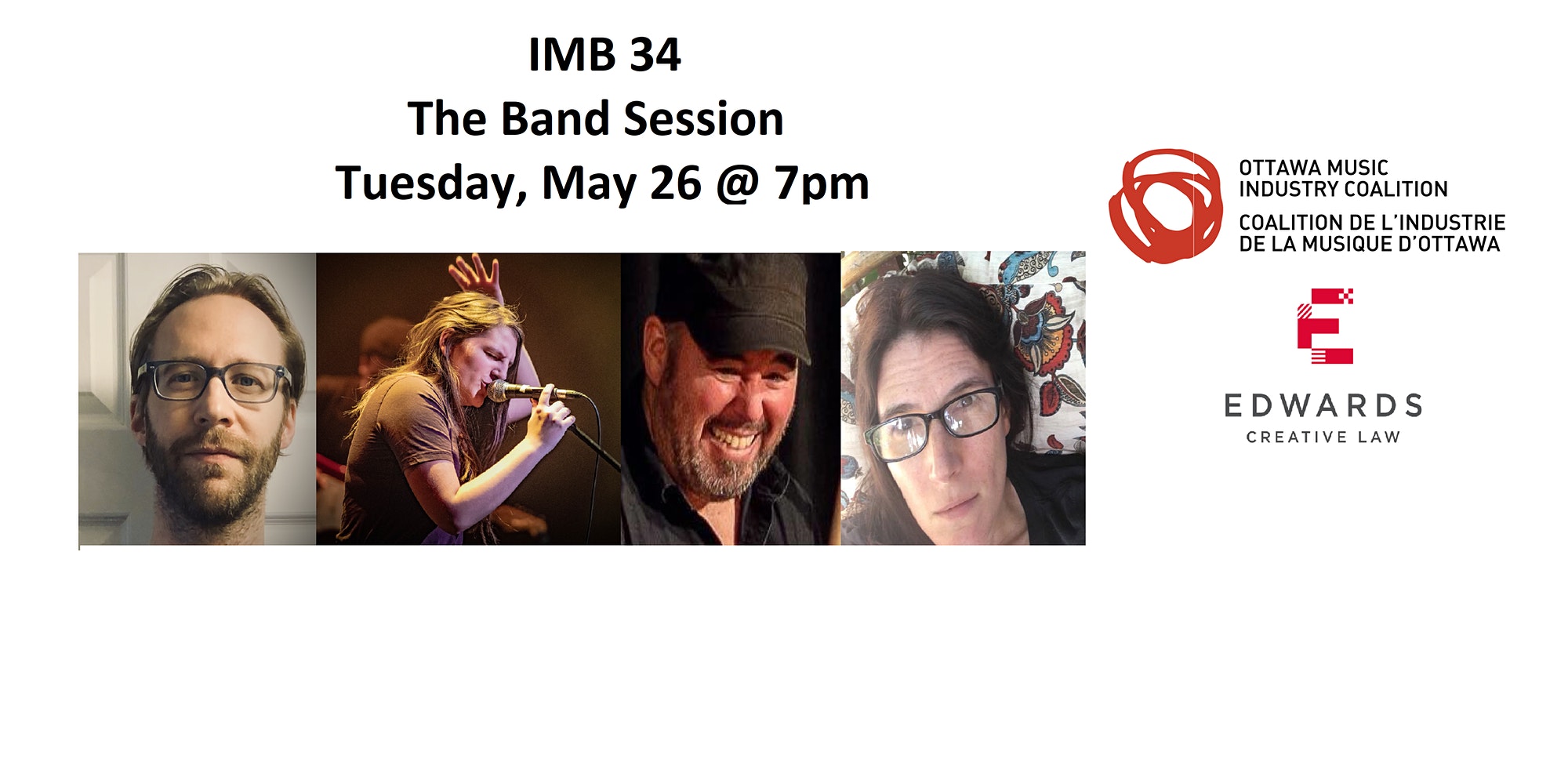 Many of the Independent Music Business sessions since 2016 have been relevant to bands but none have focused specifically on the band dynamic.

The Band Session will focus on band topics including self-management, decision making and conflict resolution strategies, and more.

The speakers are Matt Sobb from Monkey Junk and Scottie Irving from The PepTides – who are each very involved in the management of their respective music projects. The moderators are Maryn Pegan from the band Five+None and Britt Pegan who is both Maryn’s mother and her band’s co-manager. The idea here is to have an emerging Ottawa-based band ask questions from two Ottawa-based experts.

The Independent Music Business series is presented by…

Maryn Pegan is a professional rock vocalist, band coach, and frontperson of local band Five+None. Currently studying her craft at Carleton University in the Bachelor of Music program, she has been singing since the age of 8 and hasn’t stopped since. After placing third at Rebel 101.7 FM’s Real Rock Search in 2019, Five+None have been on an upwards trajectory ever since, performing on the stages of RBC Bluesfest, Kemptville Live Music Festival, Smiths Falls’ Shindig, and more. Maryn hopes to continue being actively involved in Ottawa’s music scene for years to come.

Moderator: Britt Pegan
As well as being Maryn’s very proud mum, Britt is a lactation consultant and owner of a local retail store, Milkface Nursingwear. She got involved with the management of Five+None several years ago and has since spent many, many hours navigating the challenging world of the music industry.

Scottie Irving is an Ottawa-based musician best known for his work as a member of The PepTides. Well-versed in piano, synthesizer, and accordion, Scottie is all about keyboards. He does session work for several bands and is active as a composer and sound designer for a number of theatre companies. Scottie is an alumnus of the Artist Management program at Canada’s Music Incubator and served as The PepTides’ manager for four years.

MATT SOBB has been a student of the beat for almost 30 years.
His “less-is-more” approach, dynamic power and versatility have made him a popular drummer on the Canadian music scene since 1991. Matt fell into playing drums backwards. His brother Marty had picked up guitar at a young age and had played in several bands in junior high and high school. Matt had always been a keen music fan but never took a serious interest in playing an instrument . . . until Marty’s drummer didn’t show up for a rehearsal. Matt jumped in behind the kit for that rehearsal and stayed there for the following 14 years never having previously owned a drum set or had any previous experience playing full songs with more than just casually jamming with Marty in the basement! That band, Bring Your Own Blues, evolved into Marty Sobb & The Mobb and they went on to record an EP, produce a video that was featured on MuchMusic and toured across Canada five times between 1994 and 1999.

Matt is most widely known for his work with Ottawa-based swamp/roots/bluesy rockers MonkeyJunk. And this is with good reason! Since their inception in March of 2008, they have won a collective 22 Maple Blues Awards – four of which recognize Matt as Drummer of the Year! They have also won two Canadian Independent Music Awards, a Blues Music Award in the USA and two Juno Awards for Blues Album of the Year! MonkeyJunk has toured heavily in these last 12 years. Criss-crossing Canada is what they do the most but MonkeyJunk has also toured in the USA, the Caribbean, and all over Europe. While their 5 studio releases have all been on Stony Plain Records with distribution from Warner Music Canada, this band is very much a DIY group. They have been self-managed from the start and now take care of all bookings on their own too. Matt has had a huge hand in the co-managing, co-booking and tour managing of MonkeyJunk.

Before his commitment to MonkeyJunk, Matt was a busy freelance drummer and has played live and on recordings with a who’s-who of North American blues artists as well as many of Canada’s top roots and rock artists. Matt continues to freelance with other artists in between MonkeyJunk tours and sessions. Some artists’ recent recordings that have featured Matt’s playing include Treassa Levasseur, Jeff Rogers, Drew Nelson Band, Ross Neilsen and David Gogo. With almost 30 years of live touring and recording experience including appearances at all types of venues from stadiums to festivals to concert halls to clubs, Matt is ready for anything that comes his way.

As an opportunity to be more involved in the Ottawa music scene, Matt accepted a position to book bands’ live shows at long-standing Ottawa live music venue Irene’s Pub from fall of 2009 to spring 2015. The job allowed him to increase his knowledge and experience of booking/advancing/promoting shows from the venue/promoter side of things and really added to Matt’s all-round skill set working in the music business. Since the fall of 2018, Matt has been working as the Live Events Coordinator for Overflow Brewing Company – a craft brewery and a 400-person capacity taproom/live music venue. This has built on Matt’s previous experience and has provided an even stronger and well-rounded skill set of planning and producing live music events on a bigger level.

Matt’s professional, compatible, and easy-going personality allows him to work enthusiastically and productively with many bands and artists. A solid yet tasteful approach is what he employs and what employs him! A genuine love to play music has provided him with the opportunity to enjoy many memorable musical experiences. With continued hard work and some luck, the future should prove to hold many more…