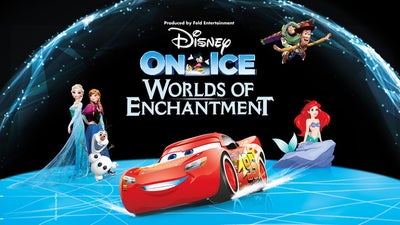 Audiences will enter the fantastical world of Arendelle with royal sisters Anna and Elsa from the Academy Award winning and number one animated feature film of all time, Disney’s Frozen. Anna, a girl with an extraordinary heart, embarks on an epic journey with the hilarious snowman Olaf and rugged mountain-man Kristoff to find her sister, the magical Elsa, whose icy powers have trapped the kingdom of Arendelle in eternal winter.

In Radiator Springs, life-size Disney and Pixar Cars characters – Lightning McQueen, Tow Mater and the crew – take their high-octane personalities to the ice. Featuring state-of-the-art, custom animatronics, their eyes and mouths move with every twist and turn on the frozen highway. Mater has amusing antics in store as the Cars characters rock the ice with jumps, spins and freewheeling fun.

Disney On Ice presents Worlds of Enchantment will perform eight shows over the course of four days, featuring an all-French performance on Sunday, March 15, at 3 p.m., from Thursday March 12 to Sunday, March 15 as follows: