Billy Talent With Rise Against 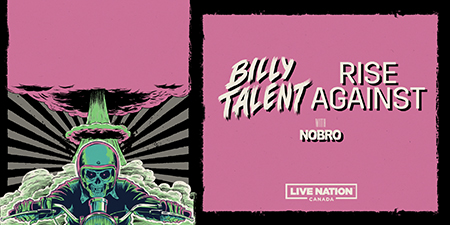 Canadian rockers Billy Talent’s cross-country tour will stop at The Arena at TD Place on April 4, 2022, at 7 pm. The band’s Ottawa stop kicks off the Ontario leg of the tour and will see the band coheadline with fellow punk rockers Rise Against. The upcoming tour will come on the heels of the release of Billy Talent’s forthcoming album CRISIS OF FAITH.

The ten-track LP was produced entirely by the band’s guitarist and main songwriter, Juno-nominated producer Ian D’Sa, in the band’s Toronto studio and was mixed by the legendary Chris Lord-Alge. The album is set for release on January 21, 2022.

NOBRO, who cut their teeth on the road with bands like FIDLAR and PUP, open the night.