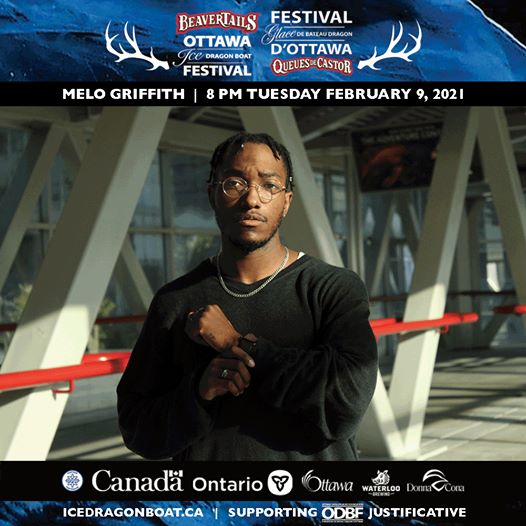 Join us for a melodious odyssey led by Carleton graduate, Melo Griffith whose musical stylings will flow in and out of many genres to generate sonic mosaics for a truly unique listening experience.

Melo Griffith is an Alternative Indie RnB Artist looking for ways to play outside the lines of standard hip-hop creativity, seeking out new taste and colour in his musical performance.
From Rap, RnB, blues all the way to soul, Melo creates intricate soundscape voicing and hypnotic lyricism. Blurring the lines between Childish Gambino and Kendrick Lamar, he shines brightly on stage and sings to your heart softly through earbuds. He continues to push the limitations on what it is to be a black artist in music, not allowing himself to be confined to just rap and hip-hop and instead explores the indie and alternative side. One of the few artists brave enough to go against the grain, finding pride in not sounding like every other Toronto artist.
Melo was born in Scarborough, raised in Ajax, Studies in Ottawa and has returned to where it all began ready to bring new life to the city!
Melo keeps his head in the clouds and heart on his sleeve when creating his best sound. Fond of music from a young age, his ability to get lost between beautiful dream tones and a heartfelt aggression towards reality is where we truly find a Vivid Imagination Being Evolved by Melo.

Audiences can tune in from the festival’s Youtube,Facebook & Instagram Channels or right here!