Good morning everyone! I hope you had a great weekend, and were able to enjoy some outdoor fun with your family, or bubble (for exercise only though, right?). We still can’t go out and about for much of anything, but hopefully that will change soon. I guess we’re waiting for Monday or Tuesday, when Mr. Ford will give us an update about when we can leave captivity. From what I’ve read though, we’re looking at having another week tacked on, but you know what? Better to have another week added now than to do it all over again in two months.

We’re at just about a year since the first “Coronavirus” case hit Canada, and we’ve been through a lot, to say the least. Speaking as a member of the events community, I can confirm that the industry has been hit pretty hard, with pretty much everything having been cancelled for the last 12 months. While we may be beginning a new year, unfortunately, COVID has followed, and the trend of event cancellations is continuing. The first major event cancellation of 2021 has been announced: the annual GlenGarry Highland Games in Maxville has been officially shut down. On February 1st, the games put out a press release with this disappointing news. You can read the full message by The Games Organizing Committee here:

I have to admit that despite my attempts at promoting events in Ottawa during the pandemic, and trying to keep spirits up, I find myself backed into a corner right now. Sadly, this week there really isn’t much to look forward to in the events world, in person or virtually. I’ve got my events calendar updated with some smaller online events that might keep you entertained, but other than the Winterlude activities, there isn’t much going on. Netflix time?

This is my random story and features section. These topics don’t necessarily have anything to do with Ottawa. It could include stories about current news issues, sports, funny videos, and/or perhaps just random things that I’ve discovered over the previous week. I hope you enjoy!

If you haven’t seen this amazing mockumentary, you are truly missing out. I saw it about a month ago, but it hasn’t made the cut in my recent blog entries due to post length. However, I can’t wait any longer to talk about it! 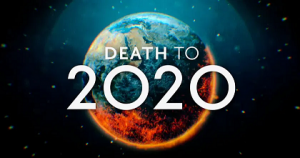 This Neflix original is not just a mockumentary, which is what I expected. It is hilarious!! It plays out in a documentary style program, reporting on all of the major events of 2020. It is cast with big Hollywood names, including Samuel L. Jackson, Hugh Grant and Lisa Kudrow, with Laurence Fishburne as the narrator. There are so many hilarious one-liners in this movie that it’ll have you in stitches throughout! 2020 was clearly one of the worst years in modern history, so what better way to respond than to make fun of it? When told we were reliving all the 2020 events, Samuel L. Jackson’s response was “why the [email protected] would you want to do that?” While the year itself was pure evil, in hindsight, it did provide some opportunities to find humour in it too. Topics included the Australian fires, the trials and tribulations of Boris Johnson, Donald Trump, Gun Control, the age of Joe Biden, Greta Thunberg, and of course, the pandemic. My favourite subject of mockery throughout was Boris Johnson. He was referred to as “the newly elected Prime Ministerial Scarecrow”, and “Prime Minister and haystack, Boris Johnson”. I was almost in tears at some of the hilarious lines throughout, and I am so amazed that the writers of this satirical documentary could transform such a depressing year into something so hilarious. Without ruining the hilarity, some of my favourite quotes were:

“Then the debate started and straightaway it was like a rap battle in a senior home. But worse.”

The explanation of the US election on election night when watching on CNN: “Basically they had this map of America that’s blue around the edges and red in the middle. And to win the election, the players have to flip the states over one by one to see if they’re a different color on the other side. They’re all worth different amounts. Like, Florida is worth 29 points even though it’s got fewer letters in its name than Tennessee. It was so confusing, they kept explaining the rules over and over.”

“I’d say it was a train wreck and a shit show, but that would be unfair to trains….and shit.”

“They had Greta Thunberg headlining. She’s this teenage girl who’d become famous even though everything she says is depressing. Kind of like Billie Eilish.”

One thing I will mention is that the film did have some sombre moments, when recalling the serious events of the Black Lives Matter movement. I appreciated that they did not try to make jokes or find humour in this dark chapter of 2020. It was approached delicately, with the reverence it deserves. 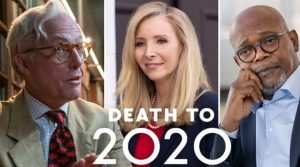 Have a look at the trailer here:

Superbowl LV (That’s 55 for you non-Romans)

Another year, another Superbowl. I don’t know about you, but I’ve been so busy (thanks mostly to the Covert Baby, and the Pandemic), that I didn’t get to watch as much football this season as I normally do, or would have liked to. However, apparently an entire NFL season just passed and Superbowl Sunday was yesterday! I watched THAT game of course though. We could have either watched Kansas City repeat, or Tom Brady win again. Oh, who to cheer for?? The Superbowl offers something for everyone, so I get to spend some time with my wife who also loves it, or at least portions of it. We start by watching the national anthem together. This year, the anthem was performed by Eric Church and Jazmine Sullivan. My wife loves the national anthem normally, it’s her favourite part of every sporting event, but this year, she wasn’t overly impressed. In fact, she describes it as one of the most underwhelming anthems at a Superbowl that she’s ever seen. Without Jazmine, she notes, it would have been brutal. I tend to agree; could they really not have found anyone better than Eric Church? I mean, in recent years, they have had powerhouse vocalists like Demi Lovato and Lady Gaga singing it. Eric Church just felt like a strange choice. After the anthem, I got to watch the first two quarters of the game, which was just a bit of a blowout. Then my wife was back again for the half time show featuring The Weeknd. Her thoughts? He has a great voice, a ton of stage presence, and boundless energy, it seems. However, The Weeknd also seemed like a strange choice to follow last year’s incredible performances by JLo and Shakira. Nonetheless, we enjoyed his performance. The final half of the game wasn’t much better than the first half. Probably one of the most lopsided and boring games I’ve seen in a while. I found myself scrolling social media and cutting my toenails for entertainment during the 4th quarter. Yay, Tom Brady won another Superbowl, and it was the Brady/Gronk show again!! Hooray!! (trying to add the sarcasm here). Don’t get me wrong, it was great seeing them do it in another team’s uniform, and they played really well, so it was well deserved. MAYBE if KC was even remotely disciplined in the first half and didn’t take stupid penalties, it would have been a bit closer. But that’s all I’ll say about the game, this isn’t a sports blog. 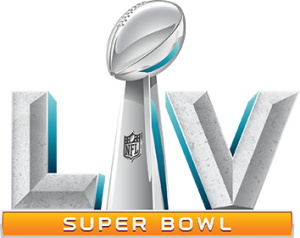 This year, like everything else, the Superbowl experience was very different. There were only 25,000 fans and 30,000 cut-outs attending the game. The cool part about the cut-outs was that people could pay $100 to have their picture at the game, sitting in a seat as one of the cut-outs! This also included an entry into a draw to win Superbowl for tickets next year. What a great deal!!

Let’s talk about commercials though. There were no special Superbowl ads by Budweiser (only Bud Light) for the first time in 37 years. The famous Clydesdales that have become a staple in Superbowl advertising entertainment were not forgotten though. Our friends at Samuel Adams picked up the reigns (see what I did there):

Also missing this year in the ad category were Coke, Pepsi, and Hyundai. There were still some pretty great ads to be seen, but as most of us watched the game on CBS (CTV) or TSN (CTV), we mostly saw local commercials with very little entertainment value.

In the spirit of the game, and to give me something else to do while watching it, I thought I’d look into some fun Superbowl facts to share for some entertainment:

2021: First time a Superbowl is held at a teams’ home field – there has never before been a true home field advantage.

2020: Advertising was at its all time highest. Two ads tied for the most expensive Superbowl ads in history (Amazon Alexa and Google Assistant) at $16.8M each.

2021: Tied into that last fact, in previous years, 17.5 million people have missed work the day after the Superbowl (may or may not have something to do with the 51.7 Million cases of beer).

2015: Superbowl XLIX (49) holds the record for most viewers with 114.4 Million viewers. (I’m curious to see what this year’s numbers were)

Now, enough with sports stuff right?? To conclude the post for this week, I’d like to go back to my previous theme and talk about happiness again! Hooray!

First, I want to share a tweet from one of my favourite accounts on Twitter. Gurdeep Pandher of Yukon is a huge source of happiness for me. He’s a Bhangra dancer (among other things) and brings me (and likely so many other people) so much joy watching him dance. He lives in the Yukon, and really enjoys embracing the brutal climate. In the tweet below, read his caption as well, but first, just watch how much fun he’s having and how happy he is. He truly is one of the happiest and most positive personalities that I’ve found online, with a smile and enjoyment of life that is incredibly contagious.

When it was -37ºC cold in the Yukon wilderness yesterday, was feeling like -47ºC with the windchill, I warmed myself with high energy Bhangra moves. Sending this joy and positivity across Canada and beyond. pic.twitter.com/mcJOOa4q8J

This is NOT actually Guns and Roses:

Another Video that I want to share this week is one that I came across on TikTok by the @AMHBAND. These guys have several musical masterpieces on their account, but this one is by far my favourite. When I first saw this, I expected the worst, but they’re surprisingly quite good!! I hope you enjoy.

That’s it for me this week, sorry for the video heavy post, but it’s funny! I hope you enjoyed the break from your day. Please subscribe on my site, and feel free to share this post!

Have a great week, stay healthy, and be kind to one another!