Happy Monday morning, everyone! I hope you had a great weekend and got the chance to play in the snow! Based on my Facebook and Instagram feeds, everyone that I know was out building snowmen in their yards. Also, I have so many pictures of the winter wonderland in Ottawa that I almost don’t need to be here to enjoy the “prettiness” of winter. Yeah, I hate winter; it is pretty but you can take it in from your living room window. I’m not a cold/snow person, it’s just not fun for me. Also, after slipping on ice and breaking my ankle two years ago (which still hasn’t healed properly, despite surgery), I’m terrified of ice. I guess my pro hockey and curling careers are done.

The lockdown is in full effect, and along with that, there are no events going on in Ottawa. There are still many virtual events that you can check out to keep busy, but since the lockdown is regional (Ontario), the selection is more limited than when the pandemic first hit. I remember back in the spring, when many well-known musicians were performing in live virtual festivals, or even just jamming for an hour in their living rooms. That isn’t the case anymore. I’ve been able to find a few concerts still going on, including daily sessions with Melissa Etheridge, Alan Doyle, Rufus Wainwright and Joe Bonamassa, but the selection is much more limited than it was previously. Sigh. For those of you with an artistic side, there are plenty of paint nights happening throughout the week. They seemed to slow down over the past few months once smaller in-person events were permitted, but now that the lockdown is in full force again, they’re back!

At least we’ve got the Sens back in action to cheer on! I guess there are 30 other teams we could cheer for too, if that’s more your taste. But let’s support Ottawa! The Sens are off to a decent start, in my opinion. Two games against the Leafs, with respectable showings in each, plus a win in their opener is a great start to the year! The powerhouse offense of the Leafs was tamed by the young Sens squad. 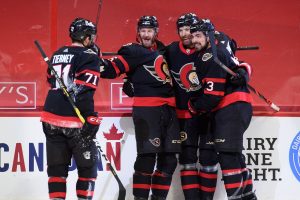 I’ve included all of the Sens games in the events calendar so that you know when to watch them on the tube. Let’s be honest, there really isn’t much more that we can do at the moment. This week, the Sens play the Jets three times, twice in Ottawa, with the third game in Winter-peg, so a later start time in the Eastern Time Zone for that one.

This is my random story and features section. These topics don’t necessarily have anything to do with Ottawa. It could include stories about current news issues, sports, funny videos, and/or perhaps just random things that I’ve discovered over the previous week. I hope you enjoy!

Calling the political situation in the US a train wreck is insulting to trains. (I stole that). It’s such a mess, but entertaining at least. I have people on my social media feed who have been all riled up for four years about US politics, and it makes me laugh each time they post another meaningless rant or meme about how awful it is having Trump as President. Honestly, what difference does it really make to us? Yeah, trade can be affected, and border control can be affected….but really, we survived, and the entertainment value has been second to none. It’s just one great big reality TV show. 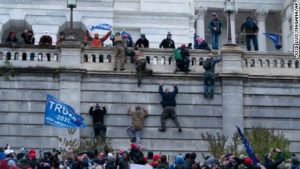 That all MIGHT come to an end this week. Joe Biden is being sworn in on Wednesday as the 46th president of the USA, so will this be the final chapter of President Trump and his imperial forces? We all saw what the mob mentality is capable of when they stormed the capital building a couple of weeks ago. Luckily, only four people died, but the damage was severe, and the devastating hit many individuals and even the country as a whole took to their reputation was significant. 25,000 national guard troops in DC, and every state capital boarding up and building mini-fortresses this past weekend is predictive of what is to come. Wednesday could be an interesting news day. So let’s sit back, pop some popcorn and watch the CNN propaganda show while we appreciate the closed borders.

Serious domestic issues are not only a US problem. Other than the pandemic, Canada has a major news issue that also resembles bad TV (like maybe Northern Exposure). This winter, in Jasper, Alberta, there  have been issues with moose licking people’s cars (que the riot scene). Moose require salt as a primary nutrient in their bodies, which they typically get from the salt lakes in Jasper National Park. But it seems that they have recently discovered that they can now lick the road salt off of people’s cars. 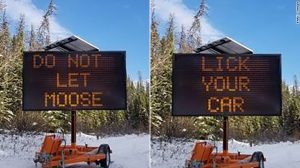 This is a big problem as people pull over on the roads to get a selfie with these massive four-legged creatures. While drivers are posing with their best duck face (because we don’t know how to do moose faces), the moose will lick the salt off of their car. Can you imagine if they had tongues like a cat? It would remove the paint instantly. Car damage aside, the problem is that they are becoming too accustomed to vehicles and people, so they aren’t afraid to be on the highways anymore. Slamming into a moose at 80km/h doesn’t leave much of your car, or potentially your life.

So come on people of Jasper, stop letting moose lick your cars!! As a side note, I guess the CNN Canada correspondent couldn’t find anything more newsworthy to justify their salary. God Bless Canada!

Now that we’re in for a full month of not leaving the house much at all, it’s time to work on some new skills. Even for those who are able to continue working, with limited activities going on and almost no interaction with others, we all have extra down time these days! Why not work on something that will greatly improve your life, or at the very least, provide you with an additional skill? Who knows, it may elevate you to a new level of success in your future endeavours! Obviously, I’m referring to the ability to open a champagne bottle with a samurai sword. 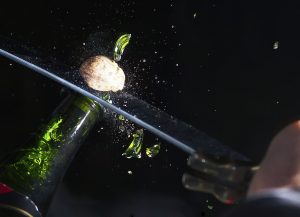 In this article, you can read through an easy 6-step process on how to master this amazing party trick. It is sure to impress your house guests to no end. Or at least once! 😊 I hope to see this on people’s resumes in the future. Good luck, and if you actually try this, I’d be interested in knowing how it goes. Please be careful.

Confirm You’re Not a Robot

Here’s my good laugh for the week. I’d like to thank my friend Bernie Franzgrote from Kreativ Insight for sharing this in the Connect Ottawa networking group. Bernie’s got a pretty great sense of humour, so when I saw this link, I knew it would be good.

Not just funny, but so friggen accurate (well most of it). How annoying are those re-captcha security requirements we’re seeing more and more often? “Choose each square that has a stop light…” Does that include the poles? I never know which to choose; some have stop lights, but the pole might be in another square, or it’s so close to the edge of the square, it might bleed over slightly, does that count?? I get this wrong every time. What about reading that mess of letters/numbers? Do you actually know the difference between a capital I and a lower-case l? Right? What if they throw in a “1” in a messy font? You’re screwed! Then, “confirm you’re not a robot” – really, can a robot NOT click a box? I’ve met some pretty intelligent robots; my living room floor can be pet hair free with no trouble at all thanks to “Roomie”, which is no easy feat in the zoo that I live in. Also, I’m sure if robots (now called AI) can rig a US election, they can figure out how to check a little box.

Have a look at this video, it’s pretty funny, and definitely worth the 2 minutes of your time. Thanks again Bernie!

Just a reminder, voting is still open for the Faces Magazine “Best of Ottawa” awards. I’m up for two awards again this year: “Ottawa’s favourite Blogger” in the Social and Digital Category, and “Ottawa’s Best Organizer/Promoter” in the Events/Entertainment Category. I’d appreciate your votes, please! You can vote daily until the end of the month. Thanks!! Vote Here: www.facesmag.ca/awards

So that’s pretty much it for me this week. There really isn’t anything going on in the events world, but I’m almost (read: definitely) enjoying writing about random crap in these posts rather than reporting on events. I hope you’re ok with that until the events industry recovers, and a happy and healthy festival season returns to Ottawa.

Have a great week, stay healthy, and be kind to one another!