As most of you know, I strive to maintain a complete and accurate list of events throughout the Ottawa area. COVID-19 has affected every industry globally, and the entertainment industry is not exempt from that list. I am striving to maintain an accurate list on my calendar, indicating which events are postponed or cancelled as quickly as possible.

Please keep in mind that I do not run these events myself, so if you are asking questions through my site or emails as to whether or not events are still a-go, I’m more than happy to help you, but I will likely have to look them up myself, so please give me time.

COVID-19 is a serious virus, and we need people to take it seriously. However, panic and hoarding are not the ways to do it. Using caution and following the Public Health guidelines are the way to do your part. As of publication time for this post, Ottawa has 3 known cases, but that’s expected to increase. Let’s all stay calm and work through this together. May I suggest that if you come in contact with someone who is infected, while you may be looking at a 14-day quarantine period, you don’t need 500 rolls of toilet paper; I don’t care what you are eating, even TacoBell. Also, please keep in mind there are people who legitimately need supplies for their daily lives such as toilet paper, sanitizer and baby wipes who are unable to purchase them when they actually need them. On a personal note, I am expecting the arrival of “Covert Ottawa Baby” in less than a month, so it would be nice to be able to purchase baby wipes to actually use as we need them! (Okay, I’m off my SOAP box now).

Believe me, I more than most people are frustrated by the fallout of this pandemic, but we all have to adapt until it passes. I personally will continue to take part in events that I would normally have gone to, as I try to keep as much normalcy in my life as is reasonably possible. As events get postponed, I will make changes to the calendar indicating this in as timely a fashion as possible. I will also add postponed events directly on this post to make it a live document.

One last thing: it’s a really big decision for an event organizer to cancel or postpone their event, so let’s be respectful when that decision is made; the last thing anyone needs in this trying time is hostility, aggressiveness or further stress.

Thanks everyone for reading, let’s get this thing fought off, and get back to reality, hopefully in time for festival season.

March 21st – How to Get to Heaven – Cancelled 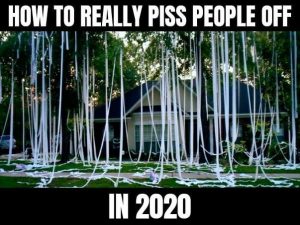