For four nights only, Suzart After Dark presents “9 to 5”, written by Patricia Resnick, at Meridian Theatres @ Centrepointe. This musical, directed by Alan Viau and produced by Cheryl Cavell is based on the movie of the same name with music and lyrics by Dolly Parton. The story takes place in 1980, when women had not yet established their place in the modern workforce, and were becoming more aware of the inequalities that they faced. Although still a topical subject today, the show is presented in a humorous fashion in despite the semi-controversial undertones. A secondary topic of this musical is the mockery of typical workplace drama such as coworker affairs, the typical drunk employee, and water-cooler gossip.

Violet, played by Tara St. Pierre, leads the charge to take down the evil, male chauvinistic pig of a CEO that they all work under and despise. With support from Doralee and Judy (Kelly Fontaine-Fuoco, and Julie Seguin respectively), she devises a plan to improve working conditions for all employees through the creation of workplace benefits and alternate work arrangements. 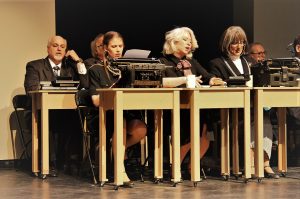 This play is very funny with continuous one-liners, tongue in cheek humour, and sexual innuendo. Each of the main cast members play their roles appropriately in that context. Costumes, designed by Tracy Byers-Reid, and props, designed by Trish Williams, were excellent in this show and included retro typewriters set up on the desks, and fabulous 70’s/80’s attire. The make-up and hair is also excellent and really helps to portray the personalities of each character; it really emphasizes their unique features, and is remarkably appropriate for the period. I particularly enjoyed the makeup and costuming for Margaret (played by Nancy Poirier) with her drunken smeared lipstick, and Doralee, with an over-the-top look that you might expect to find on a Southern American in the late 70’s/early 80’s. 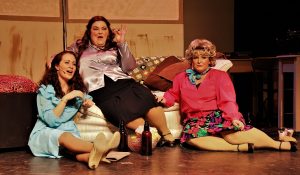 The set was very versatile, and is definitely an indication of improving functionality with Suzart productions. The set changes were seamless and well orchestrated for the most part. There were a few glitches in the actual conduct of changing sets, but for a dress rehearsal, these can be easily overlooked, as they should be ironed out for opening night. Kudos to Elaine McCausland for the design of the set. 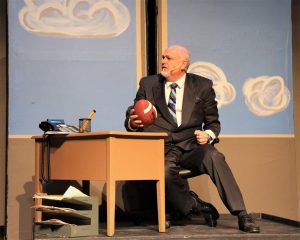 The music was incredible with a full band in situ at the side of the stage. I always love it when you can see the orchestra members playing alongside the cast. The music was directed by Misty Banyard-Kelley, and was as good as any live show that I have seen, professional or community. The sound and lighting were also excellent and spot-on. If you are a reader of my other reviews, you may recall that I found Suzart to have had some lighting and sound issues in the past, but they seem to have been corrected for this show! Very impressive!

Violet: Tara St. Pierre really shone in this role! You cannot help but root for this hardworking woman, who gives her all to her job, reaping no benefits and being overlooked for promotions. St. Pierre has a great voice, and nailed the choreography, but what really stood out to me about her performance was her commitment to the role itself. She gives an empowering speech towards the end of the show, which gave me goosebumps. I really enjoyed her performance! I’ve seen St. Pierre in multiple shows, and I was a little disappointed this time that her role didn’t allow her to show off her incredible voice as much as her previous roles have allowed. 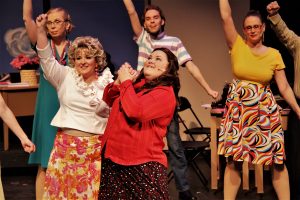 Judy: Julie Seguin was an absolute treat in this role! I previously reviewed her performance in Falsetto’s, with Orpheus, and was blown away by her performance there (you can read that review here). And she once again rose to the challenge and ‘killed’ it as the character of Judy! She has a beautiful voice, (one of the best in the Ottawa theatre scene, in my opinion!) and endless charisma on stage. The character of Judy was my favourite prior to seeing this performance, I just find her to be so funny, and I was not disappointed with Seguin’s portrayal! Listen for her solo close to the end of the second act…it was a show-stopping number! 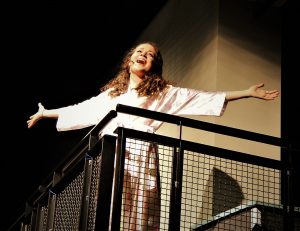 Doralee: I loved Kelly Fontaine-Fuoco’s portrayal of this Southern belle with a feisty personality! It takes a talented actor to take on a character like this….everything about Doralee is over the top…and Fontaine-Fuoco really brought her A-game! She was funny, charming, and sassy, and embodied everything that makes the character of Doralee so lovable! She also has a great voice, I particularly enjoyed her performance of “Backwoods Barbie.”

Franklin Hart: Stephen Beneteau was INCREDIBLE in this role. I have always believed that the very best actors are capable of making you despise unlikeable characters, and this was certainly the case here! Beneteau was so good at portraying the awful Hart, and his comedic expressions and timing were fantastic. Amazing acting abilities aside, Beneteau also has a rich, smooth tone to his voice which made his songs really enjoyable to listen to. I hope to see him in Suzart productions to come! 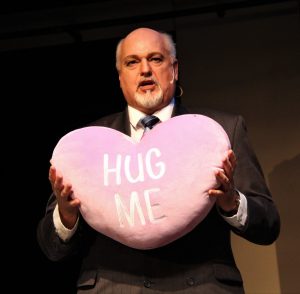 Occasionally when I review a show, there are one or two non-lead characters who draw my attention; sometimes due to stage presence, facial expressions, or strong dance abilities. In this show, I have to give kudos to Emmett Workman (pulling double duty, portraying the characters of Josh and Joe), Nancy Poirier (Margaret) and Cynthia Wood (Roz). Workman flawlessly transitioned from teenager to junior accountant, committing to both characters and achieving believability. I really enjoyed his performance. Poirier was hilarious as Margaret. There are a number of really funny one-liners that she really delivers very well, but mostly her facial expressions and her movements are what made her such a standout for me! Wood was just incredible with her portrayal of her character, she was always entertaining, and is a natural. Kudos to all three on a job well done! 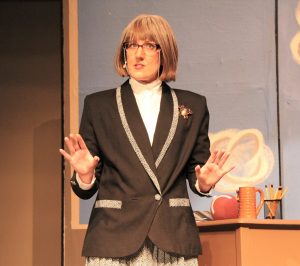 This play takes place in the smaller theatre at Meridian Theatres, but once again is perfect for the performance. This intimate area allows the audience to feel right in the show, and they get to see the excellence in props, costumes, make-up, and set design up close and in person. These details are often missed in larger venues. 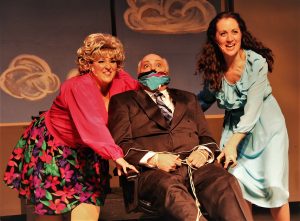 Overall, I really liked the show! It’s just all-round great fun. The main cast members worked really well together, creating a truly enjoyable experience! The music was excellent, and the story was fun to follow. The downside is that there are only four performances scheduled, Wednesday through Saturday nights this week at 7:30pm. As of Tuesday night, tickets were already almost sold out, so get yours quickly! 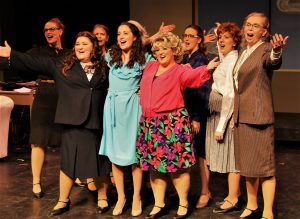