The Great Canadian Theatre Company’s 2019-20 season is scheduled to be more diverse than ever, with plays covering social and political commentaries across the spectrum. Thursday night I had the privilege of seeing ‘Cottagers and Indians’ on its opening night.  It was a packed house, with only a few single seats remaining in the back rows.  This theatre is an absolute gem.  In the gorgeous Hintonburg district of Ottawa, a hop-skip-and-jump from great restaurants and coffee shops so you can make a true evening of your theatre adventure.  The theatre itself has a large reception area, with a bar, ticket office and coat check.  You don’t feel crowded waiting to take your seat and the atmosphere is very laid-back.  There are many volunteers who have contributed tireless hours to ensuring the success of each performance night, by acting as ushers, ticket-takers and coat check receptionists.  Your evening starts off on an inspired tone, seeing how the Ottawa Arts community comes together to support local theatre. 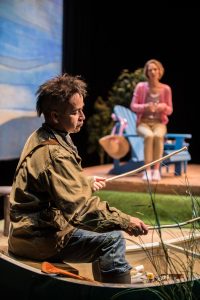 Cottagers and Indians is written by the well-known Canadian Indigenous playwright Drew Hayden Taylor.  This run of the play is directed by Eric Coates, a force to be reckoned with in the Canadian theatre community.  The two characters in this narrative are played by Herbie Barnes, as Arthur Copper, an Indigenous wild rice farmer, and Philippa Domville, as Maureen Poole, a Muskoka cottager.  This tale depicts a clash of cultures and values, with raw emotion that is eviscerating and real.  In a direct and brief synopsis of the play, without spoiling it, Arthur, in an attempt to reclaim a lost part of his Indigenous heritage through the goal of achieving ‘food sovereignty’, has been growing and harvesting wild rice (or manooman) throughout several lakes in cottage country.  This action has caused direct conflict with the cottagers, represented by Maureen, as the manooman is an aesthetic stain on their previously pristine lake, and prevents them from fully participating in cottage life.  The wild rice conflict is intertwined with each character’s personal story and sentiments, while culminating in a shocking narrative. 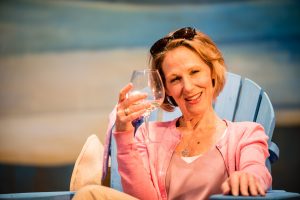 Before I could objectively review this play, I had to take a step back and analyze my own emotions and where they came from.  Many previous reviews for this play highlight the balanced nature of the argument between the two opposing sides – emphasizing that the playwright, Taylor, despite his personal connection to the Indigenous community, was very generous in not taking sides.  I really didn’t get that from the scripted dialogue, nor the character portrayal.  Both the Arthur and Maureen characters were taken to extremes.  The play was rife with Indigenous and Caucasian stereotypes and inuendo, that depending on how and when you grew up, forced you to side with one of the characters.  To speak to Philippa Domville’s incredible acting prowess, she truly made me hate her character to the core.  I was on the edge of my seat, in anger, shuddering at every inaccurate and racist comment that she spewed from her wretched and privileged mouth.  I couldn’t see past her vile narrative to recognize how much the cottage and lake meant to her on a sentimental level.  That visceral reaction is definitely a reflection of my personal, political and social values. I felt compelled to stand-up and join Arthur Copper in his fight to maintain his Indigenous rights.  Now, that’s not to say I was 100% pleased with the portrayal of Arthur Copper.  His character was also a culmination of negative, racial stereotypes.  I cringed when comedic value was gained at his expense through jokes, jabs and name-calling that were direct attacks on his Indigenous heritage.  While, in my opinion, his argument for continuing to farm wild rice was solid on both a social and ecological level, his character fumbled when the dialogue didn’t reflect as much anger and resentment towards the cottagers as I, perhaps, thought it should have. While it is billed as a comedy, I, personally, couldn’t get past the racial narrative and social commentary to see the lighter side of the play. 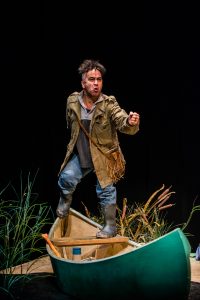 After the play, I couldn’t help but look around the audience and reflect on the fact that most people watching this dramatization were white, and most definitely privileged, myself included. Perhaps this is a reflection of our openness and willingness to understand both sides of an issue through art?  Or perhaps it’s just a reflection of the demographic that can afford to value and support the arts?  It does stop to make you think.  How you feel leaving this play will be a direct reflection of your personal values, and I fully encourage you to go and see it to test your boundaries. 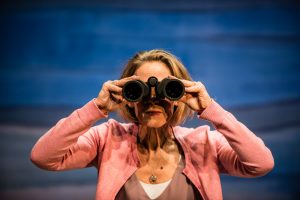 The GCTC will be host to this play daily until December 15th with matinees on the weekend. Tickets are still available through the GCTC website!