Bitch, bitch, bitch, funny, funny, funny…..was how Falsettos starts off setting the tone for a unique and entertaining musical, as the latest Orpheus show hit the stage Wednesday at the Gladstone Theatre. Falsettos, Orpheus’ first of four shows this year, kicks off theatre season on a strong note. It’s an interesting story set in the late 1960s/early 1970s about a dysfunctional Jewish family situation between a man, his ex-wife (who’s in a relationship with his psychiatrist), his male lover, and the divorced couple’s child who’s caught in the middle of the drama. 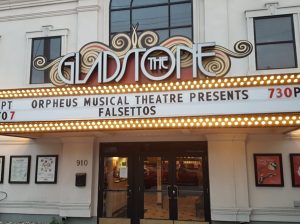 Although I have previously reviewed the Gladstone Theatre, I’d like to begin this year’s theatre season with another few comments about the facility. My reviews typically are from the perspective of the patron, or audience member so that you as the reader can understand what the show is like as an experience, and a complete night out, not just the quality of the show itself. The Gladstone Theatre is a delightful venue, right off of Preston Street in the heart of Little Italy. It is a very simple building: the box office is in the foyer immediately when you enter, and the coat check, bar and bathrooms are all in the small lobby just past that; the mid-sized theatre makes up the remainder of the building. At The Gladstone, they don’t waste time creating a one-venue-for-all-events feel, they have found their niche and focus on what they do well….theatre. The audio/video equipment is very high quality, as are the lighting and other technical features of this venue. It is designed to be an accommodating to many types of shows, boasting a versatile stage area, while still creating a simple and intimate space for the audience to really feel as though they are a part of the shows. The drink selection at the bar is excellent and features a large selection of local craft beer, along with wine and mixed drinks. Don, the bartender, is always happy to say ‘hi’ and is very friendly with anyone who wants to chat with him. Although I love The Gladstone, there are two very significant downfalls to it. First, is that there is no parking at all. You have to search around on  nearby streets,  many of which also have no parking, or go to a city paid lot a few blocks away. It’s a bit of a challenge and a good walk from where you can find parking. A friend at the show last night suggested to go across to Vimy Brewing Company, have a pre-show drink and then park there for the night. Not a bad suggestion! The other downfall to The Gladstone is that their lobby is quite small and prior to the show starting, during the intermission and right after the show, it gets very full, to the point where you are bumping into people. There isn’t really much to be done about this, it’s just an observation. Otherwise, it’s a great venue that hosts many great shows! Now, on to the review of the show. 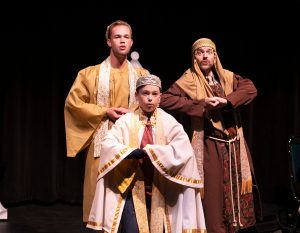 Orpheus is known for their high quality sets, props and costumes, and with Falsettos, they once again did not disappoint. Although not as elaborate as many of their sets, what they had was incredibly diverse and offered efficient and effective set changes for each scene. The props were minimal, but once again, appropriate for the show. Including intermission, this performance was two hours and forty minutes, so quite a lengthy production. The first half was quite funny, with plenty of tongue in cheek humour, lots of energy and entertaining moments. The second half had a more serious and sophisticated tone. I found it to be a little bit slow at times, and I found myself checking the time and reading the program to see how much was left. It’s not that there was really anything wrong with the show, it was just about twenty minutes too long in my opinion. I think it also may have just felt long given the fact that the first half was SO funny and energetic, and the second half slowed so much, that it felt long and drawn out in comparison. The music was provided by a small band to one side of the stage. This four- piece band was excellent, and I always think it’s great to be able to watch the musicians play on stage in a musical performance. As mentioned, the technical side of the musical was spot on, with none of the distracting audio problems that are sometimes found in community theatre productions. 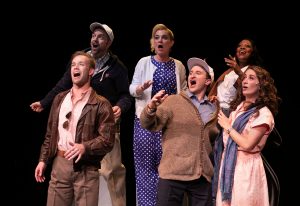 Sometimes in a show, especially the ones with small casts, I struggle in singling out the Standout Performances. They still exist, it’s just that I don’t want any of the other actors to feel as though their performances were not also incredible. Such is the case with Falsettos. Trust me when I say that each and every member of this cast is unbelievably talented! I enjoyed everyone’s performances; I do not have a negative thing to say about any of them. But the following actors REALLY blew me away. 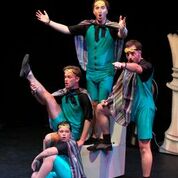 I did not expect to love this character as much as I did, and I think that can be attributed to Moscoe’s incredible portrayal of the quirky psychiatrist. One thing about Moscoe that stood out to me in particular was his vocals. I did not hear a wrong note the entire show, and his harmonies when singing with other cast were flawless. His voice is smooth and controlled, and throughout the show, the audience gets to hear the dimension in it as he tackles different styles of song. To me, he sounds as though he has a lot of vocal training under his belt, and it made him a treat to listen to! Aside from that, he was funny and strangely charming, and I loved everything about his performance.

WOW! Seguin, too, impressed both myself and the rest of the audience with flawless vocals. There is a very clear quality to her voice, and despite some of the songs being quite fast-paced, she performed them with ease. She portrayed this character perfectly, and I cannot imagine a better casting decision than her in this role. I appreciated the breadth that she brought to the character of Trina; this character really goes through every emotion possible in this show, and each one was accomplished beautifully. The highlight of the entire performance for me was her song, “I’m Breaking Down.” Not only is the song itself hilarious, but the way she performed it was so over the top that I was near tears! This might go down in the books as my favourite individual song performance in a musical ever. 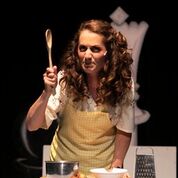 Dunn was such a pleasant surprise in this musical! Despite the mature content in the show, and being surrounded by some very talented, highly experienced adult actors, young Dunn not only held his own, but stole the show in more than one scene. His comedic timing is perfect, his voice is sweet, and his dancing is epic! He handled some very difficult emotional scenes with ease, and was very believable/loveable in this role. I was thrilled to read in the program that he will be playing the role of Bruce Bogtrotter in Orpheus’ upcoming Matilda, because that is a favourite character of mine, and given the level of talent that I witnessed last night at Falsetto’s, I know that Dunn is up for the task. Kudos, Dunn, on a job exceptionally well done; I look forward to cheering you on as Bruce! 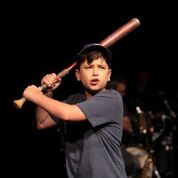 As I mentioned before, each and every one of the actors in this show were phenomenal. A superb cast, with so much talent. Very impressive, all around!

Overall, this musical is very good, and certainly lives up to quality standard that I have come to appreciate from Orpheus! Although not my favourite of Orpheus’ shows, it was still really enjoyable, thanks to the incredible skills of the cast, the quality of the props and set, and the seamless technical aspects that make a successful performance. Falsettos is only on for a short time, running up until Saturday night, so you don’t have much time to get out and see it. I highly recommend that you do!

One thought on “Ottawa Event Review: Falsettos by Orpheus”