CityFolk organizers set to stage MARVEST 2019 in ‘the Glebe’ 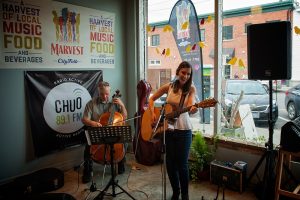 Marvest celebrates the bounty of talent that has taken root and flourished in Ottawa and throughout Ontario and Quebec, offering an eclectic lineup of musical entertainment in a wide array of venues. It’s about bringing friends and neighbours together in the name of great music and honouring the abundance that characterizes a fall harvest. Marvest will showcase the many talented musicians who have made Ottawa’s music scene so vibrant.

Inspired by the city-wide explosion of music during Austin’s SXSW Festival, the sights and sounds of Marvest will spill out of more than two dozen venues along Bank Street. Throughout the event, over 70 acts will play a series of free music concerts in bars, restaurants and storefronts along Bank Street, allowing the ‘party’ to carry on into the night.

New this year, Marvest will provide a free shuttle for festival goers. Dubbed the ‘Magic Marvest Bus’ and operated by Lady Dive Tours, the shuttle will run up and down Bank Street during Marvest. There will even be live music onboard throughout the festival! For shuttle route information and hours of operation, please visit the CityFolk website.

The overall event forges connections between artists, businesses, community associations, and a diverse group of music fans from Ottawa and beyond. Marvest will work in partnership with the Glebe BIA and the numerous local businesses who have offered to open their doors to some first-rate music.

“This is a great opportunity for the CityFolk organization to promote the Ottawa music scene by working in cooperation with local businesses,” says CityFolk executive director Mark Monahan. “It gives the musicians a boost by helping them develop their audiences . . . and it helps businesses broaden their customer base.”

Marvest will take place Friday, September 13 and Saturday, September 14. Check out the CityFolk website < www.cityfolkfestival.com > to find out who’s playing where.