I’m going to make a really bold statement: Avenue Q is the funniest musical that I have ever seen! Brought to the Gladstone Theatre stage for two weeks by Toto Too, this show is not to be missed! I have seen other TotoToo shows, and I have to admit that they have all been pretty spectacular, but Avenue Q, in particular, has raised the bar yet again for community theatre! If you don’t like reading super positive reviews, you might as well stop reading here, because each and every element of this show was amazing for me!

The story follows Princeton, a young man fresh out of college, ready to tackle adult life and the job market, who finds himself living on Avenue Q, along with an eclectic group of individuals. This group includes furry monsters and humans alike (including Gary Coleman!) and the antics that ensue are absolutely hysterical! 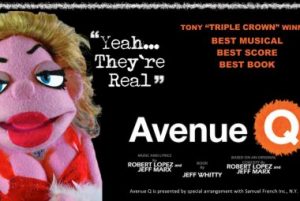 Princeton (Yang Chen) meets a sweet monster girl (Kate Monster, played by Maya Desrosiers), and sets out to find his life purpose. This brings me to my first two standout performances. Chen was SO good in the role of Princeton, but it’s his vocals that seemed to win over the audience. Chen’s voice is akin to that of a pop singer, and he wows during songs like, “What Do You Do With A B.A in English?” and “Fantasies Come True.” And the way he portrays the character itself makes Princeton extremely likeable, despite making some questionable choices during the show. Chen was really a great fit for this role.

Perhaps even more perfectly cast was Desrosiers as Kate Monster. Her vocals were perfection, and her animated facial expressions that accompanied her puppet were incredibly entertaining! I previously saw her in Shrek (see the review here) this past spring, and here she proves once again that she is a triple threat performer. She lights up the stage in every scene that she is in, and made Kate Monster the most loveable character in the show for me. Desrosiers, amongst an incredibly talented cast, stole the show. 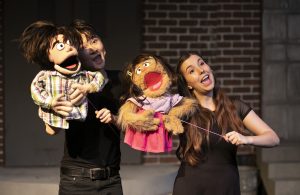 Speaking of stealing the show, another standout performance came from Nicole Tishler in the roles of Lucy the Slut and Mrs.Thistletwat. Tishler is SO TALENTED! She did different voices for each character, and although she was using puppets, she used so much movement and facial expression to bring these two hilarious characters to life! She had the audience in stitches. I was very impressed with her performance!

Adrien Pyke as the character Rod and Ryan Melvaer as Nicky stole the audience’s hearts as well. These two besties, living together while pondering one another’s sexual orientation, were as funny as they were charming, and Melvaer’s voice for the role of Nicky was particularly fantastic. There were so many great moments for these two, and I enjoyed every moment that they were on stage!

Tama Knight had me in tears in the role of Christmas Eve. I cannot imagine anyone else in this role, she was so perfect! Her comedic timing was flawless, and she was an audience favourite, without a doubt! I wish that her bio had indicated what show is up next for her, because I suspect she is equally fantastic in everything she does. Her on-stage husband, Brian, portrayed by Euan Wheaton, was very witty, and I loved seeing their relationship develop as the story unfolded.

Also hilarious: Itzy Kamil as Trekkie Monster. His performance during “The Internet is For Porn,” had the audience roaring. Kamil, like Melvaer, had a perfect character voice for Trekkie, which made his lines all the better. I can’t imagine being able to maintain those types of vocal sounds for an entire show, but Kamil did it! I read in his bio that you can usually find him eating at the best Greek restaurant in town, Cozmos Souvlaki, which makes me like him even more! (I featured Cozmos awhile back on my website!) He really did a great job in this show!

The role of Gary Coleman was played by Tiffani Kenny, who has an innate stage presence and a knack for comedy. She portrayed Coleman exceptionally well, and really did justice to an iconic, loveable character, which cannot be easy!

Now, I have to mention the Bad Idea Bears. Portrayed by Ainslie Moors and Brandon Nguyen, these two were one of the best elements of the show for me. I found myself describing them later to my fiancé, and erupted in laughter all over again. I loved their voices, their facial expressions, everything! These two really worked as a pair, and were hugely entertaining! I wish that they had a bigger role, because I really enjoyed them! 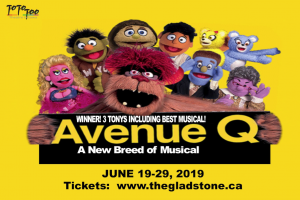 Talent of the actors aside, the music for this show is phenomenal. It is an award-winning score, and the live orchestra accompanied the actors beautifully. I didn’t hear a single wrong note or missed cue. There was the odd glitch with a mic, but that can happen in any show, and didn’t take away from the experience at all.

The set design was simple, and was used very well! It didn’t overpower the stage, but set the perfect backdrop for the action on the stage. The choreography was really cute, and was at a level where all of the actors were able to perform it with ease. I love that!

All in all, this show was incredible. If it is any indication of the quality, the entire audience was on their feet in a standing ovation before the cast had finished singing their final song. I would HIGHLY recommend seeing Avenue Q if you get the opportunity. While the content isn’t really family friendly, it’s a great show to catch if you really need a good laugh and an entertaining show! I will most certainly be seeing it again before it’s run ends on June 29th!