Ottawa Event Review: Priscilla Queen of the Desert by Orpheus

Orpheus Musical Theatre Society has done it again!! Priscilla Queen of the Desert opened this week at Meridian Theatres at Centrepointe, and once again, Orpheus has cut no corners in creating a top quality production. The casting was excellent, the costumes and make up were perfect, and the set design and originality of the props was second to none. Each Orpheus production that I attend blows me away and Priscilla is no different. Although the concept is a little more risqué than most of their shows, the audience loved it, with a sustained five-minute standing ovation at the end. 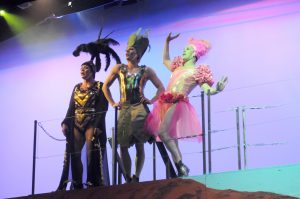 The storyline consists of a trio of drag queens making their way across Australia to re-connect with one of their wives and child, who he’ll be meeting for the first time. The story focuses on their hilarious antics and the variety of people that they encounter in the small towns of the Australian outback. There are many funny scenes and the overall feeling of this performance is lighthearted, despite the characters having to deal with the stigma that unfortunately sometimes still accompanies the LGBTQ community. With a large amount of tongue-in-cheek humour, it’s a fun and feel-good production that leaves the audience full of enjoyment and anticipation for what’s to come. 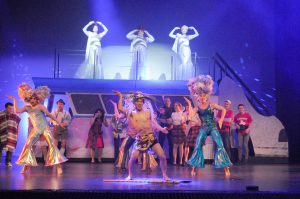 There were SO many standout performances for this show that I am forced to do something a little bit different for this review; if I were to go into detail on each standout performance, this would be pages long. Truly, every single member of the cast was INCREDIBLE. I don’t say this to be kind, it is just the reality. It didn’t matter where you looked on the stage, each performer brought their A-game, and it was magical. From the leads to the ensemble, everyone on the stage blew my mind. So, instead of listing the top 4 or 5 performers, I will just mention one, Tick, played by Andy Allen-McCarthy, whose performance really moved me (and the rest of the audience, it appeared!), and then I will focus on the Standout Performances from behind the scenes: the choreography, the costumes, and the set design.

I think what was most impressive about the performance of Andy Allen-McCarthy as Tick was the depth and emotion that he brought to the character. McCarthy proves from the first scene that he has the acting and vocal chops to portray this character and carry a show, but as it progresses, the audience experiences, through his character, a huge variety of emotions. I felt his fear, his joy, his sadness…it was a moving performance on so many levels! I should also mention his incredible stage presence and dance skills; there was one scene in the second act where McCarthy’s antics and dancing had me laughing hysterically! McCarthy really stole the show. 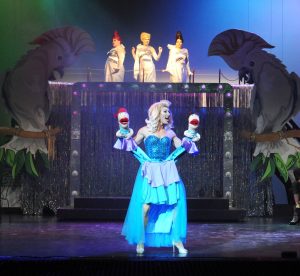 Choreography receives my next Standout Performance! Choreographed by the infinitely talented Morgan Coughlin, I have to say that this was the BEST choreography that I have seen in an Orpheus show, ever. Now, given how much I loved the choreo in Mamma Mia, this is really saying something. It was creative, it was fun, it was energetic, and it was unique; in particular, I loved the dancing for the funeral scene, Go West, and Thank God I’m a Country Boy. But every single routine was impressive. I have mentioned before that what makes a choreographer great in my eyes is one who tailors his or her choreography to the abilities of the cast; there is nothing worse than watching a show where a cast is struggling to keep up with the movement. And Coughlin NAILED it. The cast was able to perform every dance flawlessly! The dancing in Priscilla is what made the show so incredible for me!

Next up for Standout Performances is the costuming! I don’t want to give too much away here, because each scene brought so many fantastic costumes, and the audience loved it! There was a lot of “oohing and ahhing” when a new, even more spectacular costume than the last came out! I cannot imagine the amount of work that went into creating these masterpieces, as they are truly works of art. Kudos to the costume team on a job exceptionally well done! 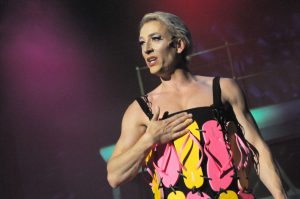 Finally, my last Standout Performance goes to the team responsible for the set design. Jenn Donnelly and Steve Jones were co-designers, and really raised the bar on what one can expect to see at the theatre! The term ‘creative geniuses’ comes to mind. Their work is something I would expect to see on Broadway, just amazing in every way. I am really looking forward to seeing Donnelly’s work on Matilda in the fall!

This review would be amiss if it did not mention the orchestra! They were so flawless that I kept forgetting that it was live music, they sounded like a perfect recording! Clearly a very talented group of individuals! I think it would be safe to say, without exaggeration, that the orchestra for Priscilla is the best that I have heard in live theatre.

Other highlights of the show include some impressive looks designed by Hair and Makeup designer Kim Shields, the creative use of props by the props team (watch for the ping pong ball scene!) and a very adorable performance from Declan Cassidy as Benji, capping off a truly remarkable show. 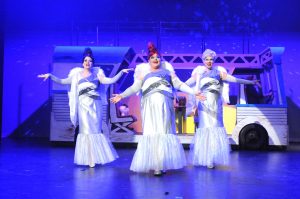 Priscilla is on until June 9th with shows each night (except June 3rd) and a matinee on Sunday the 9th. The house was about 95% full on opening night, so I’m sure you can expect limited ticket availability as the show progresses and word gets out. It really is a lot of fun; I recommend you go see it before it’s too late. Ticket prices are $27 – $57 each, so well worth the price for a great night out.

2 thoughts on “Ottawa Event Review: Priscilla Queen of the Desert by Orpheus”