After two years of increasingly frequent theatre reviews, I’ve developed a love for liver performances. This year’s Fringe Festival looks amazing, and I’ve really taken the time to look into the schedule! How have I been missing out on this for so long!!! It looks fantastic with way to many shows to list. I will be out to as many as possible to provide reviews, but you really should check this out too….prices are dirt cheap, and from what I can see, the quality is incredible!! You can see the full schedule by clicking here! 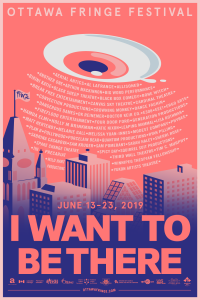 YOU’LL WANT TO BE AT THE 2019 OTTAWA FRINGE FESTIVAL

May 8 2019 — The Ottawa Fringe Festival launches the complete online listing of 2019 shows this Friday, May 10th! Running June 13-23, the Festival will celebrate another year of wonderful and weird indie theatre. With 343 performances of 54 shows in 9 venues – including Arts Court, the University of Ottawa,and even a church! – you’ll definitely want to be there. The full line-up and schedule can be found at ottawafringe.com/shows .

This year’s programming includes performances of every genre, featuring artists from around the world: clown from London, storytelling from Finchampstead, dance from Toronto, and even a strip-tease from Portland; you never know what you’re going to get at the Fringe!

Catch sight of the comfiest 91lb set, entirely made out of yarn, in The Knitting Pilgrim (Toronto, ON); talk to Montana Adams about the border politics of Akwesasne, a reserve sitting on the corners of Ontario, Quebec and New York in My Good Friend Jay (Ottawa, ON); enjoy a hilarious-blockbuster-broadway-worthy production of Fuckboys: the Musical (Orlando, USA); travel the world from Berlin to NYC in the modern dance exploration of women around the globe in Worldy Women (Toronto, ON); or take an acting lesson with the ego-driven Niklaus in ARNOTT: a Masterclass in Good Theatring (Ottawa, ON). This is merely a snippet of what to expect at the Fringe.

Last, but certainly not least, the latest news on our outdoor Fringe Courtyard! Bouncing around from location to location each year, we are proud to announce a permanent home! Located in the newly renovated SAW Courtyard at 67 Nicholas St., serving up Dominion City beer and Top Shelf cocktails. This year, the Fringe will be highlighting our free programming series, making the festival accessible for all. Taking place in the Fringe Courtyard, we are excited to present Lauren & Amanda Do It, Ottawa Fringe’s award-winning talk show; Fringe Rising: Youth Showcase , performances from Ottawa’s up top up-in-coming artists hosted by award winning poet-laureate Jamaal Jackson-Rogers; (un)told: In the Spotlight, performers share stories of their best and worst times on stage, presented by Ottawa Storytellers. Fringe will be bringing back favourites like Sunday Morning Yoga, Ottawa Arts Gallery tours, and new events like live canvas painting! The full list of free programming will be released on May 10th at ottawafringe.com/events .