Tuesday night, I attended the preview of Thief Society presented by Under the Table Ensemble Theatre and Black Sheep Theatre. This latest play at the Gladstone Theatre is, simply put the funniest play I’ve ever seen live. While I have loved many shows, and may have commented in past reviews that some were “the funniest ever,” Thief Society takes comedy to a whole new level. My review for Lysistrata from two weeks ago mentioned that it was one of the funniest I had ever seen, and while it certainly was, Thief Society is an entirely different type of humour, falling into the slapstick comedy category without being over the top stupid; It’s just perfect. 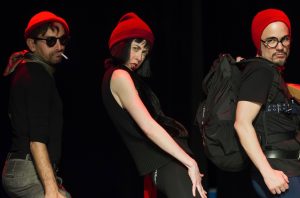 Although only 65 (ish) minutes, it holds your attention the entire time, without one minute spent without a silly grin on your face, or finding yourself nearly in tears of laughter. There are only three performers in the play, and each one of them is outstanding and perfectly cast. The soundtrack is exceptional, and the use of props and costumes, while themselves incredibly simplistic, are second to none.  Although I enjoyed every minute of the show, it’s a challenge to write this review without giving something away; each and every scene has a joke and something that should not be spoiled!

The basic storyline follows a team of thieves trying to earn their way into the ‘Thief Society,’ and to be awarded a pin signifying their acceptance. In order to do so, they must successfully complete a specific heist, where they steal a piece of art called “Goat on the Wind”. The story has a few flashbacks that jump to the planning stages of the heist, but the bulk of the story is set during the heist itself. This team of three consists of the leader (Gretchen), the skill (Arnauld) and the Equipment manager (Hans)….although he goes by other titles and names throughout the story. 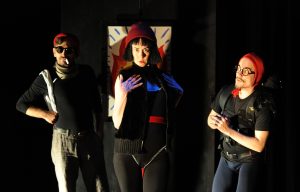 I want to mention the props right away. They are the most simplistic set of props that I’ve ever encountered in theatre, community or professional, but they are used so well! Some critics may say that they are low budget, (I’m sure they are), but their questionable quality only adds to the hilarity of the show! The props alone could earn my ‘standout performance’ commendation, as they are equally creative as they are simple. They are used brilliantly and are very, very clever. At the end of the show, there was a gentleman sitting beside me who commented in a joking manner “I love the use of high-tech props” as he cleaned off foam stuffing from his lap from the fire extinguisher.

There is no live music for this play, as it’s not a musical, but the song choices and sound effects were flawless. Each chosen song worked impeccably with the scene it was used in, and the sound effect timing was spot-on! It’s two hours after the show now and I’ve still got “Whatever you like” by T.I. stuck in my head! 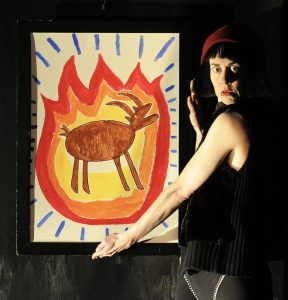 I won’t do my usual “stand out performances” as there are only three people in this play and all three portray their character perfectly. Sarah Petersiel, who plays Gretchen is outstanding. Her eyes bring a whole new appreciation for the term “crazy eyes” (OITNB reference). Her facial expressions are brilliant and create the perfect crazy character to lead this team of misfit thieves. Arnauld, played by Josh Matthews is equally brilliant. He genuinely pulls off the Parisian accent and hits the cultural French stereotypes perfectly in his role of French master thief. His comedic timing and interaction with the other two characters is second to none. Hans, played by Matt Chapman portrays the role of a bumbling idiot intern-type who just doesn’t seem to be good at anything, and is subjected to “feedback sessions” on multiple occasions. In the opening scene, even before a word is spoken, Chapman has the audience in stitches with his antics, effectively setting a tone of hilarity for the entire show. All three of these performers work with Under the Table Theatre, and it’s obvious that they’ve worked together many times; none of them miss a beat with their comedic timing and play off each other as seasoned professionals. 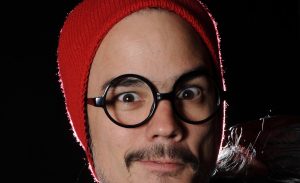 I can’t go into any further details without ruining the jokes, and trust me, there are so many things I’d love to put into this review. This is a must-see performance for anyone. It’s so ridiculously hilarious that you will not regret going to see it, and with its short run, you should get tickets immediately. I will be buying tickets for my family to see it a second time, it’s just THAT good! The official opening night is Wednesday, May 22nd and it runs only until Saturday, May 25th.