Last night was opening night of Seussical, presented by Suzart Productions at Meridian Theatres at Centrepointe (in the studio). This is the fourth Suzart show that I have had the pleasure of seeing, and the directorial/production team of Jennifer Gabriel, Cheryl Cavell, Catherine Spear-Ducasse, Marc Seguin, Cass Marks, and Sue Fowler-Dacey have done it again! Once again, it was a great, fun-filled evening at the theatre!

Unlike many others that I have reviewed lately, the Suzart shows are super family-friendly, with the exception of their After Dark series. They feature a mixture of talented children and adults, with this one being particularly kid-heavy. I think that this is great! It gives youngsters the opportunity to learn to love the stage and develop their skills from a really young age! Anything with a lot of kids can feel somewhat chaotic at times, with this one being no exception, but that works really well for this particular show! If you are a lover of Dr. Seuss, and/or have children, I have no doubt that you will enjoy this charming musical featuring some of his most beloved characters!

For those of you who are unfamiliar with the storyline, Seussical is narrated by none other than The Cat In the Hat. It follows the story of Horton (the one who hears a Who!) as he attempts to protect the people of Whoville. The storyline intertwines many of Seuss’ classic stories, and is very, very cute! I saw some characters that I was unfamiliar with, but by the end of the show, loved them as much as any other Seuss character!

Jenna Stevenson as Jojo- I have seen Stevenson in a few of Suzart’s shows, but until now, she has always played an ensemble member. Tonight, though, she took to center-stage, and wowed the audience as the creative and spunky Jojo. Stevenson did not miss a single cue or beat; her voice was flawless and she brought a huge energy to the show. She really was the perfect choice for this role, and was a crowd favourite! I am always amazed to see young people so confident on stage; kudos to Stevenson on a fantastic performance!

Dani Bone-Corbishley as Gertrude – I had never heard of this character before, but I LOVED her! Bone-Corbishley REALLY stood out to me in this role! First, she appears to be a very experienced actor….she truly embodied the character of Gertrude. Second, she has a beautiful voice that was a joy to listen to throughout the show. And finally, she really sparkled as this character…I found myself forgetting that it was just fiction, and rooting for her throughout! I feel as though she is one of those performers who can do any character, and I would love to see her on the stage again! 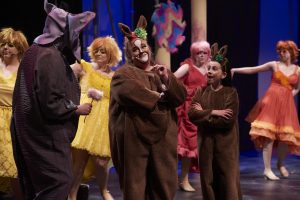 Holly Villeneuve as the Sour Kangaroo – When Villeneuve sang for the first time on stage tonight, there was a sense of awe among the audience. She is INCREDIBLE! Her voice is unlike any other that I have heard in theatre! It is soulful, smooth, and one of the best voices that I have heard live. She really blew me away. I was on the edge of my seat during her scenes, waiting for her next lines, because she is just that good! And vocals aside, she did a really great job portraying the Sour Kangaroo! Great facial expressions, postures….she just nailed it! I haven’t seen her in anything before, but I really, really hope to see her in more soon!

Kathryn McLaren as Mayzie La Bird – There is something unique and very likeable about McLaren as Mayzie La Bird! Throughout the show, she steals the scene and the stage numerous times, and she appears to be a very gifted dancer. She is another one of those ‘triple-threats’, with solid vocal, dance, and acting skills! She also brought an element of humour to the character, which I enjoyed. Another role that was very well cast!

Special recognition goes to the Bird Girls, whose singing was flawless from start to end! They had some beautiful harmonies and I did not hear a single wrong note. Bravo!

Also, I would be amiss if I did not mention the monkeys. These little guys were SO animated throughout the performance, and it really was hugely entertaining!

As with all of Suzart’s shows, the costumes, hair and makeup were incredible. There are too many people to mention, but these elements are a labour of love from many hardworking volunteers, who dedicate their time to making these performers look their best. The only character whose look I was not a fan of was The Cat in the Hat. I know from seeing him afterwards that the makeup looks quite different up close, but from where my seats were, with the lighting, he looked pretty scary/menacing! However, all in all, the creativity and talent of the hair and makeup team was apparent. There are a lot of fun looks!

The music was very well done overall! I didn’t see an orchestra, but I could certainly hear one, and they were very good. There were a few times throughout the performance when the singers were slightly off from the music, but it was opening night, and little hiccups like that are to be expected. What I noticed about this performance was that the sound quality was actually significantly better than it has been in other shows: you could hear the cast AND the orchestra very clearly, which is important, and is sometimes not the case in community theatre! However, there were times when the tempo of the music seemed slightly slow given what was going on onstage, which dampened the lively feel of the show somewhat. Other times, the electric energy of the orchestra was palpable! I would love to see that liveliness continue from start to finish of the performance! 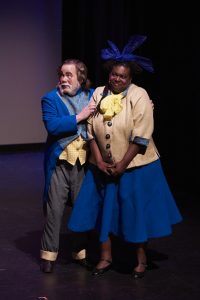 As with every theatrical production, there was one element that was not the best, and as an impartial reviewer, I do have to give the good with the bad. During this particular performance, there were a few characters who lacked any energy. With a show like this, where the characters have so much room to be big and over the top, a few fell a little flat, which became quite obvious as the show went on, while other actors brought such a strong, energetic presence. I am not sure if this was due to opening night jitters; I hope so, as this show has so many incredible moments, with so many talented performers. A few scenes felt as though they were dragging, simply due to some actors not bringing much ‘life’ to their characters; from the sighs of the older gentleman next to me, and twitters of conversation around me, I know that it was felt by the audience. It would be great to see the energy level come up so that it remains consistent throughout. I say this not to criticize, but to maintain my integrity as an honest and impartial reviewer, and this should not take away from the great performances demonstrated by the majority of the actors on stage.

This family-friendly show is running May 22nd-26th, and there are still some tickets available! It’s a great one to bring the kids to, as it has some familiar characters and is a whole lot of fun!