Theatre Kraken’s latest play, ‘Lysistrata’ opened this week at the Gladstone Theatre for a two-week performance run. I was one of a few hundred people lucky enough to have experienced this great play on opening night. ‘Lysistrata’ is a hilarious comedy that takes place in Greece in about 400BC. The Romans are at war with the Trojans, and all of the men are off fighting this war, leaving their wives at home alone. However, the suburban setting and costumes were representative of the mid 1900’s. Lysistrata, played by Steph Goodwin, leads the women on a sex strike in order to make peace by holding back what their husbands want more than anything. 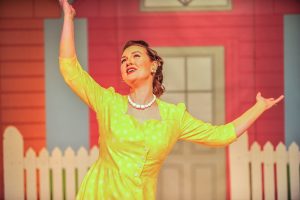 “In a society where men call the shots and women are confined to the role of docile housewife… what are women to do? Their men constantly abandon them to fight seemingly endless wars. In Aristophanes’s Lysistrata, one woman comes up with a plan: convince all women to go on a sex strike until the men come to their senses; and make peace.
What follows is a pitched battle of the sexes loaded with innuendo, biting social commentary, and lewd humour. Don’t miss this opportunity to see one of Ancient Greece’s funniest plays set against a modern backdrop of pristine, conformist, white-picketed suburbia.” – From the media release 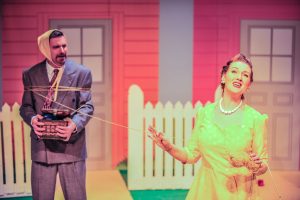 To say that this show has sexual innuendo or is sexualized is the understatement of the year. If you are not able to handle this type of humour, ‘Lysistrata’ isn’t for you. However, if you are, then you’ll absolutely love it!! This play is so funny, you will be dying of laughter through the entire show (particularly the second half). It really was an incredible performance, and the crazy laughter from fellow audience members really added to the atmosphere! I was pleasantly surprised at the various musical numbers throughout the show. Although not a musical per se, the added musical pieces were a great touch and really added to the comedy.

The set was very simple, with just a row of colourful suburban homes with white picket fences. It was simple and appropriate. The costumes, designed by Maureen Russell, were excellent and seemed to have been inspired by the 1950s (ish) era, reminiscent of rich housewives, clearly not intended to be representative of the Greek/Trojan era, which I found to be very innovative.  I loved the juxtaposition of the elegant, old fashioned language and upscale women’s costumes with the less ‘elegant’ language, to put it mildly. The costumes in this show was one of my favourite elements, it was just so creative! As with all performances at the Gladstone, the lighting and sound were flawless. 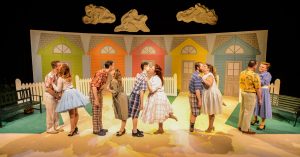 The entire cast are seasoned veterans of theatre, many with Theatre Kraken experience too, but four cast members stood out amongst the rest.

First, I want to mention the lead role of Lysistrata played by Steph Goodwin. Goodwin was outstanding in this complacent subdued housewife role, while managing to also portray a deeper desire to conspire against the men, who are off fighting a seemingly unnecessary war. She leads the women into a sex strike, persuading these sexually deprived women to hold off when their husbands return from war. She, herself is sexually deprived, and so she struggles with the conundrum of abstinence as well, at least at the beginning until her cause is fully realized.

Calonice, played by Shirley Manh, is effectively Lysistrata’s side kick, and while at first hesitant, eventually becomes her closest ally in plotting to end the war. Manh’s acting is hilarious, she is truly one of the funniest performers in this play. She is the most sexually frustrated of all the women, and has one-liner after one-liner of sexually explicit statements throughout the show. Her comedic timing and seasoned performing ability are perfect in this role; an excellent casting choice! 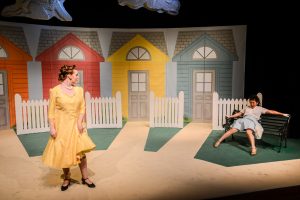 Myrrhina, played by Emma Hickey, was the next standout performance in this show, also playing an important role in the cause of Lysistrata. Hickey’s character is a little more timid at the beginning than the others, but opens up during a “torturous” seduction scene in the second half of the performance. Similar to Manh’s character, she plays a sexually deprived housewife whose desire to be with her husband is outweighed only by her hope for peace and helping to implement Lysistrata’s mission. She pulls off her role flawlessly and really adds to the hilarity of the show. The character that she plays is awkward in the funniest ways, and the scene where she seduces her husband had the audience in stitches!

Finally, I want to mention Cinesias, played by Nicholas Maillet. In the program Maillet is listed as “Cinesias/Chorus” and this is really interesting; although he is active in the first half of the show, he doesn’t stand out. In the second half however, he drops the chorus role and becomes Cinesias, who takes over the show in one crazy scene, and then he continues to dominate the second half of the show as a standout performance. I won’t give away the jokes, but for me, his character truly was the funniest part of the show. The audience was absolutely dying through his scenes. His performance flowed naturally, and any guy who has been in a similar situation can understand and feel for him. The scene where he is being seduced by Myrrhina truly was the most hilarious scene in theatre that I’ve ever witnessed. I can’t say much more about it without ruining the joke though, you’ll just have to see it for yourself! 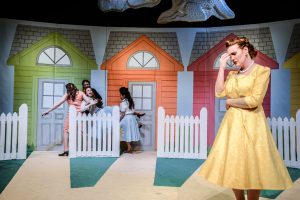 ‘Lysistrata’ was perfect; it was comedic and light, but also touched briefly on some deeper issues, such as the frivolity of war. All in all, though, I will say that this show was nonstop fun and laughter from start to end, and I would highly recommend it to anyone who can appreciate this type of humour. Although it’s quite explicit, it’s not uncomfortably so; you’re not going to be blushing awkwardly next to your date all night, it’s the right level of sexualized comedy. This show runs until May 18, with tickets still available either online or at the Gladstone Theatre’s box office. Don’t miss this show!