Ottawa Event Review: ‘We Will Rock You’ by Mississippi Mudds

This Mississippi Mudds have started their five-show production of ‘We Will Rock You’ and I was fortunate enough to get to attend opening night last night! For those of you who aren’t familiar with this production (I wasn’t until I went), it is conceptually very similar to ‘Mamma Mia,’ whereby a great musical is created entirely out of the songs of a famous artist or group. For ‘Mamma Mia’, it was ABBA music, and ‘We Will Rock You’ features the music of Queen. The concept of the story of ‘We Will Rock You’ is creative, and easy for an audience of any age or background to identify with. Although not specific on the year that it takes place, the story is set many years into the future of our planet, which is now referred to as “I-Planet,” a society that has outright banned music and imagination, and discourages free thought. The company “Global Soft” has the responsibility of maintaining control over society to ensure that current and future generations are completely technology-dependent for all aspects of life. The imposed motto of the company is to ensure the complete appropriation of imagination of all (kids). The CEO of Global Soft is a ferocious and highly sexualized half woman/half downloaded application, created to enforce the rules through her iron hammer approach, whose goal is to eliminate free thought, individualism and creativity. As in all societies with a similar governmental approach, there is a resistance that forms, and in this case, they are called the Bohemians. This story is about the struggle of the Bohemians as they attempt to find the last musical instrument in order to unite the people and bring back music. 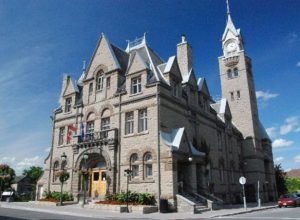 The venue for this show is the Carleton Place Town Hall. This beautifully historic building is located right on Bridge Street, beside the picturesque Mississippi River. This old church has an auditorium on the second floor that holds roughly 200 people (in surprisingly comfortable chairs as compared to many that I’ve sat on in the community theatre productions!) They have a nice little snack bar set up with a variety of chips, baked goods and drinks, and are raising money with a 50/50 draw. The only drawback to this amazing venue is that parking can be challenging in this area, so plan ahead (carpool!) and be prepared for the possibility of a bit of a walk.

Now, on to the show! Each time I go to a community theatre production for the first time, I adjust my expectations in terms of the quality. I get spoiled with some of the high-quality shows that I get to take in around Ottawa (for example Orpheus, and really anything at the Gladstone Theatre!) and I recognize that stepping into a lower budget, and community-created set is not always guaranteed to be as well done. But I needn’t have adjusted them here, as I was not disappointed in the quality of this production at all! The technical elements of the show were spot on, with no issues with the sound or lights, which is always a bonus, as that can really distract the audience from a performance. The costumes were absolutely perfect, and almost single-handedly made the performance. Yolande Hardy was the lead for the costume team, which did a fantastic job! I particularly loved the costumes for the four “Teen Queen” Ga-Ga girls, and the variety of stellar costumes for the Bohemian Rockers at the Hard Rock Café. These were so clever and well put together; it was fun to guess who they all were before their individual introductions. 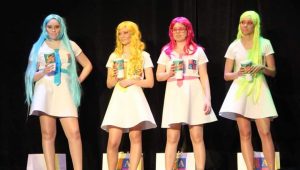 The next deserving mention would be the makeup team, led by the talented Dalene Gallo. Gallo has been doing makeup for the Mississippi Mudds for ten years, and this experience shows! Often in theatre productions, the make-up can be subdued, not noticeable to the untrained eye in the crowd. However, in ‘We Will Rock You,’ the makeup is BANG-ON…just totally in-your-face, and it looks incredible. The makeup is the perfect juxtaposition between the soft colours of the cookie-cutter world and the bright colours of the rebels, a throwback to the iconic rocker looks of the 70’s and 80’s. It’s extreme in some cases, which is necessary to depict these characters accurately in the society that is being portrayed. A prime example would be the Teen Queen Ga-Ga Girls, who are over-the-top colourful, with lots of fluorescents and pastels.

All of the lead roles in this show were cast perfectly, and they were all outstanding! I’d love to mention everyone in this review, but in the interest of time, I will keep it at five (or six) only. First, I’ll start with the lead roles. Galileo Figaro was played by Calvin Beaulieu, and he was just incredible. He is a true triple-threat, as he can sing, dance and act. The audience loved him! He worked beautifully well in conjunction with his counterpart, Scaramouche, played by Julie Hunter. I wouldn’t be surprised if they were a couple in real life, given how well they bicker with each other! Hunter was equally talented in all aspects of the show. Each of these leads were able to showcase their singing ability at various times throughout the show, and dazzled the audience while doing so.

The next duo of characters that deserves a shout out is the pair of Meatloaf and Britney Spears. Meatloaf, played by Stephanie Scott, and Britney Spears by Andrew McDougall (yes, you read that correctly) worked so well together and were cast perfectly for these roles. Although Scott didn’t have a big role in the performance, her singing is what earned her a place in my ‘stand out performance’ category. She had a solo in “No One But You” that was outstanding, and it was a real crowd-pleaser. She’s truly talented! McDougall provided the comedic relief in this show; he is truly hilarious and very entertaining. His timing was spot-on and his ridiculousness was definitely a highlight of the show for me! I feel as though he would be really fun to go out and have a beer with, as he seems to be one of those naturally really funny people.

Next up, I must mention the role of Killer Queen, played by Amy Bourne, who as mentioned before is half woman/half downloaded application (if I understood that right). Bourne is the CEO of Global Soft who leads the Secret Police in an effort to rid the world of music and creativity. In a typical tyrannical role, trying to oppress the resistance in her society, she leads Commander Khashoggi and his secret police in the hunt for the Bohemians, and their savior, “the dreamer” (Galileo Figaro). Hers was by far the best overall performance of this show. She is clearly not new to the stage and appeared to be completely comfortable in all aspects of the performance. She has a great voice and a commanding stage presence.

One final mention has to go out to Peter Meyer who played Buddy, a rock n’ roll rebel and an easy riding hippie. Although he had no significant singing or dancing parts, he played his role flawlessly; so natural, in fact, that it made me wonder if he just dug his costume out of an old trunk in his basement for this show!

As with any performance, it wasn’t 100% perfect (and I would not expect that of any show!) But as with any honest review, it’s important to highlight both the exceptional elements of the show and those that may have fallen short. In this musical, it may have come down to simple discrepancy: the leads were SO good, that they tended to outshine the background characters somewhat. This is not a critique of the ensemble’s talent, by any means, but there were a few cast members who clearly had less experience, who seemed to be a little out of their comfort zones. For the record, I would be completely out of my comfort zone on stage, so I can appreciate how difficult it would be to perform for such a large crowd. That being said, the fact that this is my only negative comment on a community theatrical production speaks to the amazing quality of the production overall.

I REALLY enjoyed this musical, and I hope that everyone who goes out to see it appreciates the comedy and the continuous musical references throughout. It’s highly entertaining, and worth the 30-minute drive to Carleton Place. Unfortunately, tickets are completely sold out for this musical, so if you really want to see it, follow the Mudds on Facebook, where they may post if a few tickets become available at the door; otherwise, you may have to try to buy some from someone who got them early and is unable to make it. The fact that their shows sell out before the run even starts further speaks to their excellence! The Mississippi Mudds’ next performance is in November where they are running the CP200+ show from November 14th to 23rd in celebration of Carlton Place’s 200th Anniversary.