April is coming to a close this week, and after a month of rain, it’s finally supposed to stop, and due to the rain, flowers are set to arrive over the next month. I think there’s a more concise way to say that. That brings warmer weather with it, and tulip festival starts in May! Bring on the patio weather!!! This week has some pretty special days. Saturday is Star Wars day so May the 4th be with you, and Sunday is Cinco de Mayo! Two great holidays back to back. I feel as though some may take offence to comparing Cinco de Mayo with Star Wars day, but I’ll take that risk; no offence intended.

This week is another great one for events, and random ones at that, so I’m struggling to put things into categories as I usually do for my weekly posts. It’s going to be a little more random this week. 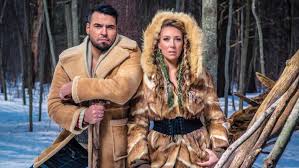 It’s a slower week for concerts, but I want to highlight that Twin Flames are playing on Monday night at St. Barnabas Church on James Street. They are incredible, and this is a nice little up close and personal venue that looks so nice!! Tickets are still available so grab them quick!! What else are you doing on Monday night anyway?

For live entertainment, there are a couple great musicals and theatre productions this week. First, at the Gladstone, the second of two weeks of “Scary Poppins!” is running. This show runs April 24th – May 4th So this is your last chance to catch it before it’s gone! Also entering it’s second and final weekend is “We Will Rock You” by the Mississippi Mudds featuring the music of Queen, however tickets, from what I understand, are sold out so you’ll have t find them second hand. At the NAC, from April 24th to May 5th, The Pigeon King is running daily and is the story of a farmer, who built a bird-breeding empire called Pigeon King International, using investments from hundreds of his nearly insolvent neighbours. For seven years, he offered a lifeline of financial hope to people whose luck had nearly run out. This is his story. 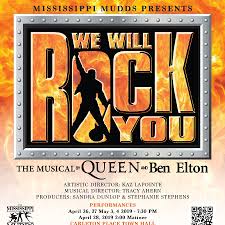 Festival season continues this week! If you avoided the cold weather this past weekend and didn’t get out to Sparks Street for their poutine festival, fear not, there’s another one this weekend at City Hall!! AND…yours truly is going to be a guest “celebrity” judge again this year!!! I’ve learned my lesson from last year though, judges aren’t expected to eat the entire poutine offering from all eighteen submissions. (I can’t believe I ate so much last year) This week’s Poutine Festival runs Thursday to Sunday. The European Union Short Film Festival is on at Arts Court from Thursday through Saturday. You can see the full line up on my website including an afternoon of family friendly programing on Saturday. 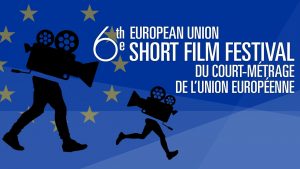 The Ottawa 67’s have made it to the finals for the OHL and the winner of that series goes on to the Memorial Cup! They’ve won 12 straight playoff games by blanking all their opponents so far. The championship series starts this week with game #1 on Friday, and Game #2 on Sunday at TD Place. The event pages are not yet posted on the TD Place website, so I don’t have a link just yet. I’ll update that as soon as possible. Also on the sports side, Ottawa is hosting the UFC on Saturday night at that Canadian Tire Centre.

After a busy weekend, I’m taking a couple days to recoup, but back at it on the weekend! As mentioned, I’ll be a guest celebrity judge at the Poutine Festival this weekend! Sunday, and I’ll be attending the monthly Card and Comic Show at Jim Durrell and on Saturday, I may swing by 613Flea to check out all the goodies that they are known to have there!

The always entertaining and amazingly talented Twin Flames are returning to the nation’s capital for a one-night only event on Monday April 29th at the St. Barnabas Church on James Street. This captivating duo combines two award-winning unique singer-songwriters Jaaji an Inuk Mohawk from Quqtaq, Nunavik and Chelsey June Algonquin Cree Métis from Ottawa. For more details on this show, check out the Harmony Concerts event page! Get your tickets now!!

There is a great event coming up on May 18th that was announced last week. “Let’s Party with the PepTides” is happening at the Ottawa Art Gallery in support of Ottawa Salus. The PepTides is a nine-member band with a distinctive larger-than-life pop sound. The five vocalists and four instrumentalists draw on eclectic influences, with elements of funk, soul, gospel, folk, Latin and new wave. In 2017, the band was featured on the cover of Ottawa Life Magazine as “Ottawa’s Best Band.” Most recently, they won Ottawa’s Jim Beam Indies, and we wish them the very best as they advance to the Canadian Independent Music Awards on May 11! Proceeds from this fabulous evening will support Ottawa Salus and the life-changing housing and support services for people living with severe mental illness in our community. 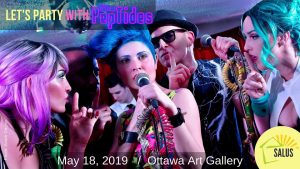 The Dragon Boat Festival released their concert line up last week!! I’m so excited, one of my favourite bands is coming back to Ottawa again!! Read about that and see the full announcement by clicking here.

I attended the “We Will Rock You” musical last Friday night. You can read my review by clicking here.

On April 17th, I was set up at eSAX: The Entrepreneur Social Advantage Experience so you can read my review and find out what that great event series is all about by clicking here!

Last Saturday night, I was so happy to attend the July Talk and Metric concert at TD Place. I am such a huge July Talk fan and loved the concert so much. How much??? Enough so I wrote a review! You can read it here.