Tonight was my first experience seeing a show by the Greely Players Association. I was fortunate enough to get to take in their performance of Shrek: The Musical. As a big fan of the movie Shrek, I was excited to see the musical rendition of the movie. Two years ago, I was able to to see the Orpheus Musical Theatre Company’s presentation of this musical, and it was fantastic, so I wasn’t sure how this smaller theatre company’s version would measure up to the high bar that Orpheus had previously set. Well, my concerns were alleviated within minutes, if not seconds, of the performance starting. I was instantly blown away by the high quality of every aspect of this show. 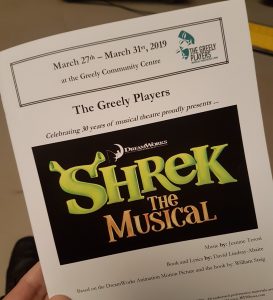 For those of you who aren’t familiar with the Greely Players Association, you may be surprised to learn that they are celebrating their 30 year anniversary this year. They are known for incredibly high caliber skills when it comes to performer’s talents, along with exceptional set, costume, and make-up design, as well as technical quality. They focus their efforts on one show per year, and regularly sell out most shows. Despite being slightly outside of the city, people still make the drive to take in their incredible performances. They are located, as the name suggests, in Greely, which is in the south end of Ottawa, only a 30-minute drive from the downtown core, just off of Bank Street. The Greely Community Association building is transformed into an amazing space to accommodate all aspects of a high-quality theatrical performance. This transformation is clearly the hard work of an army of volunteers helping out with building the set and creating the stage area. I was so impressed that a normally empty banquet hall was converted into a fully equipped stage set up, as good as any that you’d find at a permanent facility designed for theatrical performances.

The story of this show follows the plot of the movie very closely, but throws in tons of extra jokes and made-for-stage additions, creating funny, unexpected surprises for the audience. All of your favourite Shrek characters are in this musical which makes for a diverse show with something for everyone.

The incredible quality of the costumes deserves serious recognition. Each and every character throughout the play looked perfect in their costume, with intricate, elaborate make-up to go along with it. The costume design team was so creative in creating unique looks for a huge number of very specific characters, and they didn’t miss a thing! In particular, the costumes worn by the Duloc characters were fantastic. Equally worth mentioning is the makeup design. The sophistication of the make up was astounding on all of the characters, and although each could be singled out, I particularly loved the make up for the dragon; the scales on her face were perfect and worked so well with her elaborate costume.

The set design and use of props were equally impressive, continuously setting the scene perfectly, regardless of where it was taking place. The use of the changing pillars (for lack of a better term) was great and allowed for efficient and effective set changes. I want to also give a shout out to the entire technical team, who often go unrecognized in the theatre realm. The sound and lights were incredible throughout the entire show. I can appreciate how difficult it is to manage the sheer quantity of microphones required for many of the scenes. Also, I don’t want to leave out the orchestra, the music through the entire performance was exceptional! Flawless, even! Very impressive! 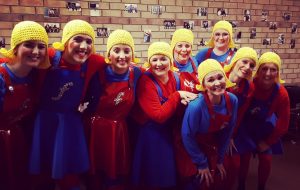 Now, on to my stand out performances! I have to say that as expected in all versions of Shrek, the overall success of the show depends on the performance of Donkey. This show is no exception and Dave Rama absolutely nailed the role!! He even sounds like Eddie Murphy! I can’t say enough about how great he was in this role, but I found myself laughing continuously when he was on stage, almost into hysterics at one particular scene. It was truly one of the funniest individual scenes that I’ve experience in musical theatre. His costume and make-up were also perfect; I loved his hooves!

The next stand out performance was by Violet Wyche, who played the Dragon as her primary role. Her performance and singing skills were top-notch, truly an incredibly talented woman who brought out the essence of the dragon character perfectly! The main scene where she is introduced is exceptional; her voice is soulful and blues-ey, and judging solely from what I saw at this performance, she has the best voice in the show!

Next up is Pinocchio, played by the exceptionally talented Eric Currie. With 10 years of experience with The Greely Players, he’s developed into an unbelievable actor and singer. He played this role perfectly, but what made it truly amazing was the use of his vocal abilities in pulling off the voice of Pinocchio. He hits an octave that I didn’t know existed, and it was hilarious listening to him speak. It takes a special kind of talent to pull off what he does. Once again, his costume and the extra props (you’ll see) that were added really made his character of a wooden boy perfect!

Finally, I must mention the performance of Shrek, played by Gordon Tait. He was perfect, and I mean PERFECT in this role! His authentic Scottish accent was ideal for the character of Shrek, and his height, vocal abilities, and natural stage presence made him the perfect choice for this prestigious lead role. His ability to command the stage in such a large production was incredible, and I was very surprised to learn that this is his first show with the Greely Players, and his first time acting since high school. He truly is a natural!

There were so many performances that were incredible in this show. There simply isn’t enough space to talk about the amazing array of talent that each and every performer has. Emily Porter as Fiona was fantastic through the show in both versions of her character (ogre and human); she is clearly a very experienced and gifted singer, and has great comedic timing. Bill Sangalli as Lord Farquaad was hilarious, and must have knees made of steel to be able to move around so quickly. Tara St. Pierre as Humpty Dumpty, and the surprise Giraffe, got to show off a bit of her superior singing ability. Maya Desrosiers also stood out to me in the role of Fairy Godmother; she has an exceptional stage presence and is very expressive. She appears to be a triple-threat in acting, singing, and dancing, and it is obvious that she loves what she does! Finally, Lauren Ritchie as young Fiona, appeared to be the youngest cast member, and even when up against some powerhouse voices, really did a fantastic job! She has a bright future ahead of her in theatre!

I truly can’t say enough good things about this performance. As a first-time Greely Players audience member, I was thoroughly impressed! It absolutely exceeded my expectations, and left me wanting more. This is definitely a high-quality theatrical production that the entire family will absolutely love! There are still a few tickets available for some of the shows, but get them quickly, as I can pretty much guarantee that they will sell out!! You can check out their website by clicking here!