The highly anticipated annual event has finally arrived! Each year Ottawans look forward to having a look at the year’s most exciting music festival: RBC Bluesfest! There were a couple sneak peaks already announced this year with Eric Church, and the Back Street Boys (enter squealing sound here). #backstreetsback

For the remainder of the line-up, wait no longer, the announcement has come, and it’s another amazing year!

March 5, 2019 Ottawa, ON―RBC Bluesfest organizers today announced a star-packed lineup for their 25th anniversary edition. From iconic classic-rock favourites to today’s top trending acts, this year’s festival boasts a wealth of world-class talent for what has become an Ottawa institution.

“What we’re most proud of is the fact that we’ve become a home-grown success,” says Mark Monahan, the festival’s executive and artistic director. “Much of that success is based on community―Ottawa music fans, countless volunteers, local musicians, long-standing staff, contractors, suppliers and sponsors, who all come together year after year to stage this massive event.

“Clearly the music is front and centre,” adds Monahan, “but the festival’s popularity has a lot to do with bringing the community together for shared experiences. So keep an eye out for upcoming announcements about the many ways we’ll be adding to those experiences this year, while celebrating our 25th anniversary.”

RBC Bluesfest runs from July 4 to 14. The festival site at LeBreton Flats Park offers a wide variety of food and merchandise concessions and is fully licensed.  Check the website for more to come in the weeks ahead. 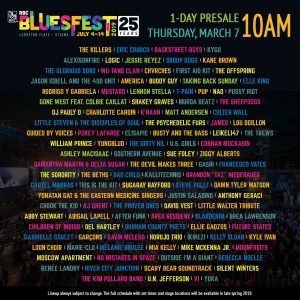