Ottawa Event Review: Weird: The Witches of Macbeth, and #Faustus

Tonight was opening night for a two week double bill at The Gladstone Theatre running, until February 9th. Theatre Kraken’s pair of shows consisted of “Weird: The Witches of Macbeth” and “#Faustus”. You can purchase tickets for either, or both shows together for only a small upcharge. Each show runs about 45 minutes to an hour, with roughly thirty minutes in between for set change and an intermission.

The Gladstone Theatre is a fantastic venue, I absolutely love going there. It’s got such a quaint feel, much like a small-town theatre, but it plays host to many high-quality performances. Over the past couple of years, I’ve been lucky to have seen some of these performances, including Cry Baby, Fierce, Cloudburst, and most recently, Minding Frankie. You can find reviews for these outstanding plays on my website. I’ve never once left the Gladstone feeling disappointed in a performance. I’m sorry to say that track record ended tonight.

“Weird: The Witches of Macbeth” was delightfully entertaining. The three women in this performance were all incredibly talented, each with their own specialty. The stage set up was only one single prop: an aerial silk ribbon stand set up right in the middle of the stage. The central feature in this play was the amazing aerial choreography performed throughout, enhancing the story that was taking place in conjunction. I can’t say enough about the amazing talent that these women have, to perform such fantastic tricks while still maintaining character. However, whereas normally, a play is written and then the cast added, with the direction team casting actors based on their talent, and what they will bring to each character to make the play succeed, I feel as though in this case, the opposite happened here. The play actually seemed to be built around the talent of the cast. Lindsay Bellaire was by far my favourite performer, she appeared to be the most talented aerial performer as well as an outstanding actress. She made this play work! Emily Hughes played the second of the ‘older’ witches, and she was also incredible when up in the silks, clearly very talented as well. The third witch, played by Lauren Fields, didn’t have as much time on the silk ribbons, as her forte appears to be acting, and therefore she was more focused on that aspect of the play and did a great job as well. 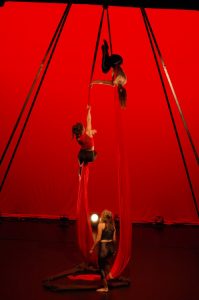 I’m not much of a Shakespeare fan; I didn’t enjoy it back in the 14th century when I was in high school as I just didn’t grasp it. Needless to say, that fact hasn’t changed. Between that, and so much time passing since I studied Macbeth, I feel as though I lost much of the story that was unfolding on the stage. However, with that being said, it’s been suggested to me that if the entertainment value of a performance is good enough, the intricate details of the story should not matter. So I’m going to go with that. These three were all talented and entertaining enough for me to still suggest going to see this performance. The story alone is not worth the price of a ticket, but the sheer talent of all three of these women is amazing, and if the setting was different and they were performing at cirque du soleil, everyone would be amazed…they’re THAT GOOD! Also, although there are only three people in this performance, a special shout out is needed to Lisa Magill for the costume design and also to the make-up artist. Both were outstanding! 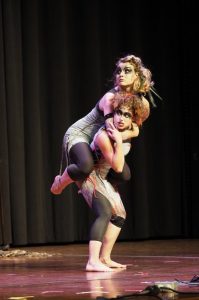 Next up was #Faustus. I think the fact that I still have no idea what #Faustus was about is telling. The basic concept of this play is simple enough: Dr. Faustus, played by William Beddoe, makes a deal with the devil, via the Devil’s messenger, Mephistopheles, played by Steph Goodwin. Beddoe trades his soul and apparently his life to the Devil for 24 hours of having Goodwin’s character at his beck and call to satisfy all his needs. After the 24 hours is up, he dies (??) Other than that, I have no idea what it was about. 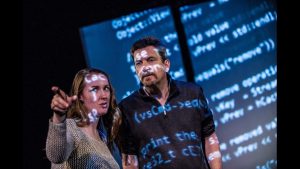 Originally written for the 2018 Fringe Festival, this story features the old English-style of language, but is adapted to modern day events, including technological advances and current international affairs such as the war on ISIS. This made it even more confusing to me; why keep the old English language if they’re going to update it with modern events and technology? 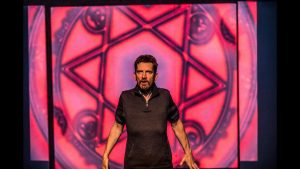 The play was about 45 minutes long, and other than the first five minutes, I really have no idea what was going on. There were some great audio/visual effects throughout the play, including large screens with video and background images, which gave a technological feel to the story. There were also pre-recorded video conferencing discussions (Skype) with other people, and finally a series of clips with war-time scenes of large explosions and a whole lot of mass-destruction and death. The videos were cool, but the relevance of them eluded me. There were only two people performing in this play, and both were decent actors, but neither really stood out as something special to see. Both have quite the resume of performances, and a lot of theatrical experience, so I’m assuming that this play just wasn’t ideal to show off their abilities.

I would not recommend seeing #faustus. Perhaps I’m being a little harsh, and maybe a more intellectual type would appreciate it to a greater extent than I did, but I found myself confused throughout the entirety of the play, and did not particularly enjoy it.

**Photos provided by The Gladstone Theatre and Theatre Kraken