Tonight,  I attended opening night of Minding Frankie at The Gladstone Theatre. This play is based on the book by Maeve Binchy, and was adapted for the stage beautifully by Shay Linehan. This marked the debut for Minding Frankie in Ottawa, and I am so glad that I was able to take in this spectacular show. 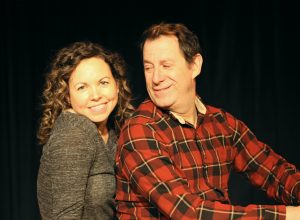 Minding Frankie is set in Dublin and Galway, Ireland, in the 1980’s, and later in the year 2010. Prior to the show opening, the audience was treated to Irish music playing in the theatre, which really helped to set the tone for the show. The show features a number of characters, who were portrayed by just two actors. I haven’t ever seen this done in a play before, and I was really wowed by how only two people could bring so much life and energy to a show that the audience almost forgot that there were only the two of them! 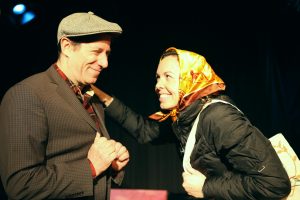 This performance is a comedy, mostly, and featured a number of laugh out loud moments. But it also touched on some very difficult topics: addiction, death, the struggles of single-parenthood, and moving on from grief. The audience experienced all of these emotions throughout the play, thanks to moving performances from Lawrence Evenchick (Noel Lynch) and Vivian Burns (Moira Tierney/Stella Dickson). And while these were the primary characters that these talented actors portrayed, they each took on a number of smaller roles throughout the show, which was not only impressive, but incredibly entertaining! My personal favourite was Burns’ ‘Veronica.’ Absolutely hilarious! Something that I found to be remarkable from these two actors was their accents! They really and truly sounded authentically Irish, and they even had slight variations of the accent for separate characters! This really contributed to the audience’s experience, feeling as though we were actually in Ireland. Very well done! Having previously seen Evenchick in Cry Baby, and Burns in Shrek (reviews for both at the end of this article), I was not at all surprised at the level of talent that this play had. 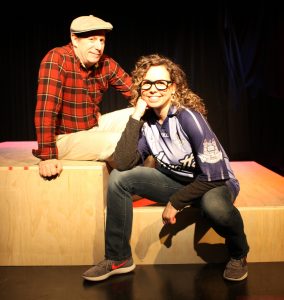 The set was very basic, and the props were almost non-existent; in those regards, this is perhaps the most minimalistic of any performance that I have ever seen. I was a little bit confused about a few of the elements, like the stuffed animals on the side of the stage for the entirety of the show, and why there were a few real props, but mostly they were just left to the imagination of the audience. Nonetheless, I do believe that this eliminated distractions, and allowed for the audience to focus more on the performances of the actors, and they really made it not only work, but work exceptionally well!

One of my favourite things about this show is that although there was no real baby Frankie, it felt as though there was. Through sound effects, body postures, and quite plainly, the acting skills of Evenchick and Burns, it was as though she was physically there. Just seeing their reactions to her made her so real!

I really enjoyed both the sound and the lighting design. They really helped in creating the experience of changing locations and characters. The voice over work added something very special to the show as well.

I would highly recommend seeing this heartwarming play while it is in Ottawa! Minding Frankie runs through January 26th at The Gladstone Theatre. You can find tickets here! Don’t miss this extraordinary show with some of Ottawa’s greatest talent!

Past Reviews that were referenced:

**Photos on this review were provided by the production team as promotional photos.