Exciting Sens Book Release!! The History of the Sens Jersey

Hey there, this isn’t my usual kind of post, but I thought it was a really cool idea, and it’s put together after years of work from some local Ottawa peeps! This would be perfect for any Sens fan so I thought I’d pass it along, as we can all use a bit of Sens pride these days! 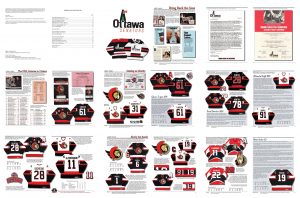 The Story Behind the Story

Once again teaming up with Production Assistant, Hilary Chaiton, Chris first met with several local Sens fans and game-worn jersey collectors. Ryan Plue, his brother Jonathan Plue, Marc Gratton, and Kevin Lee provided access to the bulk of the jerseys and historical memorabilia, while Jon and Denis Rouleau, Tim Wiliton, Chris Mustakas, and Chris Atack provided complimentary pieces to help round out the collection and story.

A Complete Guide to all Things Sens

Using over 350 high resolution images, the book aims to highlight the complete evolution of the team’s jerseys but goes so much further: season by season summations, player write-ups, fun facts and ‘Alfie Trivia’ throughout, all-time season records, all-time captains and franchise leaders, all-time minor league affiliates, stats, stats, and more stats. All told, The History of the Sens Jersey, 1992-2018, serves as a complete guide to 25+ years of the modern-day Ottawa Senators franchise!

Simply put – if you’re a Sens fan, this is a must-have #1 resource.

Following the release of the first book which highlights the history and evolution of NHL jerseys between 1983-1993, Chris Delorme and Hilary Chaiton started working on the next decade of NHL jerseys, but quickly recognized the potential to write team specific books. Subsequently, while writing The History of the Sens Jersey, 1992-2018, Chris was also travelling to meet up with Pittsburgh Penguins collectors, and has since drafted The History of the Pens Jersey, 1967-2018, highlighting 50+ years of the Pittsburgh Penguins franchise. The Pens iteration is expected for release in 2019, while The History of the NHL Hockey Jersey, 1994-2004, a current work in progress, should be available in 2020.

The History of the Sens Jersey, 1992-2018 can be purchased now through Amazon.ca using the following link https://amzn.to/2C54UVD

A special thanks to Hilary Chaiton, and all those who supported Chris during the production of this book!