Thursday night was a Sparkle Jolly Twinkle Jingle time thanks to Suzart’s latest production of Elf: The Musical!! If you’re a fan of the classic Christmas film “Elf” starring Will Ferrell, then you’ll absolutely love this performance! Directed by the talented Ellen Seguin, produced by Cass Marks (who beautifully choreographed James and the Giant Peach), and Executive Produced by Cheryl Cavell (who seems to be able to do ANYTHING!), this show completely captured the hearts of the audience! The cast was brilliant, the choreography fantastic, and the set, props and costumes once again made the show! Performed in Meridian Theatre’s Studio theatre, this family friendly production is not-to-be-missed!

The “Elf” production follows the same basic concept and plot as the movie, but even if you haven’t seen the film, nothing would be lost in the overall story. The music by Matthew Sklar, directed by Alina Homes, was absolutely flawless throughout the show, and balanced a perfect mix of musical numbers with conversational scenes. The band was situated on the upper level of the stage area visible to the audience, which is a fun feature that the Studio Theatre offers. I really enjoyed actually seeing the band performing at the same time as the theatrical performance as well. Many musicals have stand out performances for dance, singing or acting, but this cast was a fantastic mix of each skill set. However, that being said, and following a similar format to my other musical reviews, some performers are deserving of a special shout out! 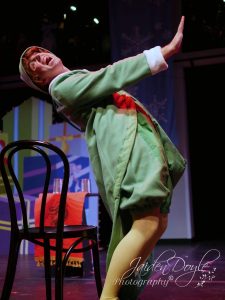 It would be irresponsible of me not to first mention Matt Lorz, who played “Buddy the Elf”. He was absolutely fantastic, capturing perfectly the cherished mannerisms and iconic red curly hair made famous by Will Ferrell in the film portrayal of Buddy. Although not as tall and awkward as Ferrell, Lorz absolutely nailed the enthusiasm and excitement for Christmas in every scene, with a beaming smile throughout the whole show. His acting, singing and dancing were all equally incredible and as an audience member watching the show, I found it to be impossible not to mirror his huge smile.

The supporting cast of the ensemble was also incredible, with many very strong performers. Angela Dale, as Emily, was fantastic! She has a beautiful, rich voice, and brought depth and emotion to the character of Buddy’s ‘Stepmom’. I really enjoyed her scenes! I don’t think that I have seen her in any shows before, but her performance in Elf: The Musical, was a real treat. 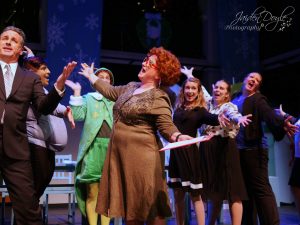 The individual features and strengths of each member of the ensemble made for a very entertaining supporting cast. I’ve found some other theatrical or musical performances host an ensemble who tend to blend into the back ground, with few standing out from the others, but Elf was the opposite; the ensemble made the show with this talented group of individuals. I’d like to specifically mention two individuals who had standout performances in the ensemble. Taryn Mader really stood out; her versatile skill set allowed her to play many different characters throughout the production flawlessly. Her ability to portray each individual character was brilliant; her facial expressions, regardless of the character, were perfect. She was equally strong in her acting, singing and dancing ability: she is very obviously a well-trained dancer, which was clear in every dance number. She became the focal point of the ensemble in each scene that she was in. She is just one of those performers who commands the stage, whom the audience is immediately drawn to.  Another absolute stand-out performance in the ensemble was by Shreyas Batra, whose stage presence is incredible! His dancing was fantastic, he brought a style to the movements that was really enjoyable to watch. His hilarious one-liners (whether scripted or not), really made the audience laugh; his comedic timing is perfect. I particularly enjoyed his performance in Nobody Cares About Santa. He’s infinitely talented and I would love to see him in more shows in the future. 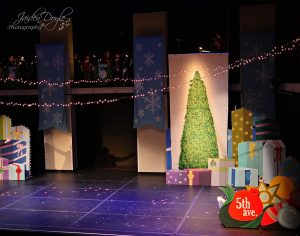 A performance this elaborate can’t be a success without the dedicated work of the behind the scenes support of the costume, prop and set developers. Costumes designed by Tracy Byers-Reid were perfect!! They really set the tone for the show and brought each character to life. I’m comfortable in saying that these were some of the best costumes in a musical that I’ve seen; truly great work by Tracy and her team. The props designer, Sandy Richards, also deserves some “props” as there was clearly a lot of hard work done to perfect the many items needed to pull off such a great production. Finally, the set design was brilliant, with the perfect balance of creativity and resourcefulness; there were no major set changes, but enough to accurately depict each scene. The signs on either side of the stage indicating set location were a nice touch, but not even required, as the sets were so well done, sufficiently detailed with the design and use of props. Christy Bindhardt and her team did an excellent job!

Elf: The Musical was incredible, and I loved every single minute of it. The fun and light-hearted story was perfectly executed by all members of the cast and crew. Elf: The Movie is a holiday must, and Elf: The Musical is no different. The only negative side of this performance is that its run is limited! At the time of writing this, there are only four shows left!! You can catch this tonight, Friday December 7th at 7:30, and then two shows Saturday, with a matinee and an evening show, and then a matinee on Sunday. There’s not much time left, but you really need to get out this weekend and see the show! Your kids will love it, and so will you!! With tickets ranging from only $27.50 – $35, this is definitely an affordable night (or afternoon) out that you need to jump on before it’s gone. Buy your tickets right away by clicking here!!