Friday night, I was happy to be invited to go and attend Orpheus’ latest play, Chitty Chitty Bang Bang. When I first heard this was coming, I had memories from my childhood of the car making the “chitty chitty bang bang, chitty chitty bang bang” noise as it drove/flew along. That’s the extent of the memory, because let’s face it, it was made in 1969, a little before my time. We arrived at Meridian Theatres @Centrepointe (new-ish name) about twenty minutes prior to the show starting and it was already packed! The parking lot was very full and there were people everywhere. The snow yesterday didn’t scare anyone away from a night out at the theatre. We made our way to our seats and settled in for the performance. The audience was as mixed as any I’ve seen. There were a respectable number of behaved children, right up until people who may have been in their twenties (or even thirties) when the movie was first produced by MGM back in the time of peace and love. The one consistency was that everyone seemed to be excited about the show!

At 7:30, opening night began without a hitch, and almost immediately, all could see that Orpheus has now set a new bar for best set and costume design. They’re known for elaborate costumes and exceptional sets, but this was something else. Back when I saw the Orpheus production of Skrek, I was impressed and didn’t think they could top it, but they have definitely outdone themselves with Chity Chitty Bang Bang…..and that’s even BEFORE you see the car!! Co-set design leads Jenn Donnelly and Tony Walker absolutely made the show with set after set of not just impressive pieces, but also practical pieces that can be used by the performers, not just seen by the audience. The costume design team of Pauline Doggett and Alison Foley were no less impressive with each and every scene showing off the design talents of these two ladies. Wow…just wow! I also want to talk a bit about the car. Chitty is incredible; it has so much detail, and clearly many, many hours of work went into creating this impressive car. Kudos to the team that built Chitty. I’m sure that everyone leaving this play wanted one for themselves at home. (Future Charity auction??) 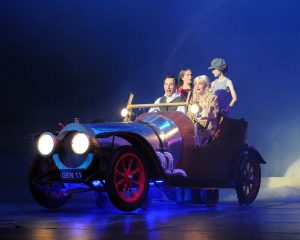 First and foremost, the standout performance from this show, for both myself and for other audience members that I spoke to, was that of Sophia Pierce as Jemima Potts. I first saw Sophia in Suzart’s Annie last December, where she stole the show as Molly. Next, she charmed audiences as Jane Banks in last summer’s Mary Poppins Jr, also with Suzart. Little Sophia, only 8 years old, proves the old adage that, “some people are just born to perform.” Full of stage presence and charisma, and an extremely talented singer, dancer, and actress, Sophia really made this show what it was.

Next, the infinitely talented Paul Melsness wowed in his portrayal of Caractacus Potts. I saw Melsness in both Shrek and Grease, and while he always impresses, he really blew me away in this leading role. I haven’t ever seen the true scope of his abilities, until now. He has a great voice, is a fantastic dancer, and brought a sensitivity to the character of Caractacus that I hadn’t expected. While he had many great moments in this show, I particularly loved his dance number during Me Ol’ Bamboo. I enjoyed all of his scenes, and don’t think that Orpheus could have cast a better Caractacus. I truly hope to see Melsness in many leading roles to come!

I would be amiss if I did not mention other performances that really made this show spectacular. Kelly Fuoco and Jared Langdon, as Baroness and Baron, were incredibly entertaining. There were many ‘laughing out loud’ moments while these two were on stage. While one can tell from watching these two that they are both talented individuals, the way that they portrayed this quirky couple together was truly magical. I was surprised to read in the program that Langdon is fairly new to the performing scene, as both of these actors appear to be seasoned professionals. Huge kudos to them both on a job very well done!

Sam Smith and Marcus Winchester, as Spy Goran (Gordon) and Spy Boris (Doris), also brought something special to this show. These two were hilarious! From their silly accents to their ridiculous antics, these characters were truly loveable! Along with Fuoco and Langdon, these two added the perfect amount of comic relief to the show. I thoroughly enjoyed each and every one of their scenes.

Finally, Andréa Black, as Truly Scrumptious, had some really great scenes and songs, but in particular, her performance during Doll on a Music Box had the audience transfixed. The execution of the choreography for this song was extraordinary, and it felt as though the entire audience was holding their breath during this song. It was absolutely beautiful.

Lastly, Michael McSheffrey as the Toymaker, and Kirsten Mainwood (ensemble), stood out in all of their respective scenes. McSheffrey really embodied the character of the Toymaker, offering a remarkable dramatic performance. And for an ensemble member (Mainwood) to stand out amongst all of the other ensemble on the stage speaks to the magnetism and stage presence that she has.

While I love all of Orpheus’ shows, and this was no exception, I will say that I was not as impressed as I usually am by the ensemble. I am not sure if the choreography was too difficult for their respective dance levels, but a number of the ensemble struggled throughout the show with the choreography. Now, I am not a picky critic, so for me to mention something as being not up to par, it has to be pretty obvious. You may have read in my last review (Mama Mia), that what I LOVED was the simple choreography, because it was performed flawlessly by the entire company. You can find that review here. There were many mistakes throughout this performance, and while I don’t like to specify actors individually, they came from the ensemble. However, despite these errors, the strength of the performances by other ensemble members, including Kirsten Mainwood and Austin Fogarty, made the numbers enjoyable to watch nonetheless. 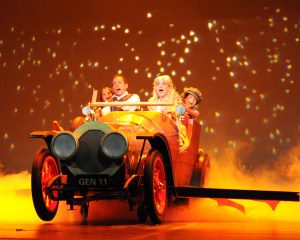 To sum up the review, this show is definitely worth seeing! There were some great stand out performances, and the set and costume design were incredible, really making it feel more like a live movie as opposed to “community” theatre. However, I feel as though it falters in the typical Orpheus quality when it comes to the organization of the larger dance routines. Although it was a great show, it was not one of Orpheus’ best shows, despite the exceptional stand out performances and fantastic set and costume designs. With that being said, I have no regrets about seeing it, and would highly recommend this family friendly, entertaining show to anyone!

Chitty Chitty Bang Bang runs November 16th – 25th at Meridian Theatres @ Centrepointe at 7:30 each night, with matinees Sunday afternoons. I recommend that you see it, and bring your kids, they’ll love it too! Be warned however, you will leave with the Chitty Chitty Bang Bang song in your mind for hours to come! You can buy your tickets through the Meridian Website by clicking here!!