This year was the third annual Tweed Shindig hosted by Tweed Inc. Tweed, if you’re not familiar with it, in its most simplistic description, is a recreational cannabis readiness company. Due to recent federal legislation, recreational marijuana will be legal as of October 17th. Tweed has become a massive international company, and in an effort to give back to the community, they hold their Shindig festival for next to nothing for patrons. Local Smith’s Falls residents have the opportunity to get free admission with proof of address, and others pay a mere $15 to take in an extraordinary line-up of musical artists and festival type activities. Also, that $15 gets donated to local charities!! 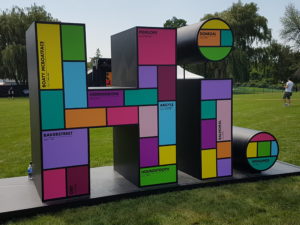 Despite the obvious lack of profit, Tweed spares no expense for this festival. They bring in the best in sound/lighting/activities and all other typical festival necessities. The festival is well staffed by volunteers, who run the booths, offer excellent customer service and help clean up. The grounds were freshly constructed this year with new grass and a new layout. Despite the nature of the product Tweed is famous for, this is a child/family friendly event offering multiple bouncy castles and fun games for kids to play. The one major surprise for me was that this is a dry event, meaning no alcohol is being served. Beer sales are typically the make or break financial necessity that many festivals rely on, but this one is very different in that aspect. This keeps the potential for a drunken crowd down, and makes a much more pleasant atmosphere for families. There were a few food options available to the concert goers as well: Smoke’s Poutinerie seemed to be the most common go-to, but you could also find some great Asian Tacos too (Among other offerings)!! Another great bonus is that Tweed offered a shuttle bus route from Kanata, Ottawa, Carleton Place and Smith’s Falls.

**Picture taken prior to doors opening

The festival is based around the live music provided on the stage. There were ten performances this year, ranging in time from twenty minutes to a full hour. Doors opened at 1pm and the bands started playing just after 2. Hosting the bands and acting as emcee for the event was Todd Shapiro, in his second straight year in this role. He did a fantastic job, and is clearly passionate about the company and the event. Previous years have hosted such big names as Mother Mother and Classified. This year, there was talk of a “top-secret” artist that only select few knew about. Even now, their website doesn’t post who the closing act was. On the Thursday just before the festival, word got out that Snoop Dogg would close the festival, which is a sure way to sell out tickets….immediately! With all that being said, here are my thoughts on the full music line-up! 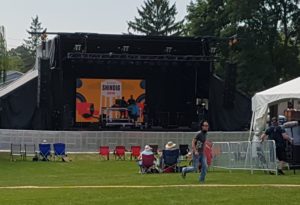 **Picture taken prior to doors opening

Adam Linton and The Wild Card – this opening act was only on for about 20 minutes. I think the most positive thing to say about them is that it looks as though the practice will benefit their future. Each individual appears to have some talent, and Adam truly can sing. I’m not sure if there were nerves going on with the band, but the performance was only sub-par. There were times when the percussion simply was not on beat with the rest of the band, and it threw off the music for me. Fortunately for Adam, the crowd, albeit small at this point, didn’t seem to notice or react. I’m sure there’s a bright future for them, but for the Tweed event, opening act was probably a good slot.

Last Drop Orchestra – This change in pace from Adam Linton was much needed. This band seems like a group of old friends playing their favourites from their vinyl collection. They’re all very talented musicians and play well together. It was an enjoyable concert all the way through. They are entertaining in between songs with little one-liners, dad-jokes and a commentary of the music. They were lots of fun!

River City Junction – For many, this band needs no introduction. They are simply amazing. The beautiful voice of lead singer Caroline Addison leads the way right from the first note, and captures their audience through the entire concert. They are described as a “Canadian Blues/Pop power trio,” and they hold true to the name. All three members are incredibly talented and through their history of playing for larger audiences at big festivals, they mesh perfectly and are a cohesive and perfect match for each other’s talents. If you haven’t seen them before, you’re definitely missing out on an experience. My only complaint about their set is that it wasn’t long enough.

Slim Moore – As the shows progressed through the day, it was obvious that the organizers were looking to book a mix of musical styles and were covering everything. I’ve never seen Slim Moore before, and when I saw that he was a reggae act, I was a little worried at first. Many reggae acts, in my experience, simply cover Bob Marley music for the duration of their show. Not that there’s anything wrong with Bob Marley, I’m a huge fan, but I feel it lacks originality when an act covers him exclusively. Slim Moore was anything but a typical reggae concert. He played entirely original music, with only one Marley cover at the end (Redemption Song), and even that had his own twist. He was really fun to watch, with amazing support from his band. I just loved it….what a great entertainer!

Mosley – This local Ottawa band was also really fun!! Their incredibly energetic indie/Rock band was a delight to the whole crowd, particularly lead singer, Dani Vézina who stole the show with her stage presence and obvious love for music. Judging by their website, they play quite frequently in the Ottawa area, and I would highly suggest you take them in!

Blakdenim – Yes, I spelled that right. When they were first introduced by host Todd Shapiro, I wrote down their name as “Black Denim”; then about half way through their set, they had a song “Blakdenim, one word, no “C” WHAT?!” so I pulled out my notes and made the change right away, to the amusement of a friend standing beside me. I don’t really know what to say about this band other than that they were phenomenal! The two lead singers worked together flawlessly, both with incredible entertainment and vocal talents. Trying hard to think of a famous duo to compare them to, I’d suggest Kanye meets Adele. The supporting band was also fantastic! This was quite possibly my favourite performance of the day, with non-stop excitement and an incredible stage presence. The crowd just ate it up and was left wanting more!

Mike Rita (Comedian) – After Blakdenim left the stage, it was announced that the next act was a comedian. At first, I thought this to be a poor line-up choice after the energy that the crowd had just experienced; still amped up on adrenaline, I felt that a comedian, regardless of how funny they were, would just bring everyone down. Well, Mike Rita proved me wrong. He was really funny, and for the first time between acts, almost nobody left their spot at the stage. The crowd loved him and his humour, which revolved around the consumption of weed (topical for the festival). He was really funny; check him out if he is ever in your area, it appears that he travels a lot for performances.

Iskwé – This aboriginal phenom from Manitoba doesn’t need much introduction. I’m sad to say that I’ve never seen her live before, but happy to now have crossed that off of my bucket list. She was exactly as advertised, a great mix of vocal brilliance, and a true entertainer with crowd interaction and a touch of sexuality in her show. She included a dedication to all of the missing aboriginal women, and sang a song that was inspired by someone she knew who went missing when she went back home to Manitoba four summers ago. It was incredibly heartfelt, and touching for everyone. What a powerful performance all around!

The Sorority –To be completely honest, I’m not sure I understand this group. The concert started with a set from the group DJ, DJ Mel Boogie, who, for nearly 20 minutes, played the same music (for the most part) as the resident DJ playing between the shows. The crowd was into it at first, but as time dragged on with no actual concert, the interest level dropped. Finally, the act arrived on stage. The Sorority is comprised of four individuals from Toronto who perform as solo artists as well, but who sometimes come together to form this hip-hop meets spice girls-type act. My first impression of them was confusion. I looked around at the crowd to find similar facial expressions, and was clearly not alone with this. There were jaw drops and furrowed brows everywhere; nobody knew what to make of this concert/show(??). I spent the majority of the concert trying to figure out what it reminded me of. Finally, towards the end it clicked: this was like an “Orange is the new Black” talent show.

Snoop Dogg – The long-kept secret headliner for the show came on stage just after 10pm for his one-hour set. This is my fourth time seeing Snoop and he never fails to entertain the crowd. Despite his many decades performing, his simplistic performance draws a huge crowd who all love him! He doesn’t waste any time on stage, and gives the crowd absolutely everything they came for by playing all of his classic songs. He even threw a tribute into the middle of the concert for his fallen hip-hop brethren, Tupac, Biggie and Eazy E. He even played some of his collaboration songs with other artists and took over the lead artist role. This was most evident with California Girls, with Snoop singing the Katy Perry part of the song. It was so fun, and the crowd loved it! He is truly a great performer, and that has not waned over the years; I’m sure he’ll be touring for much longer, and hopefully he’ll be back in Ottawa soon! A true legend!

Overall, the line-up was absolutely stellar!! It was by far the best variety of talent that I’ve seen in a festival like this one, with minimal down time in between acts. The festival itself was very professionally run, while at the same time had a very relaxed and chill atmosphere. From my perspective, there were no issues and everyone had a great time! What a treat, I’ll be sure to go back every year!