Harry Potter™ fans, young and old, pay attention! I am absolutely thrilled to announce that tickets are on sale for an amazing upcoming event in Ottawa! Coming to the Canadian Tire Centre, January 26th 2019, is a once in a lifetime opportunity to see Harry Potter and the Philosopher’s Stone™ in Concert featuring the NAC Orchestra!

The Harry Potter™ film series is one of those once-in-a-lifetime cultural phenomena that continues to delight millions of fans around the world. This concert will feature the NAC Orchestra performing every note from Harry Potter and the Philosopher’s Stone™. Audiences will be able to relive the magic of the film in high-definition on a 40-foot screen while hearing the orchestra perform John Williams’ unforgettable score.

Tickets are now on sale!! Buy your tickets quickly as it’s sure to sell out!! CLICK THIS LINK TO PURCHASE YOUR TICKETS! 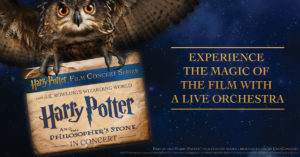