I’m overdue for a little opinion piece about random topics. This one is going to seem a bit like a review, but it’s more of an awareness post. I’m writing about the Algonquin Commons Theatre, and how this little known gem of a venue draws such amazing entertainment. If you’ve read my previous reviews, you’ll already know how I feel about the theatre, but I think, as I look into the fall semester, it’s worth a full post.

For those of you who haven’t been to this venue, simply put, it’s incredible! Despite the smaller-ish size, they are able to host amazing bands and entertainment acts throughout the year. The theatre has an intimate feel to it without a bad seat in the house. You don’t have to have floor seats in order to feel as though you’re part of the show. I have attended many of these acts, and have reviewed some of them. You can have a read if you’re interested here:

As you can see, simply by this small sample of previous shows, the quality of acts is outstanding. They are certainly big enough names to perform in some of Ottawa’s larger stadiums. The theatre offers seating for 700 people, but for many of the concerts, the floor level chairs are removed to increase capacity to 835. There are three levels in the theatre including the floor, main and a balcony levels. The sound and lighting equipment is state of the art and acoustics are as professional as it gets! Although used primarily by the Algonquin Student’s Association, the Algonquin Commons Theatre is its own business and not directly related to the school, however is staffed and ran through the Student’s Association. On event days, there’s typically a bar area and a merch table set up near the main doors. The bar offers a full selection of beer, wine and spirits, along with an array of non-alcoholic drinks.

While I was populating my event calendar for the fall, I noticed an incredible line up of acts coming in just this one season to the ACT! This was my inspiration to publish this post. Here is a list with links to the main acts hosted by the ACT:

September 4th – Sam Roberts (outside the Student’s Association building, NOT in the ACT) 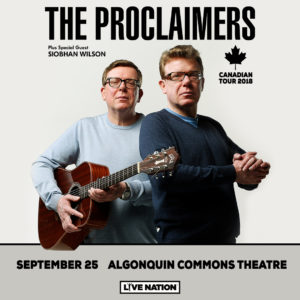 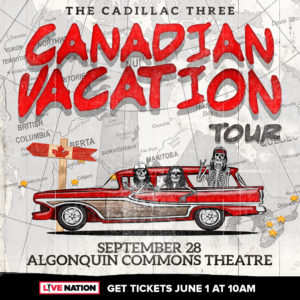 As mentioned, the Algonquin Commons Theatre is attached to the Algonquin College Student’s Association building, but it is not just for students. There are certainly benefits to be had with a student or Alumni ID, but other than a discount on the already reasonably priced tickets, the public is entitled to the same benefits of the shows. So if you’ve never been, this fall season is proving already to be a great line-up for the ACT, and I wouldn’t be surprised if there are more great shows added as time goes on.

Thanks for reading, and enjoy the shows!!