Last Thursday night marked the home opener for the Ottawa Redblacks, kicking off what fans hope to be a comeback season after falling short in last year’s playoffs, to repeat as the Grey Cup Champions. I decided to finally bite the bullet and get season tickets this year to support the team, and hopefully their continued success. Although also attending the pre-season game against Montreal, I felt it fitting to write about their first regular season match up to allow for readers to get a feeling for the experience. 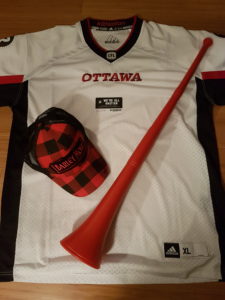 Like other posts, specifically the Ottawa Senators game experience, I won’t focus too much on the sport itself, but rather the experience that a fan would expect when attending the event. I do feel as though “event” is the right word, especially at the Redblacks game, as there is so much going on in and around the stadium, over and above the actual football being played on the field. This post is designed mostly for those of you who haven’t attended a game before so that you can know what to expect when you go for the first time. I bought my season’s tickets with my dad so that we could have some father/son bonding time, and to get both of us out of the house every couple of weeks during the summer. Well…maybe more to get him out of the house; if you’re a regular reader of my blog, you know that I’m already quite busy. ?

We decided to take the OC Transpo dedicated bus routes to the game, which are provided free to fans who are attending the game. It’s a pretty great service, and given the limited parking around TD Place, I would highly recommend taking the bus. For both of the two games this year, we’ve had no problems getting seats, and it’s been a pretty social and comfortable ride. The trip from Fallowfield station was about half an hour, getting us to the venue with lots of time to look around before taking our seats. Expecting huge crowds and lots of activities around TD Place, we planned to arrive early to enjoy the full experience. We got off the bus at the front entrance to Lansdowne Park, and although lots of people were out and about, there didn’t appear to be too much to do. Each of the restaurants in the area was absolutely packed, with massive line ups of people waiting to get in. We weren’t expecting to eat at any of these, so it wasn’t an issue for us, but others in line were clearly agitated about having to wait. My recommendation would be to go very, very early if you want to grab a bite before a game. 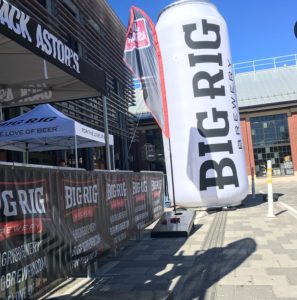 We wandered down to Jack Astors on the other side of the Aberdeen Pavilion, where Big Rig Brewery had a giant inflatable can up for promotion….who DOESN’T get drawn to this?? As expected, Jack Astors was at capacity too, but they had set up a temporary patio area utilizing the services of Ottawa’s newest fencing and crowd control company, ARX Fencing and Logistics to house the large group of people who were just there for a beer, and not interested in having a pre-game meal. Big Rig had two different selections available at $5.20 per tall boy, so quite a decent price considering the fact that everyone was heading into the stadium shortly, where you need to put a second mortgage on your house for a pint. We hung around there for a bit, then continued to wander. We stopped to listen to DJ Noah from Live 88.5 for a bit while he entertained a crowd, and then we played a football toss game where we embarrassingly missed the target each time. (Stupid little foam balls)

So, that was it….nothing else really to see or do outside of the stadium. It was quite disappointing, considering that it was the home opener, and we expected quite a bit more entertainment. We made our way into the stadium through a quick security and ticket scanning line. They have “no bag” lines that we took advantage of, but all seemed to be moving smoothly regardless. With about 15 minutes left before kick off, we went straight to our seats to watch the opening charge! Our seats are located in the upper half of the North side, right at centre field (yeah, yeah….North Side Sucks!!). Just an aside….we went to a late season home game last year, and the snow, rain and wind were so friggen’ cold (we were of course not dressed for it), that we decided the cover of the north side would be appreciated in the October/November games. The view from our seats is quite good: we can take in every corner of the field, but the sound is absolutely awful! We cannot make out the announcements at all from under the cover of the roof, it’s just one big blur of noise. We can see that the ref or announcer is talking, but have no clue as to what’s being said. With all the money put into renovating the stadium, you’d think some better speakers would have been installed for the north side too.

During the game, I took the opportunity to observe the non-sport activities and people watched for a bit. The thing that is so different between the Redblacks and Senators games, is that people are wandering around everywhere during the football game. During game play at the Sens games, the hallways are essentially a ghost town, with everyone sitting and watching the game. The Redblacks: not so much! It’s hard to tell if it’s a sell out because people are hanging around in the hallways and chatting and socializing. It really is a full event and social atmosphere, not just a sports match. We fell victim to that too, causing us to miss halftime, and most of the third quarter when we ran into a friend in the concourse. I therefore regrettably have to say that I can’t comment on the half time show which featured Elijah Woods.

There are plenty of food selections around the stadium, making it worth checking out both the North and South sides to find something delicious! The beer selection is a quite limited, unless you put in some effort and look around. On the upper deck of the North side, there’s only one booth with craft beer, so we frequent that cart when there. The south side has other options as well. Both the food and beer are typical stadium pricing, where the same cans that we had purchased pre-game for $5.20 each were $11.25 in the stadium. Oh well.

When seated, the fans are really into the game! The one announcement that can’t be missed is the now famous, sometimes annoying “Rrrrrrrrrrrrrrrrrrrrrrrrrrrrrrrrrrredblacks” for each successful first down by Ottawa. It gets the fans into the game and gives them another reason to cheer. Also, the fireworks with each touchdown are a nice addition too. With Ottawa destroying Saskatchewan on Thursday night (winning 40-17), there were plenty of first downs and touchdowns to be had. Although several Roughriders fans in attendance too, there was one in particular that I want to mention. About 5 rows up from us, there was an older guy all decked in in ‘rider’s gear. When Saskatchewan scored a touch down, he stood up, turned around and started pointing directly at Ottawa fans in a cocky and taunting fashion, specifically picking on a boy of no more than 12. Fortunately, that only happened twice, so when he snuck out with his head down in shame prior to the game end, there were plenty of cheers and jeers towards him. What a jerk!

After the game, we moved into the aisles and followed the ramps down to ground level like good little sheep. We made our way to the bus area and were back at Fallowfield station 30 minutes later. Attending a game is a really fun experience, and if you’ve never been, you should definitely go. There isn’t really a bad seat there, and if you don’t like your seat, you can move around, socialize and find other things to do. With a seating capacity in the mid 20,000’s, you’re also sure to bump into someone you know and chat through halftime. Hope to see you at the next game!