Orpheus Musical Theatre’s latest production, Mamma Mia! started this Friday night at Centrepointe Theatres. I was one of the lucky ones who was able to get out and see it on opening night. This performance was absolutely fantastic!! I have to say it’s not only my favourite Orpheus production that I’ve ever seen, but quite possibly my favourite theatrical production since starting up Covert Ottawa Guy! It consisted of an amazing combination of extremely talented performers, high quality costumes and set design, brilliant music, and most importantly, the story was riveting and hilarious! Even before the performers hit the stage, the crowd was grooving in their seats to the opening music and didn’t take their eyes off the stage for the full show. There was clapping, laughing and cheers through the entire performance! I always try and provide an honest, unbiased review with critiques where appropriate, but I found nothing lacking in this performance, it was first class all the way! 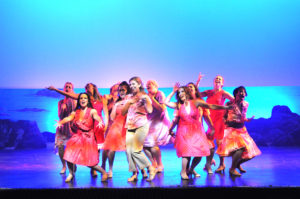 Centrepointe theatres once again proved to be a perfect set up for this performance, with great accessibility, high quality equipment, and a very versatile theatre layout to accommodate the creativity that gets put into shows. The staff are really friendly and helpful, and everything just runs smoothly there! The size of the main theatre at Centrepointe is respectable with seating for 731 in the Orchestra, and another 224 in the balcony. I do feel as though this particular performance could probably sell out a capacity almost double what this theatre holds. Orpheus truly has gone above and beyond with Mamma Mia! and has set the bar possibly too high for future performances! You can find my reviews for previous Orpheus shows of Shrek and Grease on my website.

For my reviews, I like to talk about what I call “The Standout Performances.” I make it a point during each show to watch each and every character individually, ensemble included, so that I can acknowledge the efforts of those performers that truly stand out. Typically, these performances come from supporting characters, and I pride myself on my ability to look past the lead characters’ stage time and recognize some of the smaller roles. However, in this show, I have to give credit where credit is due, and most of my selections come from leads. 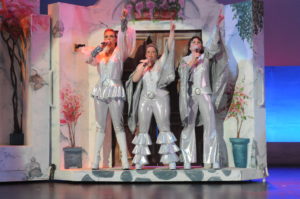 First, Nicole Milne, in the role of Donna. There are not even words to describe the talent here. I was blown away with her performance from her first song. Milne is one of those actors that has it all. She has stage presence. She has charisma. She can dance. And she can SING! I mean, really REALLY sing. I have seen this show before, both live and on film, and this was the best representation of the character of Donna that I have seen. She brought a depth and a realness to this character that I hadn’t seen before. Yep, you read that right: Milne was BETTER than Meryl Streep. I actually found myself getting quite emotional during her songs, “Slipping Through My Fingers,” and “The Winner Takes it All.” Milne MADE this show, in my opinion. What a truly incredible talent. I have noted before actors whose name alone could draw me to another show, and Milne tops that list. 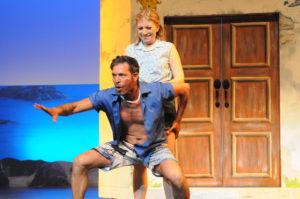 Next up is Meaghan Chapin in the role of Sophie. I saw Chapin in both Shrek and Grease with Orpheus this season, and as I noted in my Grease review, I was curious as to why she hadn’t been cast in a lead role in either of those, as she lights up the stage and is exceptionally talented. I was thrilled to see that she was playing the lead role in Mamma Mia! I heard others around me noting that this part had been very well cast, and I couldn’t agree more! Chapin sang and danced into the audience’s hearts again in this show. She has a distinct, sweet voice that was perfect for this part. And I didn’t realize that she was such a strong dancer, but she really nailed all of the choreography will flair and fun. Chapin really brought life to this show and dazzled in each and every scene. I truly hope that she sticks with Orpheus and that we see her in many shows to come! 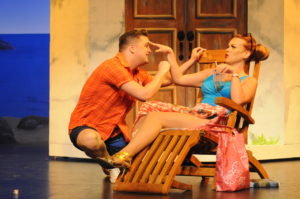 In supporting roles, Stefania Wheelhouse as Tanya and Pierre Sirois as Pepper really captured my attention. This two proved, scene after scene, that they have the comedic timing, the voices, and the dance skills to wow an audience. I loved these two as these characters…each was very good on their own, but together, they were pure gold. I particularly loved the number, “Does Your Mother Know.” Incredible! 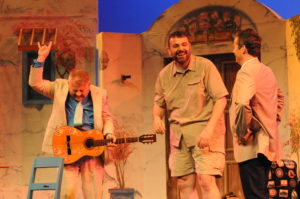 Other notable performances for me were: Derek Eyamie as Sky, who is an incredible dancer and who really stole the stage during his scenes, Christine Moran as Rosie, who has a beautiful voice and was hilarious on stage, and Rejean Dinelle-Mayer, who, with a great voice and endless charm, portrayed the role of Harry so well. It should be noted that the entire cast was phenomenal. It’s hard in a show like this, where there are SO MANY standout performances, to choose only a few! The orchestra for this show, under the direction of Chris Santillan, really raised the bar for live musical performances. They were flawless throughout the entire show, with incredible energy that was palpable from the seats. Very impressive. The hair and makeup team nailed it again with this show! Under the direction of Kim Shields, with a group of talented volunteers helping to make her vision a reality, the looks for this show were a perfect fit! 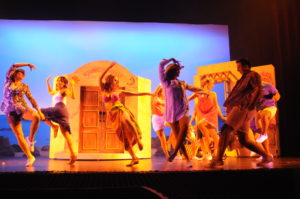 The choreography for this show was really great. I have to admit that sometimes, the choreography in a show can ruin it for me, typically because it is overly complicated, or just excessive in general. However, Susie Bregg-Krzyzanowski, lead choreographer, and Deborah Quaicoe, assistant choreographer, used common dance moves, perfectly suited to the era of these songs, and it worked SO WELL! I loved that it wasn’t overly complicated, and it really allowed for the actors to let their voices shine while they danced. It isn’t often that choreography gets a mention in my reviews, but I have to note it here, as I loved it so much. 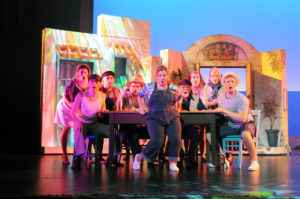 Costume designers Susan Cole and Linda Sabourin also deserve special mention, as the costumes in this show were spectacular. I loved the colour schemes, the designs, and the creativity that went into creating the looks. There are some pretty amazing costumes here!

Mamma Mia! runs from June 1st to June 10th, and I highly recommend buying your tickets FAST. I expect each show to sell out as it’s just a perfect mix of fun, talent, and pure entertainment! You can find the full list of dates and times on my event calendar and you can buy your tickets here!

Orpheus’ next performance is “The Last Five Years” in September, and then “Chitty Chitty Bang Bang” at Centrepointe Theatres in November.

All photos provided by Orpheus Musical Theatre and are taken by Alan Dean Photography.