This week’s event review takes me back to Centrepointe Theatres, one of the greatest places in Ottawa to catch live entertainment. Friday night offered a very unique experience that I was fortunate to be able to take in: an Ottawa Pops Orchestra presentation of “Harry’s Musical world”. The description of this performance is:

“Join the Ottawa Pops Orchestra on a magical journey through the Musical World of Harry Potter. This immersive concert and light show features music from all 8 movies by John Williams, Patrick Doyle, Nicholas Hooper, and Alexandre Desplat. Enjoy two nights of this concert which is not to be missed by any witch, wizard, or muggle. Come in your finest dress robes or house colours and prepare to be spellbound as the music comes to life.”

Knowing only this, I wasn’t really sure what type of performance I was in for, so in order to prepare myself to be at least somewhat educated on Harry Potter, I decided to attempt to binge watch the movies for the first time. As usual, my week was busy and I only made it through the first two, so I knew going into this event that I may be unprepared. I was pleasantly surprised, however, as this performance is strictly an orchestra playing the music from all of the movies, so a knowledge of Harry Potter is not necessary (although it helps one to appreciate the epic-ness of the songs performed during the show!)

The performance took place in the main theatre at Centrepointe, and it was full!! I couldn’t see the balcony from where I was sitting, but the main orchestra seating area appeared to be sold out. The really fun part is that there were many people dressed up in Harry Potter garb! This was encouraged in the promotions for the event, and it was great to see that people did get into the Wizard spirit and dress up! I was impressed that I can now recognize that, too!! 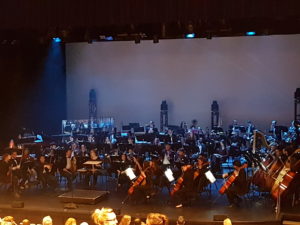 On to the review…. This is somewhat of a mixed review, but I will begin by saying that I really enjoyed the music, it was incredible. I studied music for several years growing up, and although far from being an expert, I can certainly recognize the basics when listening to/seeing a live orchestra perform. I estimate that there were about 60 people in the orchestra, and what a variety of instruments! There was actually one that I had to look up to determine what it was (Double Bassoon (Contrabassoon)). Like I said, the music was phenomenal. Under the direction of Trevor Wilson, the talented musicians were able to play two hours (with an intermission) of incredible music from the Harry Potter soundtracks. 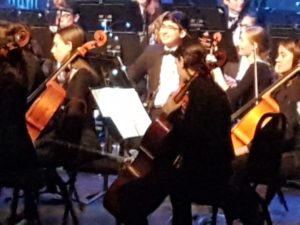 One particular musician really stood out for me so I wanted to give a little shout out. He seemed to be working really hard: focused yet having fun with the music. Although names are in the back of the program, I’m not 100 percent sure who it was. He was playing the Viola, brown hair and glasses. He truly seemed passionate about his playing, and that really makes all the difference when hearing live concerts! 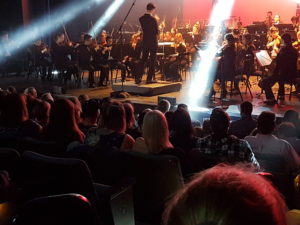 Now, in the official write up, there’s a reference to a “light show”. Again, I wasn’t really sure what to expect with this, and was hoping for a supporting form of entertainment running in parallel with the music. That wasn’t exactly the case. Instead of entertainment, the lights served as more of distraction and an annoyance. The light show was simply high-end lights that you’d find at any major concert/music event, but the only difference is that they didn’t appear to really go along with the music that was being played. Additionally, they were incredibly bright, which was terribly distracting. There were a few occasions where I saw people shielding their eyes when the light stopped on them, unable to pay attention to the orchestra. 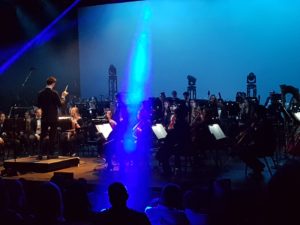 I, myself experienced a few instances where I was following the light and then looking away when it moved on to my section of the audience. In this picture, you can see the bright blue light focused on the crowd. I half expected to see William Shatner suddenly materialize (or Patrick Stewart for you Gen Xer’s). At minimum, the audience member should have been sucked up into the UFO. The distraction caused by the lights took away from the very talented orchestra and almost ruined the show for me. 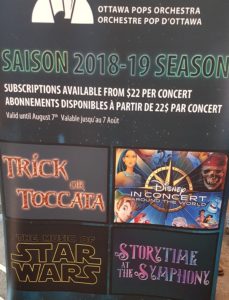 I am admittedly not experienced with Harry Potter, and was therefore unable to recognize songs from the movies and can accept that the music was not as appreciated by me as it might be for serious fans of the franchise. There were lots of these fans in the crowd, and as I was exiting the seating area, I overheard many of these costumed fans commenting on how great the performance was. I got to thinking about that, and I pictured myself in a similar performance for a topic that I was very familiar with and loved: STAR WARS!!! I realized that if this was all Star Wars music, I could probably have overlooked the ridiculous lighting issues, so I’ll give it a pass for now. ? Speaking of Star Wars, I did see that the Ottawa Pops Orchestra has a Star Wars performance in the planning in the near future! I will definitely be checking that out!

Harry’s Musical World has two more shows this weekend: one on Saturday night, and then a Sunday matinee. If you enjoy the orchestra, and listening to extremely talented musicians, then you will most likely enjoy this performance. If you’re a Harry Potter fan as well….grab your scarf and don’t think twice, you’ll love this show!

Here are a few YouTube clips of Friday Night’s Performance:

Harry Potter and the Goblet of Fire – Foreign Visitors Arrive

Encore Song (I don’t know what it’s from, sorry)