I had the opportunity to attend Kraken Theatre’s production of “Cry-Baby” for opening night on Friday May 10th at The Gladstone Theatre. It was my first experience at The Gladstone, and it’s something I’ve wanted to take in for some time. I’m happy to say that I loved my experience, and hope to go back for another show in the near future! As with most of my reviews, I’m going to focus this on the experience of the attendee, and not the “behind the scenes” views that you can find on main stream media. 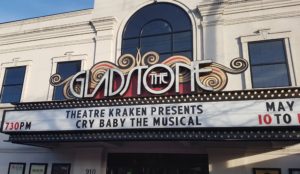 Since is my first review for an event at The Gladstone Theatre, I’ll talk about the venue a little bit first. The Gladstone really is a treat, I was really impressed with the service and the atmosphere of this little theatre. For all my years living in Ottawa, I have no idea why I’ve never made it out to such a great venue. If you haven’t seen it, the outside is right out of the movies and has an old fashioned broadway-esque feel, with bright lights surrounding the black on white sign showcasing the title of the performance. Once you go into the main lobby, you’re greeted by friendly staff, ready to help out with whatever you need. The layout is functional with the bar right in the middle, flanked by the coat check and the merch table. The entrance to the theatre is on either side and people get funneled through about ten minutes prior to the start of the show. Drinks at the bar were a great treat, with a good variety of local craft beer, wines and spirits, all at reasonably prices. Even better, unlike some other theatres, you can bring your drinks into the event, so you don’t have to chug your drink thirty seconds before the intermission ends. My one complaint is that he main lounge/lobby area is quite small, and if you’re arriving within 15-20 minutes of the start of a performance, you’ll find it quite crowded and difficult to get to where you need to be. Additionally, I would suggest you give yourself a few extra minutes to find parking. There is a small lot next to the Theatre, but it was full. We walked about five blocks from our car to get to the theatre.

Given that this is my first visit to the theatre, I’m basing my comments solely on this experience, so it may change from one show to another. As Cry-Baby was a musical, there was the obvious requirement for musicians, and they were set up on one side of the stage, allowing the majority of the stage area for the actual performance. I think this was great, it’s unusual, but great to actually see the band playing the music during the performance, as opposed to hidden in a pit in front of the stage or behind a curtain. It really adds to the overall enjoyment of the show. The lighting in the theatre was excellent, which allowed for seamless set changes in relative darkness while a different scene was playing out simultaneously. Although I don’t know the exact capacity, I’m estimating it to be about 200 people, so it’s a good-sized crowd when full.

Now on to the show! I am finding it hard to put into words how amazing this show is. And I guess I can sum it up with “You really need to go and see it!” From start to end, I was blown away by the musicians and the talented cast of this show. As the show was starting, the live band on stage played upbeat, lively intro music, which also carried hilarious messages in the lyrics, such as, “take your seats,” and “turn off your cell phone.” This really got the audience laughing and warmed them up for the show.

As with all of my theatre reviews, I don’t want to divulge too much of the storyline. I myself went into the show this evening not knowing much of the storyline. This made for many pleasant surprises throughout the show. With that in mind, I will simply say that it is a classic “bad boy meets good girl” storyline and will speak instead to the individual performances.

To start, I have to talk about the performance of Wade ‘Cry-Baby’ Walker, played by Nicholas Dave Amott. I don’t mention his performance because he played the lead character, in fact, I pride myself on being able to recognize incredible talent from the leads to the ensemble, but Amott ROCKED it. His voice is incredible. He truly steals the stage and the show with each number. Amott commands the audience like a seasoned professional, and it really seems as if he was born to perform. Astounding vocals aside, he was one of the best dancers in the show and has so much charisma. He really WAS the character of Cry-Baby, and it was pure magic to see.

Speaking of scene stealers and BECOMING one’s character, I was blown away by the performance of Samantha De Benedet as Lenora Frigid. I immediately recognized her sweet voice from having seen her in Orpheus’ recent production of Grease (you can read that review here), and while she really knocked the character of Marty out of the park, this was really something else. De Benedet had me (and the entire audience!) in stitches in every single scene that she was in. Never once dropping the crazy character of Lenora, her actions, her dance moves, the way she walked and interacted with other characters, were HILARIOUS! I found myself looking forward to each scene that she was in, just waiting to find out what Lenora would do next. Although the writing of the character is obviously very clever, I firmly believe that it takes a very strong, talented actor to be able to pull of a character like this, and De Benedet nailed it.

In other unexpected showstopping performances was Christine Drew in the role of Mrs. Vernon-Williams. It’s not every day that a supporting character has such an effect on an audience. While her comedic timing throughout the show was perfect, what really wowed me was her moving performance of the song, “I Did Something Wrong…Once.” During this song, you could have heard a pin drop, as the audience was enraptured by her passionate performance. She turned a character that could have been disliked into one of the most relatable, likeable characters in the show. Having seen her in this show, I would go and see Drew in anything that she is in.

If your favourite thing about a show is that supporting character who comes out of nowhere with a beautiful voice, captivating everyone in the room, then look no further than Axandre Lemours in the role of Dupree W. Dupree. I could write paragraphs about how incredible this guy’s voice is, but that might get a bit weird. But I just can’t believe this guy doesn’t have his own album already. He’s another one whose name alone on a program could get me in to see a show. Wow. Blown away. I hope that he never stops singing, because that is a true gift.

Other memorable performances from the show include Emma Woodside as Allison Vernon-Williams, who seems to embody the triple threat of vocals, dance, and acting ability. Abbey Flockton as Pepper Walker was a lot of fun to watch; it’s a really funny character, and Flockton has a great voice. Finally, the Whiffles were a real treat, keeping the humour going from scene to scene.

This show has simplistic sets, which really made sense, given that they were overshadowed by the talent on stage. Nevertheless, they were very appropriate and set the stage nicely for each scene. The costuming was great, it really gave each character a personality, and it is clear that they were the work of a very talented individual (Maureen Russell designed them, as per the program!)

The show is recommended as being appropriate for ages 12 and up. I would agree that it is a show that is more appropriate for an older audience, and maybe go as far as to say that it may be best for ages 14 and up. The show is so funny, but a lot of the humour is intended for an adult crowd.

I highly recommend getting out and seeing this show, and you’ve got over a week to do it! There are performances until May 19th and tickets are very reasonably priced between $23 and $39 so there’s no excuse not to see it!