Cityfolk Line Up is Released!!! 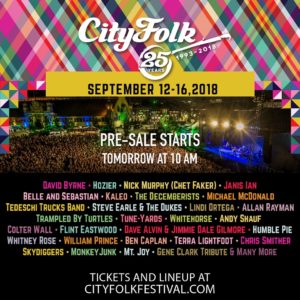 This year’s event marks 25 years since CityFolk’s original incarnation—the Ottawa Folk Festival—was launched. CityFolk will recognize the milestone by working with past stakeholders, volunteers and board members to showcase classic photos from days gone by, along with other memorabilia and conversations that chronicle the rich history of the Ottawa Folk Festival. Performances by past Folk Fest alumni will also be featured.

“We’re confident that this year’s line-up will create quite a buzz among Ottawa music fans,” says CityFolk’s executive and artistic director Mark Monahan. “Several of the acts we were able to book—such as David Byrne—have been on our wish list for quite a few years.”

The anniversary celebration will also include Marvest—a harvest of terrific local talent, including many Ottawa acts that have performed at the Ottawa Folk Festival in past years. Marvest takes place in Bank Street area venues and is free of charge. Performers, places, and times will be announced once that program is confirmed.

A special, limited pre-sale offer with discounted prices starts at 10 a.m. on Thursday, May 24. The regular ‘on-sale’ begins at noon Friday, May 25 when all levels of tickets are up for grabs, including single- and multiple-day tickets. For more details and updates regarding pre-sale and regular ticket availability, go to:www.cityfolkfestival.com.

This year’s CityFolk runs for five days, from Wednesday, September 12 through Sunday, September 16. The festival site is licensed and offers a wide variety of food, beverages, and merchandise concessions.  Check out the CityFolk website for more to come in the weeks ahead.