Bond……James Bond! Who doesn’t love this classic espionage series featuring the world’s most popular spy?! He’s been depicted by many different actors including Roger Moore, Pierce Brosnan, Sean Connery and most recently, Daniel Craig. Throughout his reign, 007 is still able to draw a plethora of fans, new and seasoned alike. This week’s rendition of the classic Bond is held in an English opera style and is running Thursday to Saturday at Centrepointe Theatres. 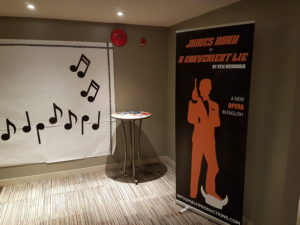 Centrepointe Theatres has once again proven to be an incredible experience. Everyone has heard of it, and it’s best recognized for it’s library, but the theatres are so impressive. Each time I go there for a show, I find myself with a renewed sense of pride knowing that such a fantastic theatre brings in such entertainment. This time, for James Bond, I saw the smaller Studio Theatre for the first time. It’s a cozy set up and hosts an intimate show, allowing audiences to feel as though they’re right in the performance. You won’t find the glamour of the National Arts Centre, but the talent and quality entertainment remain. With free parking and a central location only minutes from the highway, there’s no reason not to take in a show there!

Before getting into the details of the show, I have to preface this review with the fact that not only do I know little to nothing about opera; I don’t particularly care for it either. However, with that being said, I absolutely loved this show! I’ll be the first to admit that I was skeptical about seeing this performance, simply because of the opera aspect of it, but it was so fun! I think it’s important to paint a picture of what you should expect when you go see it (buy tickets, it’s worth it!!!) I think that if you were to break down this production into its basic ingredients, you’d have 1/3 Pavarotti, 1/3 Spy Novel, and 1/3 Weird Al Yankovic styling (purely for the hilarity and cleverness of using familiar songs, but with much funnier lyrics. The singers themselves are much more talented than Weird Al!) The songs through this performance are sung to the tune of famous opera songs, that even the unseasoned listener would recognize to some degree. However, the words are all changed to fit the storyline of this James Bond tale, often in a humorous way. The lyrics are incredibly clever, and many of the songs are completely hilarious.

The set design was as simple as they come: a black solid background with a grand piano in the corner and a percussionist set up to the side of the floor. The props were minimal and purposely created to be intentionally fake (brightly coloured plastic weapons). The sound effects were hilarious, all done by the percussionist, masterfully timed with the actions of the show, with a collection of noise makers and a few drums, graciously provided by Long and McQuaid. I feel as though the simplicity of the set really allowed for the talents of the performers to shine through. 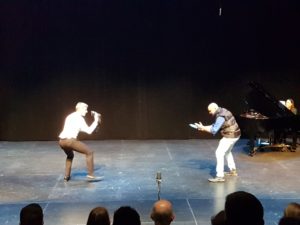 The entire cast was excellent! James Bond was played by Kyle McDonald, who is also the creator and director of the show, and he was brilliant. His physical presence on the stage and his demeanor fit the James Bond character perfectly. I suppose the tuxedo helped, but he played the character like he’s been a fan all his life. As I stated, the whole cast was great, but special recognition should go to two performers that really stood out for me: Diego Catala, who plays The Naturalist, and Holly Chaplin who plays Miss Bliss. They both had moments of singing brilliance that wowed the entire audience, including those who are unfamiliar with opera. I also really enjoyed the classic Bond character of Q, played by Sean Catheroy. Although he had fewer singing parts than the rest of the cast, his character was really funny, and true to form for typical Q. 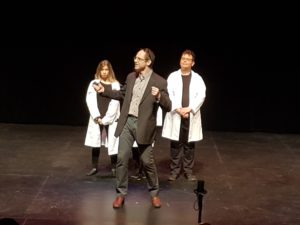 I would be amiss if I failed to mention the incredible ensemble. In addition to singing beautifully, they also played a key role in the creation of the set. The use of the ensemble to actually BECOME the scenery in multiple scenes was very clever, and was something that I hadn’t ever seen before. This was actually one of my favourite elements of the show. Because this concept is new to me, there were a few moments that I didn’t quite understand initially, but they were quickly made clear with the use of sound effects and quality acting. Without giving away too much of the plot, I was really impressed with the idea of using members of the ensemble to create the surroundings in the car chase scene! See the car chase scene video here! 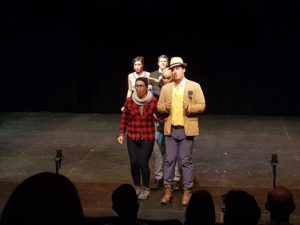 I think that it’s worth re-emphasizing that although it’s an opera, this is NOT your typical opera. Although the quality of singing is no doubt sufficient to satisfy an opera aficionado, I believe that the audience members who listened to the words, and watched the comedy play out enjoyed it equally, if not more. The entertainment value cannot be overstated, it is really funny and entertaining from start to finish. The word “fun” came to mind many times while watching this performance, in that every scene had me smiling and waiting to see what would happen next. The play was full of humour, suspense, and epic fights scenes, like any good James Bond story would have. I was really impressed with the fight scene choreography, they were performed so well, especially with the added sound effects. Here’s an example of one of several fight scenes.

Of course, no show is possible without the hard work of many talented people behind the scenes. In particular, I would like to acknowledge the efforts of Producer Noor Sunba, Lighting Designer Samantha Lewis, Fight Coordinator Todd Campbell, and Hair and Makeup Artists Jillian Turman and Laura Busby.

I didn’t know what to expect going into this show, but I’m so glad that I went. What makes this show so incredible and unique is the simplicity in it’s design, combined with an unbelievable level of creativity in content. The ingenious use of people, props and sound effects to create the atmosphere was fantastic, and it kept the audience grinning at the edge of their seat the whole time. The show exceeded my expectations in every way. The total running time of the show was only two hours, including the 15-minute intermission. I highly encourage you to buy a ticket and enjoy a great night out at this show this weekend! Full event listings for James Bond: A Convenient Lie, are available on my events calendar. Tickets can be purchased through the Centrepointe Box Office here!