Monday night, a true Hip Hop legend played at the Algonquin Commons Theatre, adding to the long list of incredible shows that they have featured over the past couple years. Nelly, on his first trip to Ottawa since Bluesfest 2016, demonstrated exactly why he’s able to sell out venues wherever he goes. His fan base extends back at least twenty years, when he started releasing the timeless hits that we all know and love. Seeing Nelly for the first time makes one repeatedly say “Oh yeah!!…I LOVE this song too.” 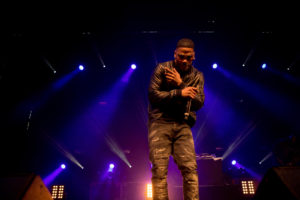 As I’ve mentioned in previous concert reviews from the Algonquin Commons Theatre, the facility is state of the art, and in my opinion, one of the best places in Ottawa to take in a concert. The venue appears small initially, but is spacious within, and this, paired with excellent acoustics and high-quality sound and light systems, provides for an intimate feel to concerts, and makes for a perfect venue. Capacity is somewhere around 700 people inside the theatre, and for most shows, it’s full. If you’ve never been, keep an eye out for future performances (you can find them on my website), you won’t be disappointed. One thing that I really appreciate about the Commons is that there’s no drinking (other than water) permitted inside. There’s typically a bar set up in the main lobby for drinks prior to the show and during intermission(s), but it keeps it cleaner and more mature for the most part during the concert. The bar in the lobby offers stand up tables and some couches to relax and mingle with your friends. Drinks are reasonably priced, unlike many event spaces, and entry is pretty straight forward. The whole process of getting to the event, checking in and finding seats is seamless, as it’s run by the experienced and friendly staff from Algonquin College. Security was well represented for the Nelly show, with the Algonquin Commons security team being supplemented by Toersa Security, who are experts at concert security. I’m happy to say that from where I stood during the show, there were no incidents, as all of the fans were just happy to see the concert and loving the friendly atmosphere. 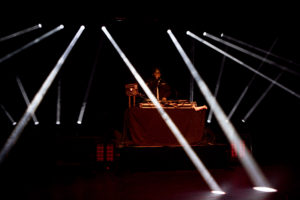 The concert on Monday started at about 8:00pm, with two opening acts prior to Nelly taking the stage. After sleeping on this review, and considering what my mother used to say: “If you can’t say something nice…..” well, I’ve decided not to comment on the two opening acts. Once 9pm hit, though, Nelly was true to form, and absolutely phenomenal. The now 43 year old kicked it off with a quick DJ mix of Hip Hop favorites, leading into arguably one of his top songs, E.I. It got the crowd hyped immediately, and they never lost this enthusiasm throughout the show. Nelly continued with some of the classics that everyone knows and loves, with only minor breaks for some crowd interaction. From what I can tell, he performed all of his hits including Air Force Ones, Country Grammar, Ride wit Me, Batter Up, Hot in Herre, and Dilemma (with a recorded Kelly Rowland).

Nelly’s show is a great mix of performance and crowd interaction. He’s known to have fans on stage at some concerts, and he makes a real effort to shake hands/high 5 the people in the front row. Unlike his performance at Bluesfest, he didn’t bring audience members on stage at this particular show, but he definitely showed his appreciation to the fans throughout the concert. At one point in his performance, he borrowed a cell phone from an audience member, and recorded a little video for her from stage level. For a true fan, that’s a souvenir that you just can’t put a price on! 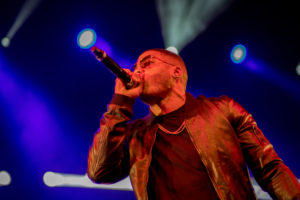 After finishing most of his classics in the first half of the concert, he gave the audience a taste of some of the music from his new, yet to be released album, “All work No Play”. His new music hasn’t lost any of his touch from his past successes; the crowd loved every minute of it, singing along when prompted and dancing for the full show. 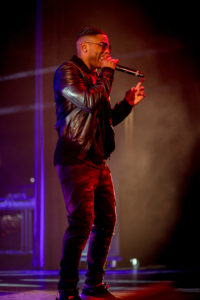 Although the concert was only slightly more than an hour, the energy and enthusiasm showed by both Nelly and the audience was impressive. The dancing and singing never subsided and it was truly an amazing show. Hopefully he’ll come back to Ottawa again in the near future. I’m sure it will once again draw a huge crowd of adoring fans. I know I’ll be there!

**All Photography is the work of Chaiton Photography. You can find the full collection of pictures here.