I, like many, grew up watching the movie Grease. I loved watching the students of Rydell High, getting a glimpse into high school life in 1959. So, when I heard that Orpheus Musical Theatre would be performing the stage production of Grease, I was very excited. I most recently saw Orpheus’ production of Shrek, and was blown away by the professional quality of the show. You can check out my review of Shrek here!

Grease the musical is different than Grease the movie in some aspects: there are a few different songs, and some classic songs from the movie do not appear in the stage show at all. However, it appears as though Orpheus got the rights to add a few of the better-known songs from the film to their production, which was great. For those of you who haven’t seen either, Grease is the story of a group of high school kids during their senior year in the late 1950’s, dealing with all of the typical teenage issues. It also has a romantic storyline, following the ups and downs of Greaser Danny Zuko and the innocent Sandy Dumbrowski. I was eager to see Orpheus’ take on this classic and iconic story.

I was not disappointed. From the start, Grease was phenomenal. Orpheus cast a number of talented individuals in this show. Sandy, played by Tanya Guimond, whom you may recognize from the Shrek ensemble, has an absolutely beautiful voice, perfect for the character. Her tone and pitch throughout the show was flawless. Danny, played by Andy Allen-McCarthy, was similarly talented vocally, with a great vocal range and the ability to command the entire audience with just his voice. These two were a great pair on stage. 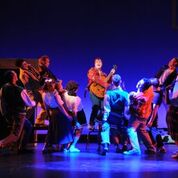 In female supporting roles, the Pink Ladies were a joy to watch, with many, many funny moments on stage. In particular, Gaelyn Skye Klein, as Frenchy, had incredible comedic timing, and was definitely a character that drew the eye of the audience. She stole the scene numerous times, not only with her perfect line delivery, but with her body language and facial expressions, and I heard the people around me whispering things like, “She’s so funny!” and “I love her!” throughout the entire show. All of the Pink Ladies were great, but she was REALLY great. Both Samantha DeBenedet (Marty) and Sarah Cousineau (Jan) had a lot of great moments as well, and I feel as though all of the women who played the Pink Ladies really did a great job in developing their characters. 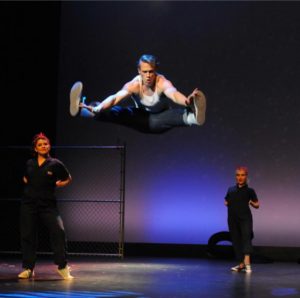 As for the male supporting roles, and the standout performance of the entire show, Connor McMahon KILLED IT as Kenickie. I could go on and on about how talented this guy is. Everything that he did in this show was absolute GOLD. His singing was flawless, his dancing was flawless, and his acting was the best in the entire show, in my opinion. Everything about him was Kenickie: the body language, the swagger, the facial expressions. Interestingly, Connor is one of the younger, less experienced cast members, but I was blown away by his performance. It is obvious that Connor has a very bright future ahead of him in theatre.

In the ensemble, Meaghan Chapin stood out to me. I recognized her from her role in Shrek, and she did a great job in the ensemble of this show. Meaghan is very funny and charismatic on stage, and is one of those actors that consistently makes you wonder why they are not in a lead role. However, I was glad to see her back, and she brightened the stage in each scene that she was in.

In terms of the theatre, Centrepointe Theatres, as usual, provides the perfect venue for this musical. The staff there are friendly, the seats are comfortable, and there doesn’t seem to be a bad seat in the house.

The show was backed by a live orchestra, directed by Ruth Kwan, who were flawless throughout the show. Live orchestras bring so much to musical theatre, and I am so glad that Orpheus uses one. 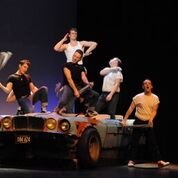 In regards to visual appeal, the stage seemed slightly minimalistic to me compared to some other shows, but this did not take away from the show itself. The set design was fantastic. I particularly loved the diner set. It really made the audience feel as though they were in a 50’s diner. The lighting, too, was perfect, really adding to the overall experience of the show. Another aspect that stood out to me was the makeup for this show. All of the actors looked amazing. The makeup team, led by the amazing Kim Shields, featured a number of talented makeup artists behind the scenes. I must also mention the director, Chantale Plante. It’s not easy to undertake such an iconic show, and she really did Grease justice! I know that often, when a show is really great, these aspects go unnoticed. But they deserve mention, as they are integral to creating the magic that is a live musical.

I really don’t have anything negative to say about this show. Orpheus’ shows are so professional and well put together, and it’s such a joy to see any of their performances! If I were to critique one thing, I would mention that there does seem to be quite a bit of overlap in who is cast in their shows. While I understand that it would be tempting to cast someone who they know already, I also recognize that there are a lot of very talented people in Ottawa, and that sometimes, taking a chance on an unknown, such as Connor McMahon, can pay off in a major way. I hope to see some new faces and talent in Mamma Mia!, June 1-10, 2018, at Centrepointe Theatres!