On Saturday, March 10th, I attended the St. Patrick’s Day party hosted by Beau’s Brewery at the Aberdeen Pavilion. This is the second major Beau’s event that I’ve attended, and wow- what an amazingly well-run event! It ran from noon until 10pm, with the stragglers leaving closer to 10:30. The demographic of the attendees was interesting to watch as the day progressed and the family atmosphere slowly morphed into an adult party zone. 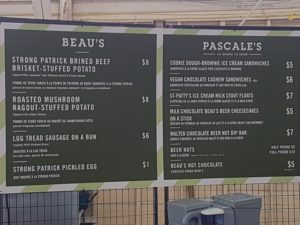 The layout of the Aberdeen Pavilion was brilliant. The main door on the west side of the building was the sole entranceway and attendees were greeted by smiling “volunbeers”, and welcoming security personnel from Toersa Security. First aid was on the right, coat check to the left, and the beer token vendor straight ahead. All of the basics were covered within the first 50 paces of entering. The stage was set up right in the middle of the building, flanked by picnic tables and further away, the beer stands. 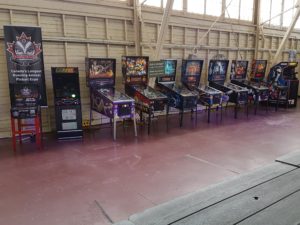 To the right of the stage (if you were facing it), there were more tables to sit at, as well as a fun display of pinball games sponsored by the upcoming Ottawa Pinball and Gameroom Show. In the far corner of the building, you could find a diverse array of foods, and finally, the bathrooms were at the opposite side of the building from the front door. 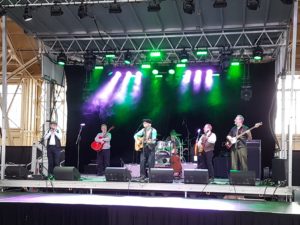 Entertainment was scheduled for the entire day. Unlike many single-stage events, there was no break in between bands, as many other performances and games were planned during the set up and tear down of the musician’s equipment. The most popular of these events seemed to be the Stein Hold Struggles, which were held twice throughout the day. First was the men’s event at about 2:30, followed by the women’s competition at 4:00. Each participant (about 15 in total), were to hold a large stein full of beer at arm’s length for as long as possible. The winner was simply the last man standing without spilling or faltering from the weight of the stein. The winning time was somewhere around 4 minutes and 30 seconds for the men. The women’s competition drew a huge crowd of people cheering them on, with a winning time just over three minutes. 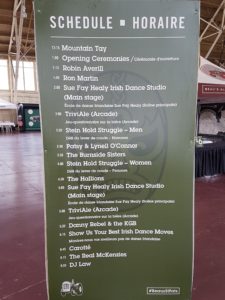 As mentioned, the crowd was entertaining to watch throughout the day. As the event progressed, the level of sobriety diminished with each passing hour. At the start of the event, there were many families, with the dance floor in front of the stage filled with children playing and enjoying the music. By the time 4:00pm hit, the family atmosphere had already started to change into a more adult oriented setting, with many families hitting the road for dinner. The unofficial change over point seemed to be when the DJ played Drop Kick Murphey’s “Shipping Up to Boston” much louder than the other music. The dance floor instantly filled with adults, effectively ending family time, but maintaining the high energy level. From this point on, the bands were a little louder, and a little cruder than the daytime shows. The party started!

The “headlining” acts hit the stage at about 5:30, starting with Danny Rebel & the KGB. Although not overly Irish, this band was amazing!! I hadn’t heard of them previously, but I spent the day before listening to their music, and I loved it, they were a true highlight of this event! The next band was Carotté who play a Franko-Irish rock music. They’re really entertaining and kept the dance floor full. Finally, closing the party on stage was The Real McKenzies, who are a Canadian Celtic punk band comparable to Drop Kick Murphey’s (I guess), but not quite as hard. They put on a great show. The dance floor was jammed with people, with a mosh pit running for the entire duration of the concert. No injuries, no fights….just pure fun!! Although I have to say that the image of the lead singer, Paul McKenzie (who’s in his 50s or 60s), mooning the audience by lifting his kilt is still burned to my retinas. No need to ask if he’s got anything on under that kilt! 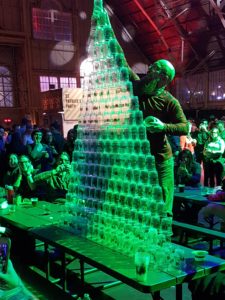 There were several thousand people during the peak of the party, and what a great crowd it was! Security was tight during all parts of the event, so the feeling of safety was always present. The crowd, although intoxicated were very exuberant and were having a great time. And, if for some reason the attendees weren’t enjoying the concerts, they were able to make their own fun with the games. The beer glass tower building game was especially popular. 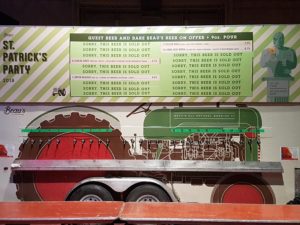 Beau’s puts on great parties. I feel as though I have an eye for detail, and generally have pretty decent observation skills. That, combined with my experience at events, on both sides of the stage, I can tell when an event is well run. Beau’s doesn’t miss anything! Every last detail is accounted for at their events: the layout, stock levels, signage, decor, access control, volunteers….everything is planned perfectly, which makes for very smooth events. It appears to have been a huge success considering the mood in the room where all the patrons were happy, with no noticeable complaints. Also, a true sign of success was the beer sales. It seems as though Beaus had very little to bring back home.

I don’t have a single negative comment to make about this St. Patrick’s Party. It was perfect. Absolutely do not miss this event next year, I know I’ll be there! 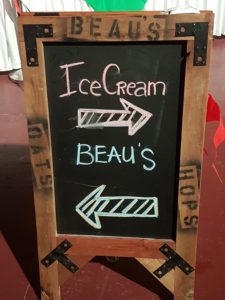