Ottawa Event Review: The Fan Experience of a Sens Game

I’d like to preface this review by explaining that while it is a review of the recent Ottawa Senators versus Boston Bruins game at the Canadian Tire Centre; it is not a review of the game itself, but rather of the overall experience of attending an NHL game. This off-ice review focuses on the overall enjoyment or entertainment value that a fan can expect when making the trek to the CT Centre for an Ottawa Senators game.

We arrived at about 7:00pm, 30 minutes prior to puck drop, and had no issues getting into the parking lot; the lineup to enter the lot area was efficient, and locating an empty spot in lot 9 (furthest from the door) was done with ease. The first thing that I noticed when I pulled in was that parking is now up to $20 per car. I remember the good old days when even valet was only $25 (not sure of the current price). We made our way to the arena through the sheltered walkway in the parking lot, which offers at least some reprieve from the weather, with a stream of other fans heading to the main doors. Arriving at the main entrance, we encountered a lineup outside of people waiting to get through the security check point. My last encounter with an NHL security check was at the outdoor winter game hosted at TD Place this past December. (Read my post on that security challenge here) This was a much better experience. Although the line looked daunting, we were through it and processed in under five minutes, with no issues or complaints. The experienced and capable security team moved everyone along very efficiently. Our seats were in the 200 level, and for those of you not familiar with the layout, the 200 and 300 levels share the main concourse, where you’ll find the majority of the goods and services offered in the stadium. With only about 15 minutes until puck drop, the crowds through the concourse were excited, both the Sens fans and the many Bruins fans. As is typical of Sens games, the visiting team drew a large crowd of fans who only get to see their team a few times each year. 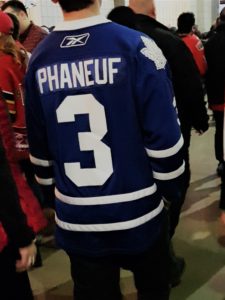 Whenever Toronto, Montreal, Boston and a few other teams visit, the “visiting” fans can often appear in greater numbers than the “home” fans. This game was certainly no exception, with Bruins fans everywhere! And, as expected, it doesn’t matter who the visiting team is, there’s always that one Leafs fan who wears their jersey (regardless of the current team of the player on the back). We made our way to our seats and awaited the national anthems.

Throughout the game, we left the seating area to take in some of the services and entertainment options throughout the arena. Over the years, there has been a lot added to create a more social atmosphere, and to get people out of the 2×3’ area in their seat. There is clearly an attempt to make the hockey games less about the game, and more about the overall experience. You can see this with the newly created Bell Section on the 100 level, and the Fan Zone on the main concourse. The fan zone includes a DJ, a large open bar area and social room, where fans can interact with one another. There is a ‘high-class’ feel inside the area, and it appears to be where the ‘movers-and-shakers’ spend their time during the game. It feels like a party, and is a really cool environment. Outside of the Fan Zone, throughout the main concourse, there isn’t really much to see and do. There are a few displays of cardboard player cutouts missing their faces, creating a photo op for fans, and a few displays by merchants selling their products, but nothing really for entertainment. 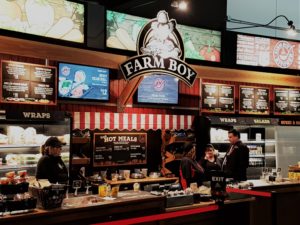 I’m always very satisfied with the wide variety of food and drinks available at games. Not too many years ago, the selection was limited to beer, pop, and hotdogs, the standard fare of any sports match. Today, the selection is almost limitless, and although you’re still paying inflated stadium prices, you can have a proper meal if you so choose to do so. At this game, I visited the concession booths only twice, first purchasing a 24oz Canadian and a bottle of water for $18, then later purchasing a “24oz Canadian and Nacho/cheese combo” (!!) for $20. To say that the prices are completely unreasonable is an understatement, but they are comparable to movie theatres and other similar venues. Sadly, the precedence has been set and we’ll just have to live with the prices. 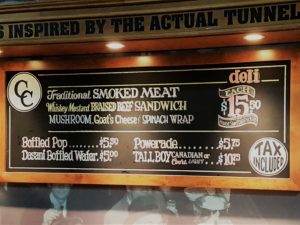 Intermissions between periods feature entertainment on the ice, from contests to random seat draws for prizes. Loud music is played, kids (and some adults!) dance, and if they are lucky, they are featured on the giant screen above the ice. This particular game had a young girl being spun around in a blindfold, who had to follow crowd cheering cues to try to find Sparty, the Sens mascot. It was fun and entertaining for the crowd to watch and to be able to participate. Each game is slightly different, but there are efforts to keep the crowd entertained during these breaks. 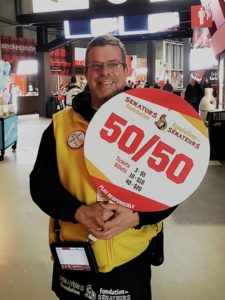 Fans numbers at Senators games has been dwindling this season, but a benefit to that is that the lines for bathrooms and drinks is also shortened. The 20 minute intermission is now more than sufficient time for a bathroom break, beer refill, hot dog purchase, and a short walk around the stadium. I love walking the concourse at games; it gives you the opportunity to interact not only with other fans, but with the hundreds of employees who are working at the stadium. The same folks work most games, and the staff turnover is low, as the employees feel a great sense of belonging and personal satisfaction in their jobs. I know several people who have worked at the arena for many years; this includes bartenders, ushers, 50/50 ticket sellers and security guards. Staff members are always very friendly and easy to talk to, which only enhances the game experience further for patron.

Game day transportation doesn’t have to break the bank- there are many options for transportation/parking. The parking lot is big enough for the stadium, and although some spots include a bit of a walk, there is always room. Additionally, OC Transpo offers special service throughout the city for all game and event dates. This is a pretty efficient service, and as a bonus, it drops you off and picks you up near the door. There are also dozens of bars/restaurants throughout the city that offer free or cheap shuttle service to and from games. For those of you who don’t mind some walking, there’s a little subdivision where you can street-park in the ever-expanding Stittsville, about 20 minutes from the stadium. Uber now has a dedicated drop off/pick up spot, or finally, why not splurge on valet parking available on the north side of the building? 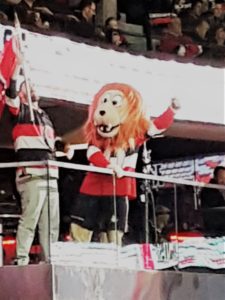 Overall, it was a very enjoyable night. Between the games and contests between periods and on breaks, the great music, and the interaction with other people at the game, particularly in the Fan Zone, there is a lot of entertainment value at each game. While I recognize that people are going there to watch a hockey game, and don’t necessarily need other forms of entertainment, I feel that these added features at games are important, especially now, as ticket sales continue to dwindle. These added features at games will help to draw people to Kanata, especially when the current on-ice product isn’t what it used to be. Decent tickets will cost about $100 for the medium range seating, parking was $20, drinks were $40 and I think we were being reasonably conservative with our spending; there are plenty of other things to spend your money on when at the game. So for a night out for two people, it’s easy to hit $300-$400 after everything is said and done.

Overall, I would recommend attending a Senators game in Ottawa. It’s a really great time, especially if you take the opportunity to get out of your seat and see everything that the arena has to offer.