Ottawa Event Review: If the Walls Could Talk Theatre Production

I had the pleasure last night of attending the world premiere/opening night performance of ‘If the Walls Could Talk,” in Osgoode. This show was presented by Around and About Rideau Theatre (www.aartheatre.com ), which is a volunteer-based, not-for-profit community theatre group based in Osgoode. The show itself was written, directed, and produced by Derek Meilleur, an incredibly energetic, driven man with a wealth of knowledge and skills that made this show an absolute delight to see. I love the idea of original works of theatre, where a talented writer deviates from the standard theatre concept, and this show did not disappoint. 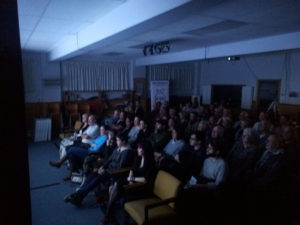 The venue for this performance was in the lower level of a church, but you’d never know it due to the professional and versatile set design and equipment. Chairs were in place for roughly 60 audience members located in front of the audio/video booth. Each seat gives a full view of the stage, with nothing missed in back rows or side seats. With two short intermissions, you can purchase refreshments from the canteen. I highly recommend the warmed up cinnamon pretzel from the sponsor, Mr. Pretzels. For $5, you can get this delicious treat and a drink. Speaking of sponsors, you may just recognize a Covert mask in the list of official sponsors. ?

The show featured a number of special and visual effects that are not usually found in community theatre. AART incorporated high tech lighting, sound effects, and video projected onto a screen to bring this story to life. The music that was used added so much to the show, I felt as if I had travelled back in time to the period that the first scene was set in. I was pleasantly surprised with the quality and detail of these effects. I feel as though to divulge much more here would spoil the surprises of the show for other viewers, so I will leave it at that, but I was very impressed with the creativity that went into the effects and the results they had on the show.

The storyline itself is hilarious. It follows two couples, one alive, and one dead, who find themselves living in the same house, and the antics that ensue as they try to get rid of one another. This romantic comedy had me smiling from the first scene, and laughing for most of the rest of the show. A host of other charming, funny characters had the audience in stitches, most notably, the priest and the medium. 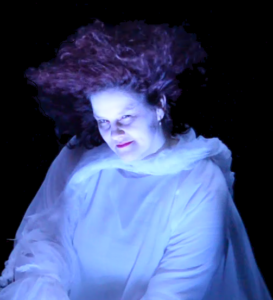 The dead couple was played by John Garroch, as the husband Jack, and Lisa Moore, as the wife Ethel. There was something unbelievably charming about these two as a couple. They had great on-stage chemistry and comedic timing together, and I really believed that they were an old-timey, loveable couple. It is obvious that they are both seasoned pros when it comes to theatre. Not a line was missed, not a cue late. I enjoyed their scenes immensely. These two were born for the stage, it seems, and played off of one another effortlessly. I was extremely impressed with both of them.

The live couple was played by Chad Wolfe as Sam, and Alison Latimer as Ashley. These two were also very believable as a young couple buying their first home, and dealing with the ‘problems’ that came with the house. There were a number of comedic scenes with these two, where they were blaming one another for the suspicious activities going on in the house. My favourite scene was the dinner scene, where, due to some interference, things did not go as planned. There were a number of laughing out loud moments watching these two.

A number of supporting characters rounded out the talented cast of the show, including Linda Thomas Fisher as Rebecca the realtor, Dirk Visbach as Doc the Coroner, Richard Fisher as Don the Police Officer, Liz (Kat) Szucs as Madame Zambika (or “Zamboni” as she was referred to on multiple occasions), the Medium and Alan Arbuckle as Father Murphy, the Priest. Each of these characters brought something special to the show. Making his acting debut, Richard Fisher brought a heartfelt, somber feel to a sad scene, making it hard to believe that it was his first time on the stage. Also, I have to give huge credit to the performance of Liz Szucs as the Medium. What an impressive and hilarious performance she gave! Clearly a seasoned professional as well, she brought levity and laughter to her scene, and the audience loved it.

There were a number of behind the scenes people who made this show run smoothly, and I have to give them credit. I can imagine that with as many special effects as they had, the show could not run without a number of people working hard off stage. I would particularly like to mention the impressive hair and makeup of the cast, which was the handiwork of professional makeup artist Laura Busby (www.laurabusby.ca). Laura creatively designed the makeup looks for the characters, and then brought her vision to life. The effects were remarkable.  Jack and Ethel, the dead couple, looked especially amazing.

As with any opening night performance, the show was not without any glitches. Due to cell phone interference, the sound came in and out on some of the microphones. Given that the cast had not had any issues with the mics in rehearsals, it is apparent that this was most likely the cause. The cast handled it well, though, and simply projected their voices when their mics faded out. The lines could still be heard perfectly. A truly professional cast. I would like to strongly suggest, however, that when you attend this show, that you switch your cellphone to airplane mode or simply turn it right off. 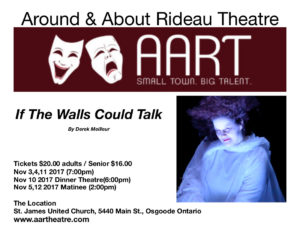 All in all, this show was amazing. I loved the unconventional approach to traditional theatre, and was completely enthralled with the storyline. After the show, the cast came out, giving an opportunity for audience members to mingle with them, and even get a photo with them if they wanted. I think that this was a great idea! You can really tell that this is a talented, passionate group (both cast and crew), who truly enjoy performing. And I cannot say enough about how awestruck I am with the director, Derek Meilleur, and how he brought this story to life. I would highly recommend that you check it out! You can purchase your tickets here: (http://aartheatre.com/shop/). The show runs this weekend and next weekend (with a dinner theatre option next weekend!) and it is really worth the short drive to Osgoode!