Today is apparently the day of announcements. I’m happy to report that this spring/summer will feature two more exciting events, both announced just this morning. 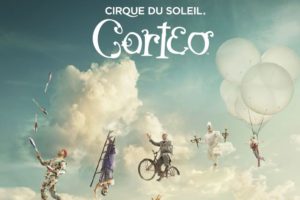 “After thrilling more than eight million people worldwide, Corteo will embark on a new journey next year as the same enchanting production but now visiting arenas across the world, giving more people the opportunity to enjoy a Cirque du Soleil show in their own town. The show will visit Ottawa and Richcraft Live at Canadian Tire Centre for a limited run of eight performances, from June 27 to July 1, 2018

Tickets can be purchased by visiting www.Ticketmaster.ca, www.canadiantirecentre.com, by phone at 1-877-788-FANS; in person at each of the 10 participating Canadian Tire stores in Ottawa as well as the store in Perth, The Sens Store at Carlingwood Mall, Place d’Orléans and in the ByWard Market, Algonquin College, Superior Photo and at the Canadian Tire Centre box office.

This unique production directed by Daniele Finzi Pasca premiered in Montreal in April 2005 and has visited 64 cities in 19 countries. Corteo, which means cortege in Italian, is a joyous procession, a festive parade imagined by a clown. The show brings together the passion of the actor with the grace and power of the acrobat to plunge the audience into a theatrical world of fun, comedy and spontaneity situated in a mysterious space between heaven and earth.

The clown pictures his own funeral taking place in a carnival atmosphere, watched over by quietly caring angels. Juxtaposing the large with the small, the ridiculous with the tragic and the magic of perfection with the charm of imperfection, the show highlights the strength and fragility of the clown, as well as his wisdom and kindness, to illustrate the portion of humanity that is within each of us. The music, by turns lyrical and playful, carries Corteo through a timeless celebration in which illusion teases reality.

The cast of Corteo includes 51 acrobats, musicians, singers and actors from all around the world.”

Second, TD Place will be hosting a one-night feature of Dirty Dancing LIVE!! This fantastic show will be on May 26th in the TD Place arena and tickets will go on sale this coming Friday, December 1st! 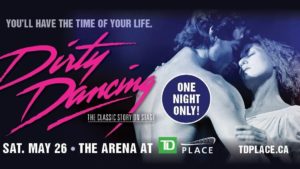 “Dirty Dancing – The Classic Story On Stage is an unprecedented live experience, exploding with heart-pounding music, passionate romance and sensational dancing. Seen by millions across the globe, this timeless love story features the hit songs “Hungry Eyes,” “Hey Baby,” “Do You Love Me?” and the heart-stopping “(I’ve Had) The Time Of My Life.” London’s Sunday Express says “This crowd-pleasing stage adaptation hits the jackpot!”

After three successful years on tour boasting numerous sold out engagements, this new adaptation of the worldwide smash-hit film, currently celebrating its 30th Anniversary, will continue to dazzle in more than 50 markets in North America, including Ottawa, at The Arena at TD Place for one night only on May 26th, 2018, promoted by TN Touring.