Today I had the opportunity to attend an amazing annual event that I have never attended before: Beau’s Oktoberfest. While a bit of a drive away, in beautiful Vankleek Hill, this event is absolutely worth the trip. And with buses traveling regularly between Ottawa and the site, dropping you off right at the gate, there really is no excuse not to attend. Hosted by Beau’s Brewery, this event impressed me in every aspect. 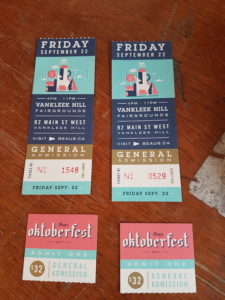 I was blown away by Oktoberfest from the moment I arrived. The gate entry process was seamless and efficient, with an incredibly friendly staff and free hats. I wore mine the entire night, obviously! ? The site itself is massive. There are two stages, flanked by rows of food and beer vendors, games, an arena with entertainment featuring the crowds, and even a skate ramp. I watched some of a beer keg tossing competition which was hilarious, to say the least. 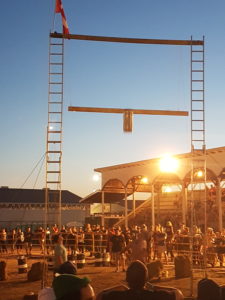 Trust me when I tell you that there was something for everyone. I saw people aged 5 to 75, and everyone looked as if they were having a great time. Many, many people chose to dress in the ‘Oktoberfest’ style, which was fun.

The two stages offered a variety of musical styles, with everything from French rock music to hip hop. I was able to see three separate musical acts: I.D.A.L.G. and Rheostatics on the main stage, and Flight Distance on the Black Forest Stage, and really enjoyed all of them. The skate ramp was in front of the Black Forest stage, which allowed for people to watch both the show and the skateboarders, which was awesome.

The midway offered games which were fun and entertaining for patrons of all ages. There was also a Ferris Wheel that offered not only an enjoyable ride, but a spectacular view of the grounds and all that the festival had to offer, so obviously I had to go for a little spin BEFORE sampling the beer. There was also a booth featuring a home brew competitions where people brought in their home made beers with the winner getting their submission brewed by Beaus! 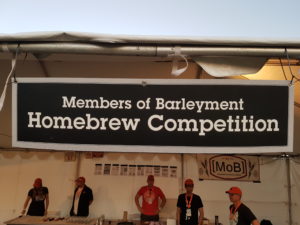 Both security (Toersa) and the police (OPP) were on site, ensuring the safety of all of the attendees, which was great to see. Security was friendly and helpful, providing directions and assistance, and also directing traffic to ensure that everything was running safely and smoothly.

On-site camping was offered for those who were interested, which is a great option for anyone taking in both days of the festival with a weekend pass.

I’ll review the food and beer separately, but I have to mention that the highlight of my night was the Vegan taco from the Bowman’s Bar and Grill vendor. It was incredible. I’m not a vegan, but wow, was that taco good!

When one thinks of Oktoberfest, the first thoughts that comes to mind are beer and delicious food. It’s not Oktoberfest without good beer and some bratwurst sausages, and since Beau’s Brewery is the host and main sponsor of Oktoberfest, they managed the beer to perfection. When I first walked into the event, it took me several minutes to locate the nearest beer seller. Once turning to the left, I found the path to the beer garden across from the main stage. 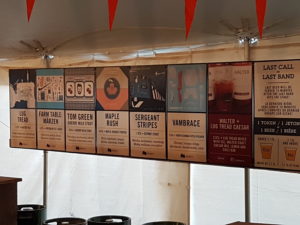 I was excited to find six different beer offered at the first stop in that beer tent.  After taking the picture of the sign with the delicious offerings, I saw the second stop with another 4-5 different options, and then the third with ciders and other choices. I was impressed with the first six so my interest was piqued when finding 12-15 different choices in one spot. 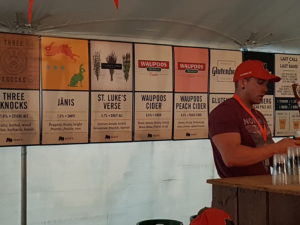 I started with the Farm Table: Marzen and really enjoyed it. It was a delightful little amber beer that was easy to drink and very refreshing. While enjoying it, I started walking around and visiting the area around the stage, where I quickly realized that there were more beer offerings in a tent set up at stage right. There were four more delicious offerings here! 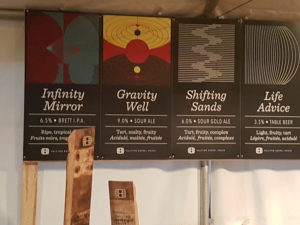 For my second beer, I decided to try “Life Advice,” similar to a radler, which is only 3.5% alcohol. It was a fruity delight and would be perfect for a sunny afternoon on a patio. There are many great choices for summer beer from local micro-breweries in Ottawa, and this definitely rates right up near the top with other competitor’s products. For Oktoberfest however, I found it a bit sweet and not really what I was looking for at this festival, but I enjoyed it nonetheless. Perhaps Saturday afternoon in the sun, it’ll be a perfect drink that I’m sure many people will enjoy. After wandering around the grounds in front of the stage, where I took in a few minutes of the IDALG concert (which was quite entertaining), I decided to check out the next beer tent, the Craft Haus, where there was a massive new selection of beer, which was totally unexpected!! 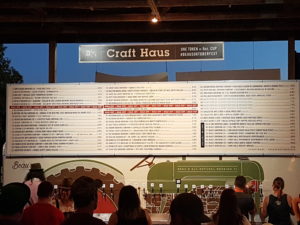 I wasn’t quite ready for my next sampling, nor ready to accept defeat in trying each beer offered at Oktoberfest, so I moved on without waiting in the line and decided to check out the other side of the festival.

Next up I found the Kissmeyer, which is a very hoppy beer (I missed that on the description), and as I’m not a huge fan of hops, it wasn’t my favorite but I drank it anyway happily. Next, it was time for some food. I was absolutely blown away by the row of food vendors that I encountered. I’m used to festivals with the usual selection of food trucks found at most outdoor events, so this was a pleasant surprise!! The selection was unimaginable, and I was so impressed, not knowing where to start! I began at one end of the row where I quickly found Rueben Egg Rolls. Those are two of my favourite foods, merged in a delicious combination of amazingness, so I definitely couldn’t miss out on that treat! It was Moose McGuire’s that offered this up, and for $8, I got three eggrolls and loved every last morsel of this appy. 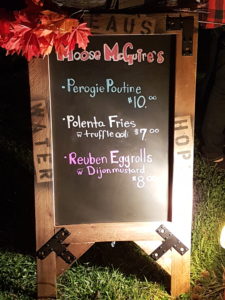 I would suggest everyone get these first to start their night and get warmed up for all the other options to be found. Unfortunately, everything looks amazing and there’s only so much food that one can eat. 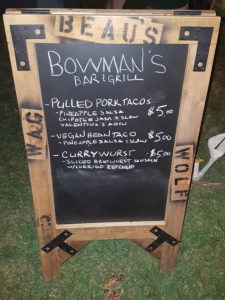 Next up, I ran into an old friend Peter, who owns Bowman’s Bar and Grill on Carling. His booth featured two different tacos and a bratwurst sausage bowl. Since each of these was delicious sounding, I ordered one of each. I had no regrets, as they were all amazing and I ate them up while enjoying beer #4! I chose the Maple Rush; it was a darker beer with the obvious taste of maple and a bold flavour. I rather enjoyed it, but this heavier beer wasn’t something you could drink a lot of without filling up pretty quickly. I was SO FULL after this beer and the delicious tacos and bratwurst choices from Bowman’s, but fortunately there were only a few different restaurants left after that one in the row so there wasn’t too much more to tease me. However, as I turned the corner, I discovered that there was a second row of food vendors! I couldn’t handle taking this in with such a full stomach, but I know for sure they had the likes of Whalesbone offering up their oysters, since I saw a few people walk by with them. So many delicious food options, and so little time and tummy space for all of them.

Finally, while finishing my walk around, I enjoyed beer #5. I chose a Farm Table – Dortmunder (I think I spelled that right). It was another darker beer but much smoother, and I loved it! Such a great beer to end the night. (I would have loved to try the coffee beer, but I forgot where I had seen it and my time was running short). There were so many more to go through, but there’s no possible way I could effectively sample enough of them and still write this review in a coherent manner, so I figured I’d stop at five, and begin my trek back to the city (thanks to my designated driver) ?.

Ticket prices started at $32.00 for single day entry, and were $45.00 for the weekend pass. Camping was very reasonably priced at $30.00, which is a great value, and will likely be what I choose to do for next year.

Oktoberfest is a really great event, and it is running all day Saturday September 23rd as well. If you get the opportunity, I would highly recommend heading out there. And if you can’t make it this weekend, keep it in mind for next year…it’s an event not to be missed, and I can say wholeheartedly that I will be back!