“Tacos are like what the voices of a hundred angels singing Bob Dylan while sitting on rainbows and playing banjos would taste like if that sound were edible.”
― Isabel Quintero 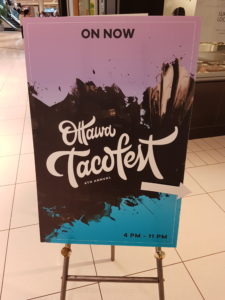 Today was the 4th annual Tacofest here in Ottawa held at the Shaw Centre. I decided to attend this event and have a look to see what it was all about, other than the obvious deliciousness that’s apparent in the name. The Shaw Centre is a magnificent venue for various trade shows and conferences and held to it’s reputation once again with Tacofest. Upon entering the building, I easily followed the signs to the check in desk and up the long escalator to the main floor for the event itself. The main reception area, located at the top of the escalator was filled with nicely decorated stand up tables and a series of bars offering a variety of drinks. There were ten bars set up from what I could count so little to no risk of line ups. The view was astonishing overlooking the Rideau Canal, the NAC and Parliament Hill. 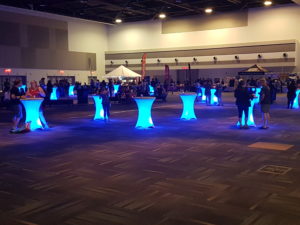 Once leaving the large reception area, the main room had dimmed lights where the tables were located but the vendors were nicely illuminated to highlight their delicious offerings. There were twenty-one vendors offering their take on the traditional taco and then another three offering dessert versions of the staple Mexican fare. Please find attached here my quick video of a walk by of each of the line of vendors. With so many in the room, I didn’t want it to be a 20 minute video demonstrating each of their menus so I tried to keep it a reasonably quick pass by so only 2 minutes to get a quick look at each vendor. ? https://www.youtube.com/watch?v=wOvOY3oJFiw

This is a daunting task to get around to each of these and I would be in shock and awe if someone was able to try each vendor, especially considering that most of them had 2-3 different items on their menus. However, at the entrance, each guest receives a menu for each taco that’s being offered so you can take time to plan your feast. I attended this event very hungry but I certainly didn’t leave that way as I had prepared for a massive amount of food. I was able to cram in 10 different offerings from the vendors, trying to get as many different types in as possible to create a valuable review.

Before getting into the individual reviews, I would like to note that it was very impressive as to how many gluten free, vegan and vegetarian options there were from multiple booths, so in future years, I would suggest you note that anyone with food sensitivities will still be able to enjoy themselves and leave feeling satisfied. 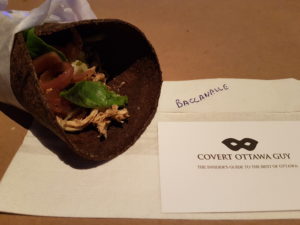 I sampled both the vegetarian and the non-vegetarian tacos at this booth. My review on the vegetarian will be below. For the meat-based taco, I chose “The Montego” Jerk Chicken Taco. I have to be honest here, I did not enjoy this taco at all. The soft taco shell had an unusual, ‘tough’ texture, which may be authentically Mexican, or Jamaican, but didn’t really measure up compared to the soft taco shells experienced at the other booths. It fell apart quite quickly while I was eating it, making it very messy. The jerk chicken, while boasting a nice flavor, didn’t really seem to work well with the wrap. It didn’t seem like a good flavor combination., Finally, the taco had minimal filling, making it mostly taco shell, which, as stated above, was not very good. I was disappointed in this taco, because I am a huge fan of Jamaican jerk chicken. But it just fell short on so many levels. 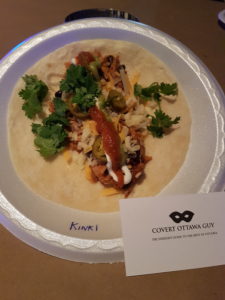 I really enjoyed this taco, if FACT, it was my favourite of the standard, non-specialty diet tacos. The pulled pork was cooked to perfection, both tender and flavourful. It had a very good variety of standard flavours (sour cream, salsa, avocado), and I appreciated this. Sometimes it’s better not to mess with a good thing! 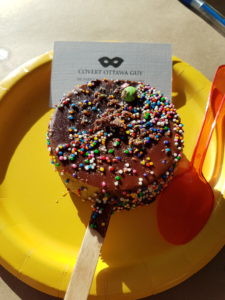 Oh So Good had three items listed on the TacoFest menu: a dessert taco, a cheesecake dip, and dessert nachos. For some reason, although I arrived early on in the event, they did not have the first two menu options. This was disappointing, as I had specifically selected the dessert taco to cap off my Tacofest experience. They suggested the dessert nachos, or a wide variety of other, non-taco dessert options. Honestly, it felt as if Oh So Good attended Tacofest to showcase their other desserts, and the booth didn’t fit with the taco theme at all. After telling me about their other desserts, I ordered a chocolate covered vanilla cheesecake. When I got to my table and cut into it with my fork, it wasn’t even what I had ordered, they had mistakenly given me the chocolate covered CHOCOLATE cheesecake. Don’t get me wrong, the dessert was very good, but the experience was a series of letdowns. I am a fan of Oh So Good, but didn’t really enjoy this experience. 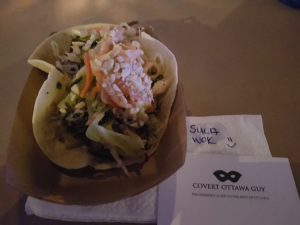 This taco was delicious, and I really enjoyed it! It was the biggest taco that I had, making it very filling! The Sweet and Sour Pork sauce was amazing. So flavourful! The taco shell was very soft, and tasted very fresh. The only complaint that I have about this taco is that it had too much filling; but let’s be honest, is that even really a complaint? Very, very good! 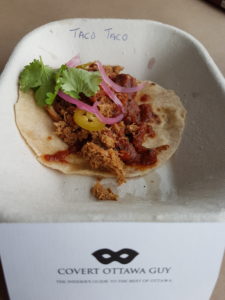 I was looking forward to this taco, but it sadly did not meet my expectations. The presentation was sloppy, and the taco itself had very little flavour. It was incredibly messy, and by the time I was halfway through the taco, the dish was covered in whatever sauce (a very liquid-y brown sauce), leaving the taco quite dry. 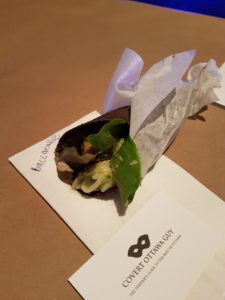 This taco also disappointed. It was the same soft shell as the meat-based taco they served, which was just not good. I only saw one chickpea in the entire taco. There were three tiny chunks of potato, the sole chickpea, the cabbage, and a sauce, but I don’t think that they put the cucumber chow on it. I requested it without onion pickle, so that was obviously left off.  I felt as if the filling was very minimal, and as I was not a fan of the taco shell, it was a let-down. 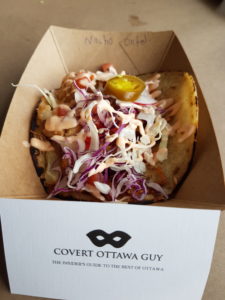 (Note: Nacho cartel offered meat tacos as well, but I opted for the Veg!)

I have to preface this review by saying how AMAZING I think it is that Nacho Cartel offered not ONLY vegetarian, but vegan and gluten free tacos as well. This taco was my favourite of the vegetarian tacos that I sampled. If you’ve never tried deep fried cauliflower, you really haven’t lived. This, combined with the delicious shell, the spicy mayo, and the sprinkling of veggies (including one delicious jalapeno slice!) made for a robust combination of flavours and textures that really impressed. I was perhaps even more impressed with the quality of service and the friendliness of the staff at the Nacho Cartel Booth. The guy who served me was so smiley, so friendly, so accommodating, that I really enjoyed the entire experience. Because I enjoyed it so much, I got the details on where to find them to share with all of you: www.nachocartel.com; you can also find them on social media, @nachocartel. Definitely check this place out if you are looking for a unique, friendly dining experience that caters to specialty diets. Tell them that Covert Ottawa Guy sent you! ? 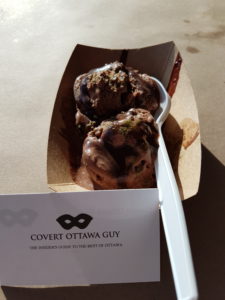 OAT & MILL’s Chocolate -Mint Fudge: ‘Chocolate-mint frozen treat in a waffle cone taco bowl with layers of fudge on top.’ (gluten free without the waffle, I opted to eat it in a bowl).

This was delicious and refreshing. Both vegan and gluten free (if ordered without the waffle bowl), it was simple, not as rich as one would think from the title. I wouldn’t say that it was ‘layered with fudge,’ which is really too bad, but it was a very tasty dessert. The presentation was also great. I wasn’t overwhelmed with the friendliness of the staff, but the quality of the product was definitely there, and I enjoyed it a lot. 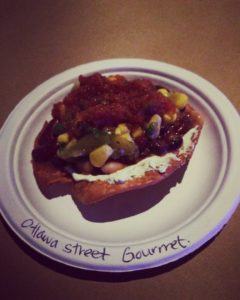 Another winner! Kudos and thanks to Ottawa Streat Gourmet for offering tacos that were Vegan, gluten free, and vegetarian (they had meat options, too!) it is so nice to see more and more restaurants catering to people with specialty diets!

This tostado was great. It was good to see a tostada available, as most places were serving only soft tacos, so I appreciated the change! This small tostada was packed with flavour. It was messy to eat, but it was hearty, with tons of toppings, so the messiness really just goes with the territory. The staff at the booth were very friendly, which I also loved. Finally, the addition of cream cheese was a surprising, yet delicious treat! Who came up with that?! Two thumbs up!

As with Sula Wok’s pork taco (see review above), the soft shell of this taco was delicious. Sadly, that was the only part of the taco that I enjoyed, I could only eat two bites of this. I didn’t enjoy the flavours of the tofu, and I felt as if there was far too much filler in it, with only a small amount of tofu on the very bottom of the shell. Now, I will say that all of the ingredients were fresh, and the staff was incredibly friendly, but this taco just did nothing for me.

Best Taco Overall: This one is a tie between KINKI’s Pulled Pork Taco and NACHO CARTEL’s Cali Cauli Taco. DELICIOUS!

Best Service: NACHO CARTEL, hands down. These guys were SO nice!

Biggest Regret not trying: RICO PERU’s Aji de Gallina Taco: As I mentioned, I could not possibly try everything, but this sounds amazing. I will without a doubt be trying this at some point in the future. Sorry, RICO PERU’s! I just had no room left!