Ottawa – Just days after the opening of the much-anticipated underground event, Kontinuum, two strange objects uncovered in the LRT tunnel are causing quite the shake-up. Ottawa 2017 organizers have looked to the Canadian Museum of Nature to identify the findings.

“Our team came upon two unusual objects on April 1 that were excavated from the Ottawa LRT tunnel near Lyon Station. One looks like a large egg, but it is completely round, unlike a bird’s egg, and the other object appeared to be a large fossil bone, perhaps of a dinosaur,” explains Guy Laflamme, Executive Director of Ottawa 2017. “These were so unusual that we took them to experts from the Canadian Museum of Nature for analysis. The preliminary findings are startling.”

Museum entomologist Dr. Bob Anderson reports that the fossilized egg appears to belong to a species related to tarantulas, only much, much larger. “I think that this size of egg would hatch a spider that would grow into something very large,” says Dr. Anderson, Director of the Museum’s Beaty Centre for Species Discovery. “And I mean really, really large. A spider like this might stand 20 metres high. For reference, I would say it could be double the size of the Louise Bourgeois sculpture “Maman” that stands in front of the National Gallery.”

The fossilized bone found in the LRT tunnel has led to no less fantastic conclusions. Museum palaeontologist Dr. Jordan Mallon reports that the bone is not fossilized, but simply very well preserved, a function of its being found in a clay deposit. He says it is not a dinosaur bone as originally suspected, but appears to belong to a species closely related to the Komodo dragon and dates to more recent times.

“Well, the DNA evidence indicates that this creature’s closest living relative is the Komodo dragon,” says Dr. Mallon. “I don’t know if there was something in the water around Ottawa in the past but like my colleague’s discovery, this creature looks like it would have been extremely large by today’s standards. It would be superficially similar to the largest of dinosaurs, like a titanosaur, only a definite meat-eater.”

One can only imagine what these creatures would look like in real life. “Well, I would think that a spider of this size would occupy an entire street width and reach above many building rooftops,” explains Dr. Anderson. “At least there is no scientific evidence of these ‘dragons’ breathing fire,” laughs Dr. Mallon.

“But, of course, I suppose, technically speaking, there is no evidence that it didn’t either.”

“Ottawa 2017 is about celebrating Canada now, our past, and our future,” explains Guy Laflamme Executive Director of Ottawa 2017. “This amazing discovery shows a distant past in Ottawa that is no less than startling. It makes us wonder what the future could bring…”

As most of you know, Ottawa is celebrating the Canadian 150th birthday by creating a series of “Ottawa2017” events that are running throughout the year. There have been many events held already including the Juno awards, Picnic on the bridge, Red Bull Crashed Ice tour and Sky-Lounge. There is an ongoing series of “Ottawa Welcomes the World events” showcasing different nations and their cultural additions to the region, and still others to come such as the Grey Cup. However, in my opinion, the most extravagant event celebrating Ottawa2017 is La Machine.

This French company has now made their first trip to North America, choosing Ottawa as it’s stop. They feature giant “robots” (for lack of a better word) that walk around in a city setting.

The two featured characters are: “Long Ma”, a half horse, half dragon, fire breathing creature who stands 12 metres high, 5 metres wide and weighs 45 tons, and; 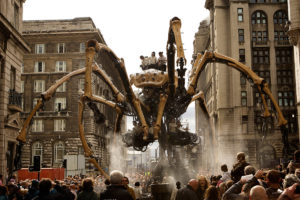 “Kumo”, a giant spider who in resting position is only 5.7 metres high and 6 metres wide, but can reach up to 20 metres when fully extended.

The official story behind these two characters is as follows:

“From the ninth level of heaven, Long Ma—a cosmic creature who is half-horse, half-dragon—keeps watch over humanity. But a sinister force that has taken the form of a giant spider slips into his home as he sleeps, burning his wings and robbing his sacred temple. From this time forth, the Dragon-Horse roams the seven seas in search of his missing temple.

The giant spider, Kumo, takes refuge in Ottawa, the mother-city of all spiders. Buried deep beneath the waves, the temple remains concealed. But the recent work undertaken by the city to build Ottawa’s new transit line has disturbed Kumo, and she is forced force to emerge from the ground. Her power depleted, the spider becomes vulnerable and loses control of the temple, which reappears in the city. Alerted by this apparition, Long Ma sets out on the route taken by Champlain several centuries earlier, with the intention of recovering his temple of travel, a shrine that he alone has the power to properly restore.”

With a show of this magnitude, there will be a large impact on the streets of Ottawa commencing this Thursday, July 27th and running through the weekend allowing traffic to return to normal (whatever that may be for Ottawa) by Monday morning. I have attached the official city of Ottawa road closure maps here for your reference: http://ottawa.ca/en/la-machine#maps

As stated, La Machine will run for four days at various locations throughout the downtown core, including City Hall, the Byward Market, the Supreme Court of Canada, The National Gallery, and the War Museum…plus all the roads in between. The schedule is as follows:

8 pm – Kumo awakens near the National Gallery of Canada

11 am – Kumo Walkabout: By Ward Market

9:30 pm – STATIC SCENE: Kumo and Long Ma at the Supreme Court of Canada

2:30 pm – Kumo Walkabout: departs from the Supreme Court of Canada

The City of Ottawa is suggesting to give yourself plenty of time to get down to this event as very large crowds are expected at all times of the show. The weather is finally looking pretty cooperative for such an epic event. I’m so excited for this show, and have been ever since watching my first YouTube video of what they do when they were first announced. So get down there and take lots of pictures as something this enormous probably won’t be back again. Enjoy!!